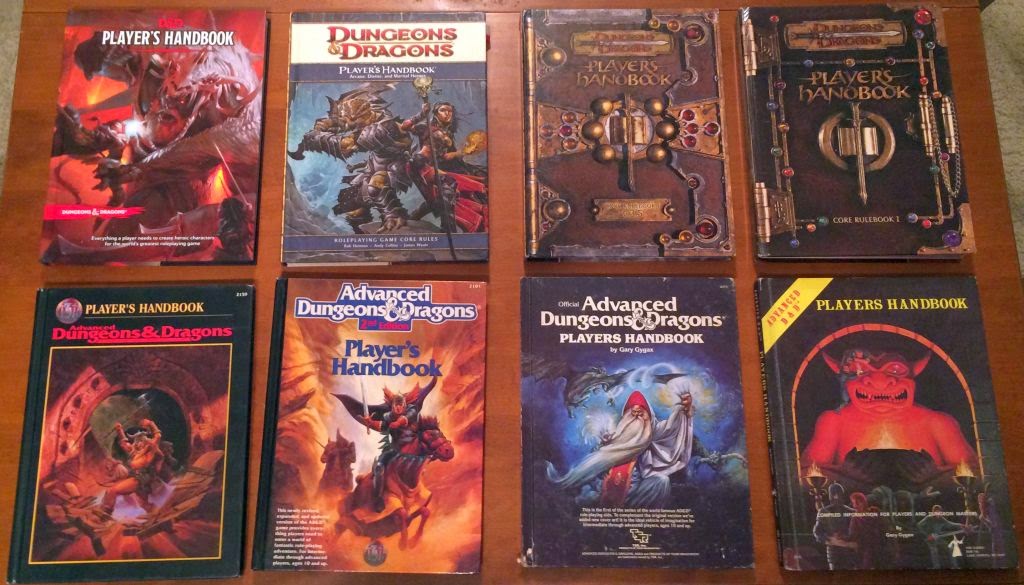 Yep, that's all of them. Bottom right comes in about 1980-81 for me (and yes that's the same book I bought with my allowance back then) and that upper left showed up on my doorstep yesterday.

I've had a lot of fun with these over the years and I can tell stories that came from games played with all of the previous versions. Even though I am still running Pathfinder and 4th edition games I am sure we will get around to giving the new one a try and then I'll have some stories to go with it too.

There are memories around the time each of these came out too. The joy of discovery, when all of this was so new with the first; the college days playing in dorms and at night at the IHoP of second; the fun of putting a new group together with old and new faces and new versions of classic adventures with third; the annoyance and disappointment of fourth gradually turning into a rediscovery of the fun and putting together another mix of old and new - including a new wife and some new kids; with 5th, well, right now it's all kid milestones for the last month - a 12th birthday, a lot of summer band practice, driving to and from the first job, and moving into a college dorm. If 5th has a good enough run, they may ALL be in college by the time 6th comes out.

PDF's may be the future of a lot of smaller RPG's, but I hope the biggest games, or the kickstarters for smaller games, give us a chance to acquire them as books. I'm pretty comfortable using an iPad at the table but there's something about being able to pick up the same book I held way back when that helps refresh those memories too - it's more than visual, it's texture, smell, weight, and all of the little nicks and dings they pick up in use. I'd say the largest ingredient in some of my AD&D materials after paper, ink, and glue is probably Domino's Pizza and Dr. Pepper. I took pretty good care of my stuff but hey, accidents happen, and Domino's was new here back then. We spent a lot of summer time scraping up our dollars so we could order pizza and keep on playing, especially before we could drive.

Anyway, I suppose I've "completed the set" for the time being - now to read the thing, and start the next chapter of a 30+ year story.
Posted by Blacksteel at 12:00 PM