The Game That's On My Mind This Week: Traveller

I've been re-reading the Mongoose Traveller main book this week and it's amazing just how well the system hangs together. Traveller was probably the first non-D&D RPG I got into , around 1981, and the Mongoose version is very similar to that original set of little black books yet it feels very modern in many ways too.

Looking back on the multitude of sessions I've played and run with this game I can say that almost all of them were set in the Third Imperium and almost all of them eventually involved some illegal activity. Sad but true...maybe the game needs an alignment system... 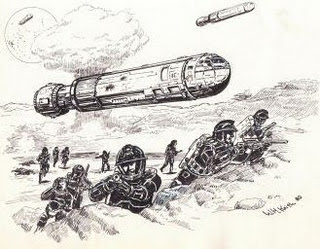 One other thing that strikes me is that most of the time players want to operate at the higher end of the tech level scale - anything less than TL15 is weak and needs to be upgraded as soon as possible. I blame the setting info that the Imperium is TL15 as setting the bar a little higher than I would like. This has gotten me thinking about a different type of campaign - what if you held on to most of the basic Traveller assumptions but dropped the history and assumed that TL10 was common, TL11-12 was cutting edge, and TL9 was where most people operated, especially interstellar operations. Lowest common denominator means it's easier to find parts and crews and probably cheaper too.

This would keep the most common jump capabilities in the 1-2 range, keeps things in the sweet spot for a lot of gear (giving your mercenaries somewhere to climb to that doesn't involve fusion guns), and provides a better explanation for why so many spacers run around with shotguns and cutlasses instead of lasers and plasma guns. 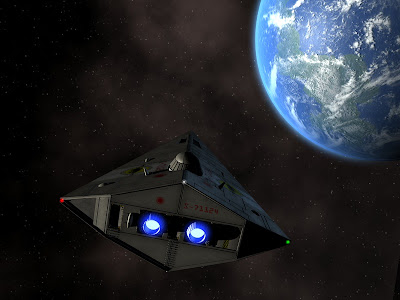 Politically I see it as a region of individual systems with a few extrasystem colonies discovering and competing with each other in an economic and military sense but without open warfare just yet. I see it as a post-collapse recovery but with whatever interstellar empire once existed being a vague legend. 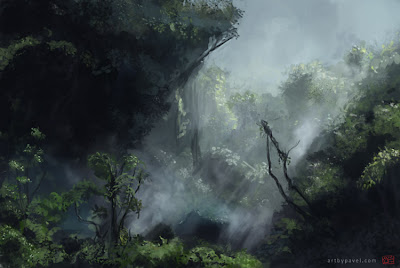 What would characters do? The traditional merchants and mercenaries campaigns are an option but so would a "Shadowrun" type game where the PC's move in between the major players as independent free agents. If someone is a scientist or academic then the discovery of ancient tech (TL15 maybe) could lead to a surge of interest in archaeology (and the men with guns who guard that work). The lack of knowledge of what's in every single system would make it much easier for pirates to operate and a campaign could go hard in a "Pirates of the Stellar Caribbean" way. Combine that with the ancient tech plotline and you have a lot of material to work with and a lot of directions to go. Merchants could be part of the regular supply run to a dig site. Agents might be infiltrators from a corporate entity or rival government that wants to keep an eye on things. Drifters might be hired for basic labor tasks like digging. I think having a solid outline for your initial adventure or starting situation makes it easy to include almost any character type - then let events run their course and see what the players do.

I guess that my point is that it would be refreshing to run and play Traveller in an area where everything isn't "known" but not where galactic society is in a total dark age with unrepairable declining tech ala 40K and early Battletech. I thnk there's a fertile middle ground that I know I have yet to explore where the tech is higher than our world today but not dramatically so and where some of the big picture is visible and the rest begs to be explored - preferably by player characters.
Posted by Blacksteel at 11:43 PM No comments:

Blast from the Past

Digging through the pile of papers and CD's under my desk I came across a soundtrack CD I burned for one of my 3E campaigns. It still worked and kind of got me back in that mindset for a little while.  Here's the track list: 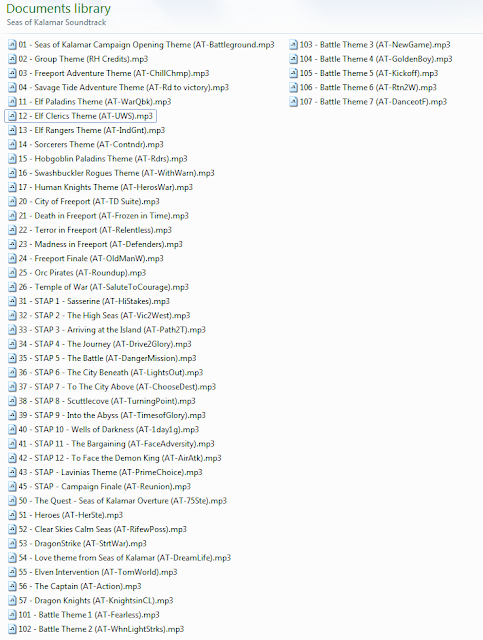 The notation for most of those means "Autumn Thunder" the NFL Films soundtrack collection from a few years ago which is surpisingly handy for a lot of RPG type background music when you've burned out Conan & LOTR and should be useful even for some non-fantasy games. 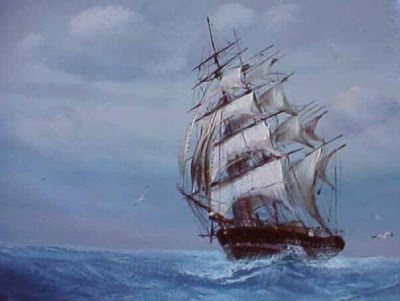 This campaign was a combination of the Freeport adventures and the Savage Tide adventure path from Dungeon and I was pretty fired up about it. Each character got a track, each adventure got a track, and there were others beyond that. I have more detail in this post.

It went over pretty well, but I have yet to do it again. Accounting for character death and replacement was tricky - new track? Replace the original track? I just left it unchanged for the campaign and decided I would do a "Remastered" version if we ever finished. As it turned out we did not, so I never had to undertake it.

I compiled this one pretty much solo. Next time I might ask for more player input on their personal themes, but that can drag things out. It was pretty satisfying having this ready to go for the very first session, running it in the room while eats and drinks were prepped and dice were warmed up. I'm going to have to take a look at doing it again, just to see if I can improve it.
Posted by Blacksteel at 12:00 PM No comments:

I don't want last week's pondering to make it seem like I'm all down on the future of RPG's. Though there's not a ton out there right now that I want but don't already have, I did see some things coming next year that I am very interested in. 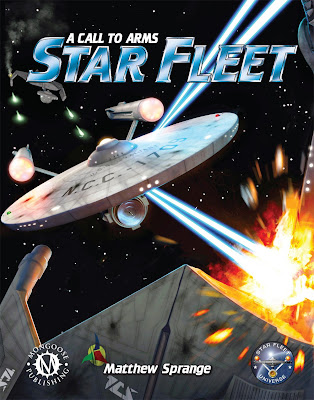 Last but by no means least, a new universe will be coming to Traveller. Under our agreement with Amarillo Design Bureau, we were to produce a Star Fleet Universe edition of A Call to Arms and, in return, ADB were to produce a Traveller edition of their Star Fleet Universe game, Prime Directive. This will appear in 2012, and we have requested it cover not just Federation away teams and independent free traders, but bridge crews for, well, all the key empires – here at Mongoose, we can’t wait to jump in with a Klingon bridge crew campaign! 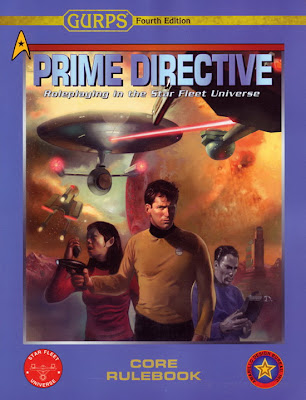 Prime Directive is Original Series Trek split off before any of the movies or Next Generations took place. There's a ton of background for it developed over the last 30+ years with Star Fleet Battles and there have been RPG versions in the original system, d20, and GURPS but I think using Traveller could lead to the best system yet by far. There's a lot going on in the Star Fleet Universe and finally having a decent set of mechanics to play it should be a lot of fun. 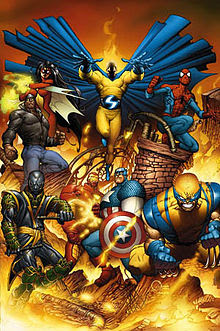 I think this was announced at GenCon but I had forgotten it, then I ran across it while catching up on Vigilance Press podcasts. I have not been a fan of MWP's products thus far - Smallville, Leverage, etc. as they were just not my cup of tea. Their existing system was somewhat similar to Savage Worlds, I know, but I'm guessing it will be tweaked and tweaked hard for Marvel. I don't know that it stands a chance against M&M3/DCA with a lot of people but I'm happy to see it being worked on and I'll give it a look when it comes out. The basic book is supposed to be based on the beginning of New Avengers (the breakout) and then the 3 big releases will cover Civil War, Annihilation, and Age of Apocalypse - sounds pretty solid to me.

So there we go: two solid, interesting products for 2012! Familiar universes, no doubt, but with a different spin that should be worth a look. 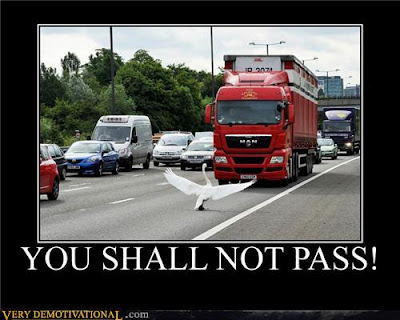