End of the Week Thought


I will finish the other half of the 40K box exploration, and I have an idea for an interesting series of posts later this month, but this week I realized something


By the end of this year all of those things will be out of print/over/gone.

Now I don't think of any of those as particularly exotic so I don't think this is me picking oddball games from dodgy independent publishers - this is just a weird coincidence. Regardless of status, I expect the 4E train will be rolling into 2013, 40K will probably be played more as we explore the new edition, and as for COH ... well I'm not sure what we will do there. I'm not that excited about any of them right now. Heck, Mechwarrior Online looks about as enticing as anything out there but it's an entirely different kind of game.

Posted by Blacksteel at 4:39 PM No comments: 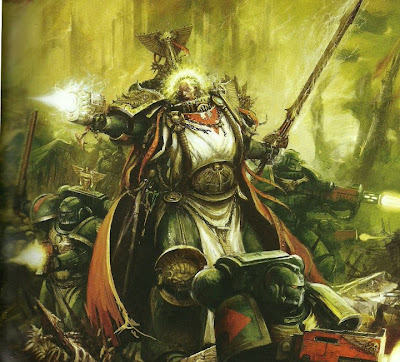 I thought I'd take some time and go through the new 40K boxed set since it's the Project of the Week around here. For tonight we'll look at the set as a whole and the marine figures in particular. 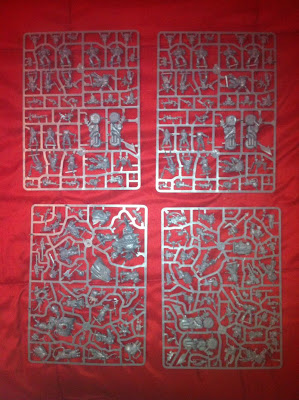 We start with 4 sprues of plastic which will end up making 48 miniature figures. Considering the price is right around $100, you're getting them for around $2 each, which is as cheap as you're ever going to find new 40K figures. Two of the sprues are the same which is what makes up the bulk of your marine squad and your chaos cultists. It breaks down to 20 marines vs. 28 chaos figures. 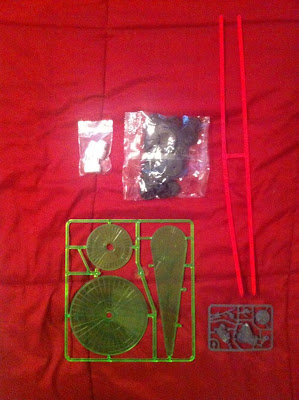 But wait there's more! You get the bases for all those figures, some dice, and those nifty neon green templates for playing some of the more fun weapons in the game. Also, if you act now and find one of the Limited Edition intro sets you get an additional special character mini, bringing the total to 49! 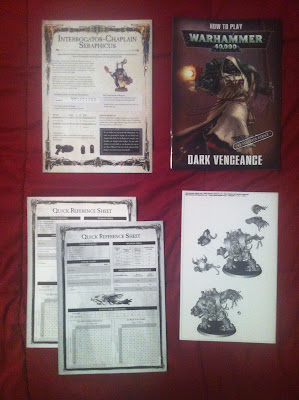 There's also the info card for said character, an introductory booklet, 2 quick reference sheets, and an assembly guide. Plus a rulebook! Which I did not think to include in this picture! 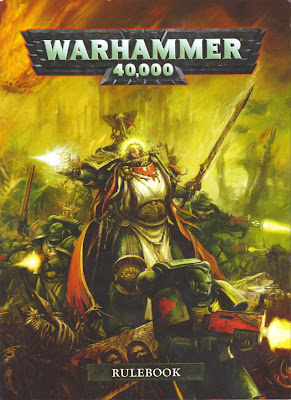 Ah, there it is. This one is about the size of the Savage Worlds Explorer Edition rulebook. Considering the Big Daddy version goes for $75, weighs about 10 lbs, and counts as a tactical vest, I like this one for ease of transportation.

So if you spend an hour or so working on the sprues you can get this:

That's with just a knife and some quiet time. They're "push-fit" or as we used to call it "snap-together" and they are perfectly playable like this. I didn't do the bikers yet because I'm not sure what I'm going to do with them. I like bike troops and they are stronger with the rule changes in 6th Edition, but I was planning to use bikes in my chaos force, so they may turn traitor...

The tactical squad is nice, including a plasma gun and a plasma cannon (heavy plasma gun for us old-timers) and a sergeant with a plasma pistol - hey, did you known the Dark Angel marines are known for (among other things) their love of plasma weapons? Subtle! It even includes a pair of beakie helmeted marines, another nice touch.

The terminator squad is really nice - I love that winged helmet/shoulder thing - and it comes with a decent weapon loadout. Sergeant with a power sword, 3 termies with powerfists, and one with a chain fist, and the assault cannon as the heavy weapon - that's just about perfect. The poses are nice too, being a little more dynamic and a little less "hulking brute looking straight ahead".

For regular troops these things are covered in detail, which is awesome if you're playing Dark Angels but a huge disadvantage if you're not. It's difficult to even use them as a successor chapter as the winged dagger icon is molded into the shoulder pads of every model, and it shows up in a lot of other places too, from jewelry to backpacks. It seriously compromises the flexibility of this starter set, the components of which tend to become very common for that edition as a lot of people buy them. They get parted out on ebay too which is nice if you are playing an army that can use them. I'm not sure that's going to be as popular this time. 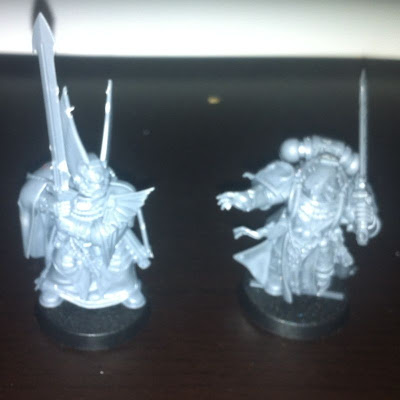 On the left is the captain and he has a seriously cool helmet, along with the giant power sword. I may steal that head (it's a separate piece) for my Howling Griffons- hey, Griffons have wings too.

On the right is the Librarian, which is 40K's confusing name for psyker marines. One of the other things DA's are known for is wearing robes, especially hooded robes, over power armor. I think it lends them a bit of a Jedi look and I think with a few changes this guy could easily find a home in a Star Wars campaign too. That outstretched hand just screams "Force Lightning" to me.

Yes, both of these guys are covered in detail which is nice but does have it's downsides, though I expect it on the leader figures so it's less of a downside here. Painted up they should look pretty good. It's easily the most detailed set of mini's that's ever been in the starter box... 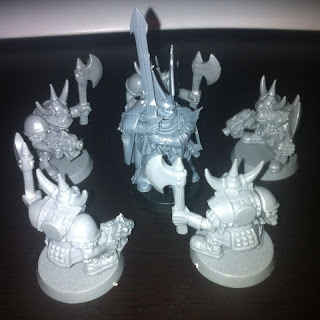 ...although the boyz from the Second Edition boxed set apparently do not agree. Roll for initiative! Wait, wrong game! Draw cards! Check reaction speed! Darn! How did that work again?

(And yes, there's an example of how ubiquitous these things can be - twenty years after its release you can buy unpainted ork boys from the 2E set on ebay for dirt cheap. I doubt this one will be quite as common but the newer mini's are quite fancy in comparison.)

The final take? It's a solid force, giving you 2 (3 right now) HQ units, a troop squad which can be broken down into 2 Troops, an Elite squad, and a Fast Attack choice which can be easily expanded. Trading the chaos figures for a buddy's DA figures would net you two full tac squads, two termie squads, and a 6-man bike squad, plus a bevy of HQ options, which is a pretty strong starting force too. If you like Dark Angels over your other space marine options - or if you like Chaos - , it's a great deal. If not, well, it's less clear that this is a good idea. If you're just starting out it's still good for the other things in the box, but even then if you don't plan to play either army then it might be better to go rulebook + separate templates, ebay for small rulebook + non-mini contents, or trade with a buddy who has an army you do like.

Next up: The spiky stuff!
Posted by Blacksteel at 10:57 PM No comments: 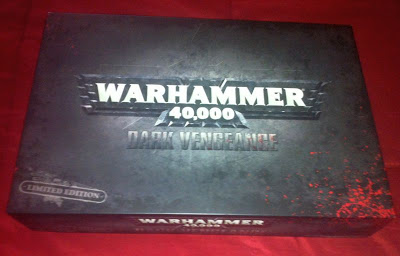 Well we didn't get any RPG time in this weekend, partially due to kid discipline - don't do what you're told, I'm not running D&D. Yeah, it's a weird place to be but hopefully it will be effective.

While they were busy finishing projects and homework and not playing D&D, I was busy reading our newest   acquisition - yes I went ahead and took the plunge. So far I like what I see with one large note: The figures in this box are far less flexible than the ones in the 5th edition boxed set. This one comes with Dark Angel Space Marines and a Chaos force of marines and cultists, and if you don't play one of those two forces then you would be better off buying the rulebook by itself. More on this on Friday's post.

Also this week: reading more classic Champions stuff, 50 Fathoms, and trying to get the main D&D game up and running again. Fall is tough with all the kids school stuff but we will get it started again one way or another.
Posted by Blacksteel at 12:00 PM 2 comments: 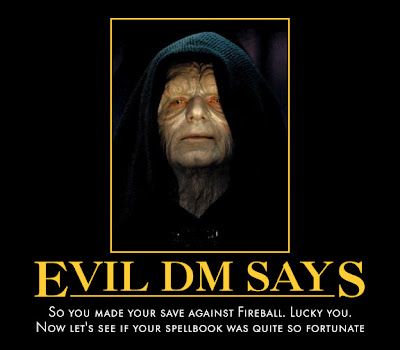