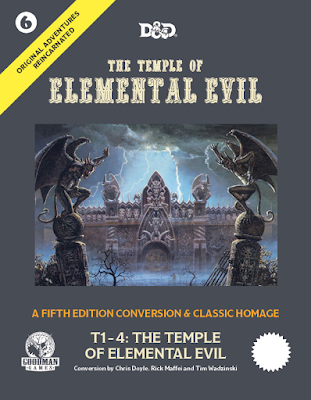 Well, this was announced over the weekend. I'm in.

I have their first 3 books: Into the Borderlands (B1 & B2), Isle of Dread (X1), and Expedition to the Barrier Peaks (S3). I've run a group all the way through Borderlands, and the same group through most of Isle of Dread and they are excellent - if you like those old adventures.

I do not have the 4th - The Lost City or the 5th - Castle Amber. I don't think they're actually available just yet but those don't carry the impact for me that the others do. I liked Lost City but I didn't play it as much back when and it's kind of a self-contained campaign all it's own. Castle Amber was even less "my thing" back then - I didn't really care about puzzling out the politics of a family of crazy people when I could be doing .. .well ... pretty much anything else in a D&D game.

But this ... ToEE is potentially a cornerstone adventure for an old school campaign - particularly a Greyhawk campaign. Most of my 5E experience has been running old school adventures so this would make for a nice second campaign option in that vein. I've been running everything in the Realms thus far and I would probably do the same with this. For the Realms I already worked through whether to put it in Impiltur, settled on the Dalelands, and then agonized over the backstory. So a lot of the work there is already done.

There is some temptation to open up Greyhawk here, though I'm not sure it's worth the separation from the other campaign. Placing them both in the Realms opens up some crossover potential and other interesting possibilities.

Ah well - it's a good problem to have. More to come I'm sure.
Posted by Blacksteel at 5:30 PM No comments: