So this came thru over the weekend:

The East Africa Sourcebook. On DriveThruRPG.

From the deserts of Somalia to the Serengeti of northern Tanzania, the waters of the Indian Ocean to the jungles of the Congo, the East African/Kenya Sourcebook, the first new canon work for Twilight 2000 since 1995, shines a light on an area hinted at in previous works but never before detailed, where what is left of civilization in Africa struggles against the Somali Islamists, the PARA, the LRA and desperate pirates whose only mission is to take what they can from what still stands.

The Sourcebook contains a detailed order of battle for the American, French and Rwandan forces in the area as well as for their foes. A timeline is provided that shows how WWIII came to Africa, including the nuclear strikes that devastated much of the refinery production in Africa, leaving the refinery in Mombasa as the only hope for the Americans to provide the fuel the that keeps CENTCOM supplied in their continuing fight with the Soviets in Iran. The continuing struggle of the French to build a new Empire from the ruins of Africa come alive in the Sourcebook,  detailing their triumphs and missteps, including how they assisted the LRA to power in Uganda.

For those looking for new challenges and new adventures, the East African/Kenya Sourcebook provides them in spades offering everything from fighting a military campaign against the PARA and the Somalis, to convoy escort duty against pirates, to deep patrols trying to destroy terrorist bases or to find useable aircraft and supplies to keep AFRICOM going now that no more will be forthcoming from the United States.  For those who wish to be mercenaries, either in the employ of others or building their own “kingdoms” in the ruins of Africa, there are opportunities a plenty.

Here's a link to the DTRPG page. 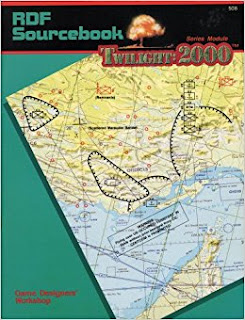 Well, it has been a while. How many people still care enough to make this worth doing. There are multiple comments on the page above so clearly at least a few people are paying attention. I have to wonder though - how many T2K campaigns are happening right now around the world? Say meeting once a month or more? Ten? For all editions together I suspect it's a really small number.

I don't say that as a slam. Twilight was one of my favorite games of the late 80's and I have almost all of the books for both 1st and 2nd edition. That said it's a hard sell these days - not many players are interested in a realistic retro take on a war that never actually happened. If you look up "simulationist" in the gamer dictionary this might be exhibit A and those do not seem to be anywhere close to popular today. Neither do "crunchy" as in rules nor "alternate history" other than steampunk or modern + magic type settings. Twilight doesn't do magic, unless it's the magic of letting your M214 portable minigun saw through a humvee and all of the raiders inside in a single combat round.

If I was trying to get a game going today I'd probably pitch it as "like The Walking Dead but without zombies". It might sound odd but it's the closest thing I've ever seen to a T2K campaign and covers a lot of the same scenarios and situations.

I don't know if I will ever run (or play in for that matter) a sustained T2K campaign. Finding enough players to do it right now is damn near impossible and I don't see how the passage of time will make that any better. Maybe at some point the retrogaming thing will sweep these kinds of games up into a popular movement once again but I suspect it won't be anytime soon.

Regardless, I admire GDW for keeping some of the non-Traveller stuff alive. In a world where there's Yet Another Version of tiny-booklets D&D every month I am glad some of the other classic RPG's are still available in some way.
Posted by Blacksteel at 6:00 PM No comments: