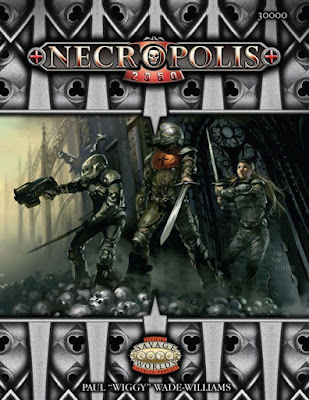 Sometimes expectations can be a problem. Necropolis 2350 is a campaign book for Savage Worlds that has been out for a few years. I thought I had a pretty good idea of what it was about. I finally picked it up last year but I didn't actually read it until recently because, you know, I already knew what it was about. As it turns out I was off.

I had heard this was a gothic sci-fi RPG with armored hi-tech knights fighting weird undead type creatures invading a world. "Like 40K" was the shorthand description. Hey, that sounds great - a not-40K setting for a system I really like! After reading it I don't think it feels like 40K much at all and ... I don't like it all that much. This is surprising considering how much I have liked the author's other work on Savage Worlds in general and Slipstream in particular.

What don't I like? Well, first up the book starts with about 50 pages of knightly orders, character options, and gear. There is a half-page summary of the setting then it dives right into details on vows and knight training. With an entirely new setting I need a little more background before I start picking through the minutiae of which ordo I want my character to join. The knightly order stuff is all very historical and there is plenty of Latin used for titles etc. You will end up playing a knight in modern armor (not power armor) using marginally effective guns and swinging a sword. There are at least rules for tanks and airstrikes so it's not totally retro.

The reason the knights are the core player option is that the church controls everything. This monolithic church came about 200 years ago after the discovery of the first habitable world other than earth  caused a worldwide religious revolution that ended up uniting all the beliefs of mankind. Somehow that ended up looking a whole lot like the classic medieval Catholic Church complete with a Pope and bishops and inquisitors and knightly orders. There's a 10 page section all about the church. There are lots of different sub-groups within the church and to be honest there is nothing terribly original here. I didn't find anything here that made me say "wow that sounds really cool" or "I can;t wait to tell my players about this".

The corporations also apparently control everything and there's another 10 page section about them. They're mainly an "NPC" thing as the book is heavily aimed at PC Knights and the corporate info is in the GM section of the book. Unsurprisingly they do not always get along with the church or each other and there are various secrets and competing agendas present. Again, there was nothing here that made me want to play in or run this setting. If you've spent any time with Shaodwrun or any cyberpunk game or sci-fi settings like Traveller that feature megacorps then you've seen this before. 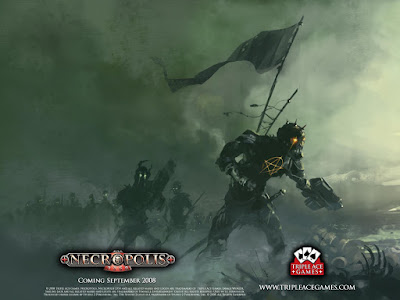 The other big general setting chunk is on the Rephaim - the enemy faction of the setting. They are undead who are attacking the world. Motivation "...an insatiable drive to destroy the living" - no complex motivations here. Not to convert or rule - to destroy. Also, the Rephaim are literally made up of the classic undead types - Liches, Mummies, Vampires, Skeletons, and Zombies. This is where it really fell apart for me. At least Mutant Chronicles (a more similar type of setting than 40K) invented some new types of undead-ish monsters and gave them original names - Necromutants, Razides, etc. Here it's your bone stock undead types you know and love from D&D and most other fantasy RPGs with guns and some weird science options and the usual magic too.

A few other setting notes; FTL drive was invented 300 years ago. About 200 years ago the only habitable planet was discovered (which is where the game is set) and named "Chalcis". World War 3 broke out 150 years ago and in the aftermath the church took over and the corporations rose as well. The Rephaim started attacking the colony about 40 years ago. Right after this the church moved its HQ from Earth to the colony and renamed it "Salus". Then, a year later, the Earth was destroyed. Over the next few decades The church took more and more control over the world, coming into conflict with the corporations as it fought the Rephaim. About 16 years before the game starts the world is "unofficially renamed Necropolis".

Picking up these details one jumps out at me in a hurry - What destroyed the earth? In the book it's "cause unknown" - what? There's no implication it was the Rephaim (who are sort of limited to this system anyway). What happened? It's not really even discussed as one of the big mysteries of the setting. Did anyone go back and take a look at it? There's no mention of all FTL ships being destroyed or lost so I would think they had an option to do so.

Also, why do they keep renaming the place?

This is probably my biggest problem with the book - the setting just doesn't hold together for me. If you just want an excuse to take swords and guns against a bunch of undead I suppose it's alright but there are a lot of pure combat games out there already. The knight/church stuff seems very dry to me, the corporate stuff is nothing new, and the enemy is also very familiar. Space and space travel is almost entirely ignored. The whole thing feels like a lot of well-known parts thrown together in an attempt to make something cool and fun but it just doesn't do it for me. As a guy who likes stuff like Warhammer 40,000, Mutant Chronicles, and Shadowrun, if I'm not the target audience then who is? After reading through it several times the game's main problem is that I'd rather play any of those other games than this one.

It's a science fiction game but:


I just can't find anything to get excited about here. If you want a war story there are better games (from Star Wars to Only War to Weird Wars). If you want to run around as a badass with swords and guns and don't care much about space travel there are Shadowrun, Cyberpunk 2020, Gamma World, Hell on Earth, Slipstream, and Deathwatch. As much as I wanted to like this game I just can't recommend it over any of those others.