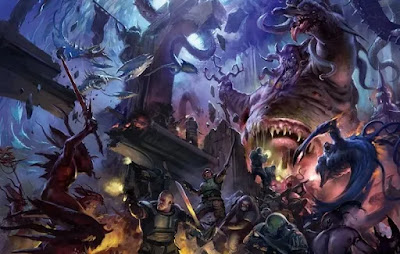 Fittingly, given some of the other things going on,  2018 was mostly dedicated to Chaos. I did some further work on my Iron Warriors and World Eaters but the main focus was on Daemons.

First up was finishing the Nurgle part of the force which I did. In fact it's the one "completed" part of the army. It's 3 Soul Grinders and a Daemon prince so while it's not quite that simple it is only 4 models.

Khorne was supposed to be the bulk of the force and it is ... it's just not quite all painted yet. It's my usual trap: I have a bunch of stuff partly to mostly painted and nothing actually finished other than some of the old metal Bloodthirsters. Painting is very much a "when I feel it/what I'm feeling" kind of process for me so it's very uncommon for me to start one unit or model and carry it all the way through to "done" without starting another unit (or six) in between. It's something I've been working on improving for the last year or so but I have yet to attain total compliance. It's mostly the same force as described here, but I've added more Bloodcrushers (because I just like them, not because they're dominating on the table) and more hounds but that's really it. By the end of 2018 I had acquired, built, played multiple games, and partly painted a mixed Khorne/Nurgle daemon army. I need to play them again and see if I've learned anything in the past year. 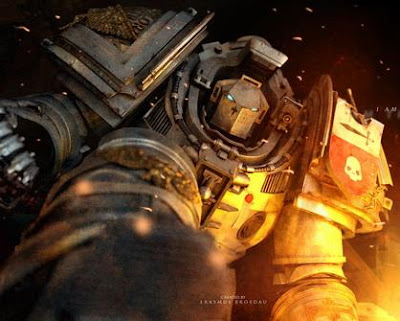 The other army that had my attention for the year was the main opposing force for Chaos Daemons - Grey Knights!

The army itself is already summed up pretty well here. I have since added more Paladins, and Ancient, a Medic, a Brother-Captain, and a third Dreadknight. It's about 2700 points now and doesn't feel like it needs much more. I might bulk out the Strike Squads to ten each just to have the option. I might add more Paladins just because they're cool.

One thing I have avoided is adding the big expensive units - Land Raiders, Stormravens, etc. GKs are expensive enough already so I'd rather have more squads than a 300 point tank or transport. With every unit being able to teleport or deep strike there's not a huge need for transports so I'm holding that at the 3 Razorbacks for now.

I haven't played them yet,. At all. yes, I have nearly 3000 points of these guys with zero 8th edition games played. I know ... I know ... Hey they're almost all painted at least! That counts, right?