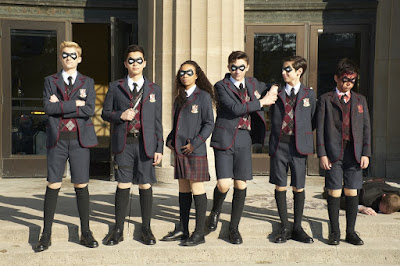 Feels like I should catch up on some things after so many gaps this year so I'll be doing that this month. One big thing - lots of super-activity this summer!

Several independent super-shows came along earlier this year and I feel very differently about each of them so let's start with Umbrella Academy. I have not read the comic books or any other version of the story so I was coming in cold. It seems like it was fairly popular on Netflix but I have to say I was ... underwhelmed.

What happens at a reunion years after a kid superhero team splits up? Well ... they all hate each other so they spend a lot of time bickering and not a lot of time doing super stuff. I mean, I get the "dark", the "modern take" - or is it "postmodern" now? I forget. I kept feeling like the stuff they were doing in the flashbacks would have been more interesting than what they were doing in the "now" of the show.

First up - the Attitude:

I don't mind having one or two "dark" characters on a team show but when the whole team is that way ... it's a lot.

Was this originally a completely different story? Was it just grafted on to this one? Because there's nothing terribly original or interesting about it and it really doesn't add that much to the main plot. maybe it was supposed to be the lighter or funny element of the show but it's just not that much.

Even with only ten episodes it feels like there was not that much story here. Trim out the 90% of the Hunters story line that was unneeded and you could have cut this down to 8 episodes, maybe less. I mean you have a team of 7 super characters, a stern father figure running them, a chimpanzee major domo, a robot mother, and time-travelling assassins and yet it somehow feels like you didn't have enough to fill out ten hour-long episodes of a TV show.

I did stick with it through the end though I considered dropping it multiple times as I was watching. I was curious how they would resolve the big plot ... and even that was a disappointment! Get to the last episode, things are unfolding, and  - welp - see you next season??!! It's cheap and artificial. I'm still debating whether I will even watch the next season after that. 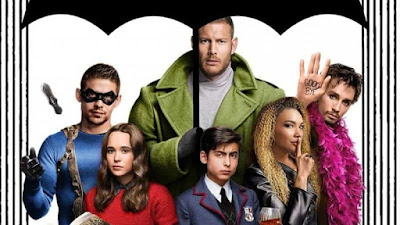 The thing I liked most:

Mr. I-see-dead-people #4 triggers a device and finds himself in the Vietnam War. We don't see much of it in real-time, mostly it happens in flashbacks throughout the following episodes but he spends a year there, develops a significant relationship, and lives through some pretty rough stuff before he finds his way back. In one episode he goes into a VFW post and starts crying over some old pictures -which he is in- and then gets into a fight with the older members who are inside and think he's being disrespectful. It's funny, touching, and wrong on some level and to me it was by far the best scene in the whole show.