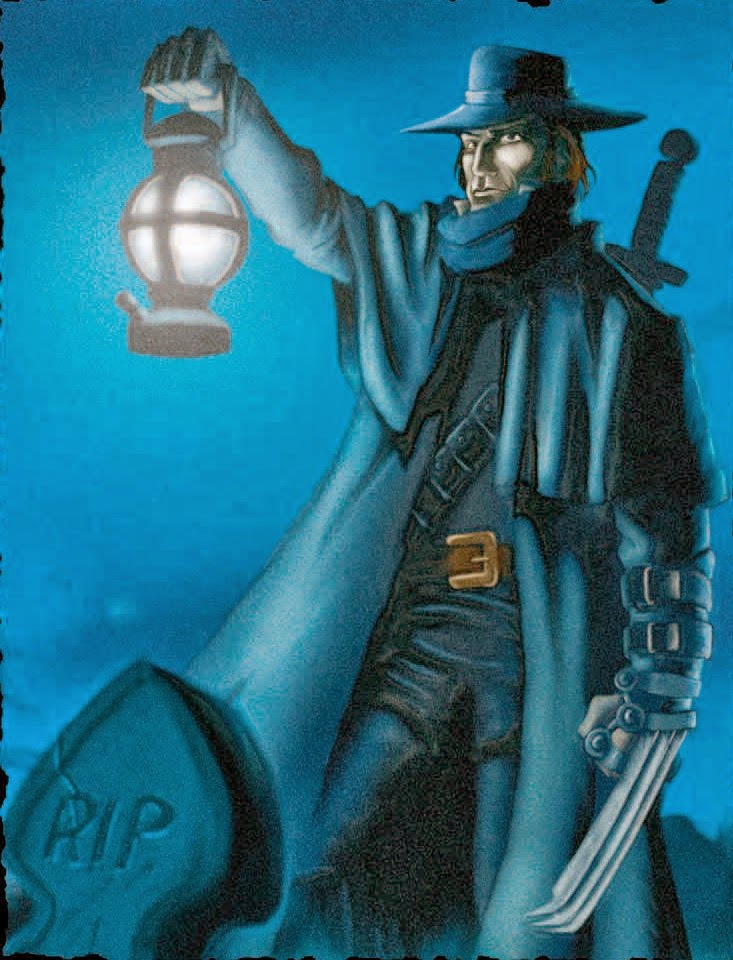 I've talked about Savage Worlds before (see sidebar for other posts) but it too fits into the low-preparation zone. The high points:

The simplicity comes in things like stats being measured in dice - no translation, no modifiers, no charts, just that you have a Strength of "d8" so when you need to use it you roll ... a d8. Genius!There are also edges and flaws to give players those unique things that make each character awesome, and there is a skill system as well, also rated in dice. It feels more detailed than Basic D&D, but is not as complex as Pathfinder, making for a nice middle ground.

Actual Play: Initiative is tracked via cards - higher cards go first, when your turn is over you turn in your card - no  need for tracking it round to round! Most opponents are either fine, shaken or out of the fight. There are not a ton of conditions to track and there are no real hit points to worry about either. Beginning with an approach like this makes it very easy to run in real time and not have to research complex abilities in advance. It also makes it easy to include extras like henchmen or guards that the players can run alongside their own characters. 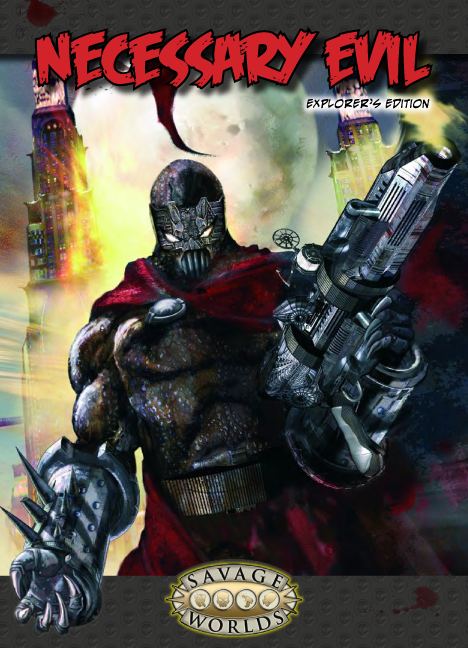 Settings: The real zero-prep genius here are settings like 50 Fathoms and Necessary Evil. These come with a unique setting in the traditional gaming sense of a world or city to play in, usually with some unique monsters, races, or situations. Then they also include a plot-point campaign which is a series of adventures/scenarios/encounters that form the backbone of more narrative style campaign leading to some ultimate goal. In between those though a DM can use the random adventure generator included in each, along with the stats, maps, and guidelines about how the campaign works to run a virtual sandbox campaign with a few key "triggers" laying around to keep things interesting. It's a complete campaign in one book!

Somewhat like Pathfinder Adventure Paths there are several of these out so it should be easy to find one that interests enough players to get that critical mass going. Westerns, Fantasy, Pirates, Supers, Modern War Stories, and Science Fiction all have representation here. 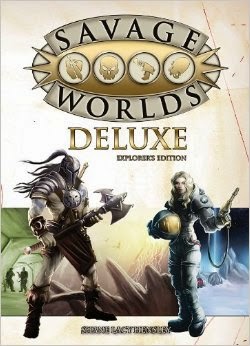 So what would I need to go no-prep here?

That's it, and you may not need all that much time! I was shocked at how much we accomplished in just a few hours when I first ran the game and familiarity only makes it that much faster and smoother.

Now you could certainly sit down and come up with your own detailed campaign setting for the game, and there are non-plot-point settings out for it. There are conversions of just about every other RPG setting and pop-culture media thing out for it too and with some additional prep you could run almost anything for it. I'm just looking at it as a zero-prep game and for that it's amazing. It's a game pretty much built around the zero-prep philosophy and it shows.
Posted by Blacksteel at 12:00 PM 1 comment: 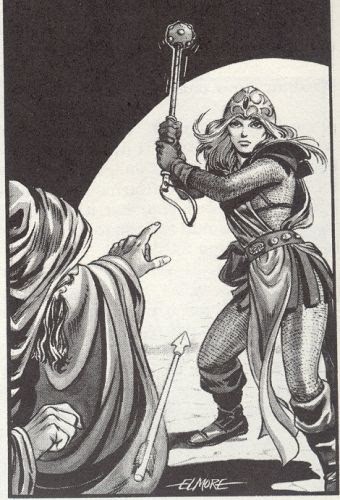 It may seem kind of obvious, but Basic/Expert D&D is pretty much a no-prep game. Maybe not if it's your first time to tun or play, but assuming you have some experience then it really boils down to this:


For me and most of my players at this point in our gaming lives this is all it takes. Now we don't play it all that often because it's almost too simple, but that simplicity is exactly what makes this kind of no-notice run possible.

Even character creation is simple enough to be done at the table. In a few minutes the party is ready to go. Simpler characters also make it easy to run more than one character, which makes it even easier to get to actually playing the game as you could run with as few as two players. 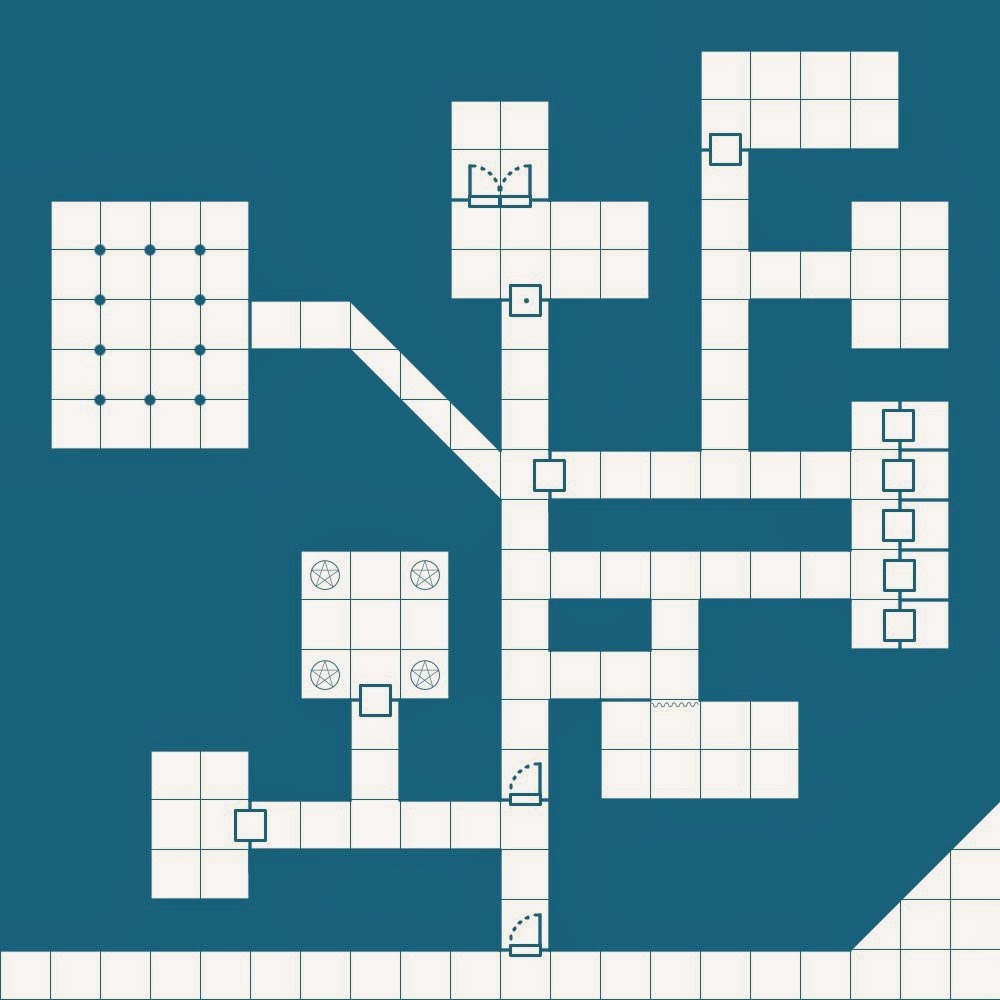 It's priced nicely too. If you don't have a copy of the rules, well:
...and there are a bunch of others out there too, some more fiddly than others.

If you need an adventure then D&D Classics has  a bunch of ...classics... for small prices and Dragonsfoot has a bunch of old-style but more recently created adventures for free.

Most of these kinds of adventures are not complicated so I wouldn't spend much time re-reading or re-working the module - just run it and enjoy! Most of them will take at least a few sessions to plow through so once you've started you are set for a while.

This is really the opposite end of the scale from my Pathfinder post. In that case technology and a certain approach let me run a complex game with very little preparation. In this case the game is simple enough and familiar enough that I don't need any technology to run it - just what's mentioned above and pencil/paper/dice. That's a great thing! No, it isn't a replacement for a game like Pathfinder for my players, but it's so easy to do that it makes for a fine game when you want one without a lot of rules or setting crunch and just want to get on with the adventure and play.
Posted by Blacksteel at 12:00 PM No comments: 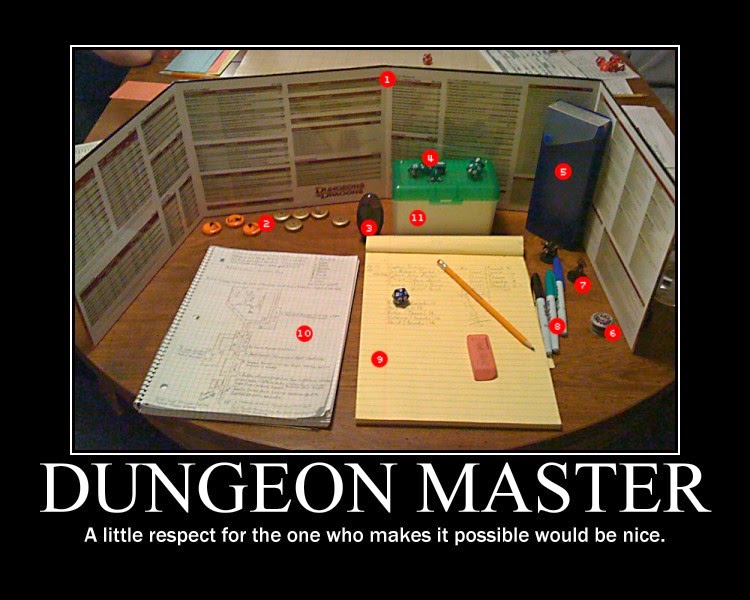 My Pathfinder post generated a couple of comments that surprised me so maybe I failed to communicate well in that one. I thought it was worth it to try again.

In my mind there are two kinds of prep for a game: campaign prep and session prep.

Campaign preparation is what I do before a campaign actually starts. Things like this:


Every campaign is going to require some of these if not all. Even if I know the system and the setting by heart and plan to run completely seat-of-your-pants I still have to get some people together.

With some games I may want to lump character creation in with this too - if the players know the game and the setting they can make characters ahead of time and Session #1 can jump right on into things.

Session preparation is what I do before each session, such as:
If I am running a published adventure I may include re-reading the relevant part of the adventure as part of this too.

So how does the zero-pathfinder thing play into this? From my previous post:


Right, because writing my own isn't zero-prep. Running an AP saves me a ton of effort in session prep and gives my players a shared experience with other Pathfinder players. This is really a campaign-prep level item as you're only going to do it once to begin with. Now granted, if you continue all the way through there are typically six volumes in a full Paizo adventure path so you would be doing this again but it's not per-session.

This is just an aid to running a session. There's no real work here -it's just opening a tab on your browser.

CM is also an aid to running the game during a session. You do it once, ever. You're good to go other than the occasional update. Again, there's no work here.

Upon further review, the DM doesn't need these - the players do. So cross this off the DM's list. They just need to send you a character file so you can use it in Combat Manager. You want to see their character in advance, right? They can drop the file into the same email that describes their character. No extra work for you.

So sure, you have some campaign prep before you launch the campaign - I don't see a way around that most of the time. In this case it's "get an adventure, read it, tell your players". But the session prep is almost nil - the adventure provides the situation, the maps, opposition, and the NPCs. CM lets me run all aspects of combat in a very crunchy game with no paperwork. The d20pfsrd site lets me check rules details quickly and efficiently as they arise.

The "overhead" of running a game - stats, bookkeeping, initiative tracking, condition tracking, all of that kind of stuff - just melts away. I do keep a notebook open to jot down who was present, the date, cool stuff that happens during the game, and just anything interesting I might want to know later, but I don't have to refer to it at all for mechanical stuff. 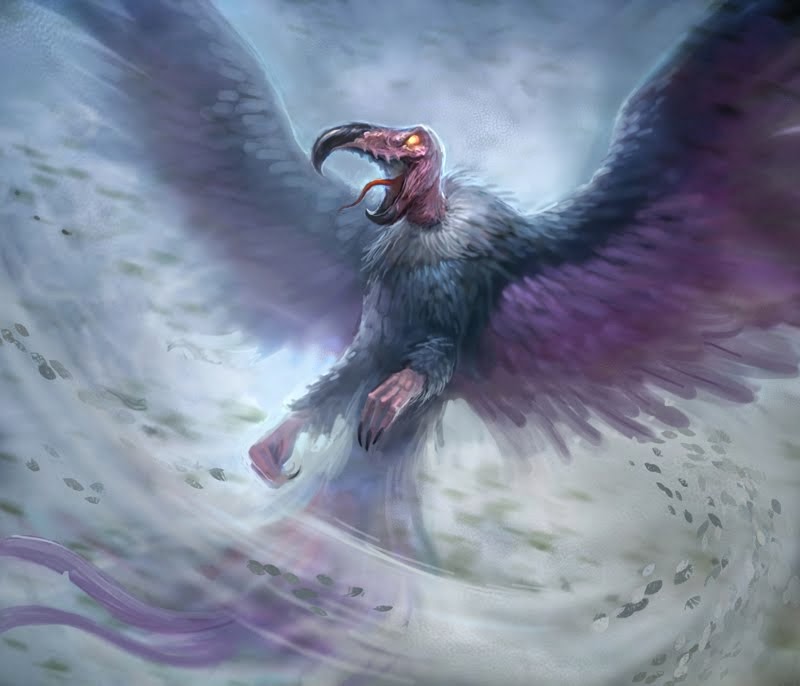 Heck, all of my monsters are getting individual initiative rolls in my Pathfinder campaign and I can't tell you how long it's been since that was a regular practice here. Sure the players always have individual initiative, but usually the monsters have been side or group initiative, at least since 3rd edition. Now, after 14 or so years of that, if 10 Fiendish Vultures swoop down on my heroes in the devastation of Kenabres, they're not acting as a huge block - I roll for all of them. Because I can.

I know not everyone likes published adventures, advantages or not. I've used quite a few over the years, the past 14 or so in particular, though many of them were converted to systems other than the original. I find them to be useful tools for almost any campaign.

I know not everyone wants gadgets at their table, though I have relented on this in the past two years myself as laptops and tablets and phones are pretty handy for some games. When I run Labyrinth Lord I don't need a combat tracker - the game is so simple that it doesn't add anything to the experience. When I run ICONS I use a tablet as I have most of my material for that game on PDF. ICONS also has a nifty character generator/creator which is certainly not essential - I just like the character sheets it puts out. For D&D 4E games a lot of my players use electronic character sheets because they make it easier to track power usage and conditions and I have no problem with it. It all depends on the game. If there was program like Combat Manager for Hero System, I would run a lot more Champions than I do.


If you are OK with published adventures and you are OK with using a PC at the table, then there is a lot of opportunity out there, especially with  a game like Pathfinder. Anything that lets me focus more on playing and less on getting stuff ready to play is a win in my eyes.
Posted by Blacksteel at 12:00 PM No comments:

Caverns of Thracia on DTRPG 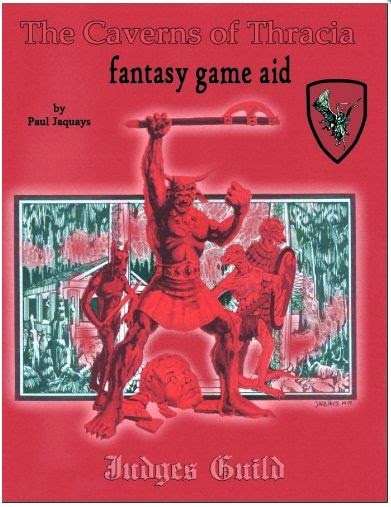 This one is fairly highly thought of in OSR circles so I thought I would pass along that's it's available on Drive-Thru RPG now for $6.50. Link is here. That's a pretty good price for a usable copy of the thing.

This is another one I'd love to explore with one group or another in any of 3 or 4 different rulesets. We just never seem to have the time. One of these days...
Posted by Blacksteel at 12:00 PM No comments: 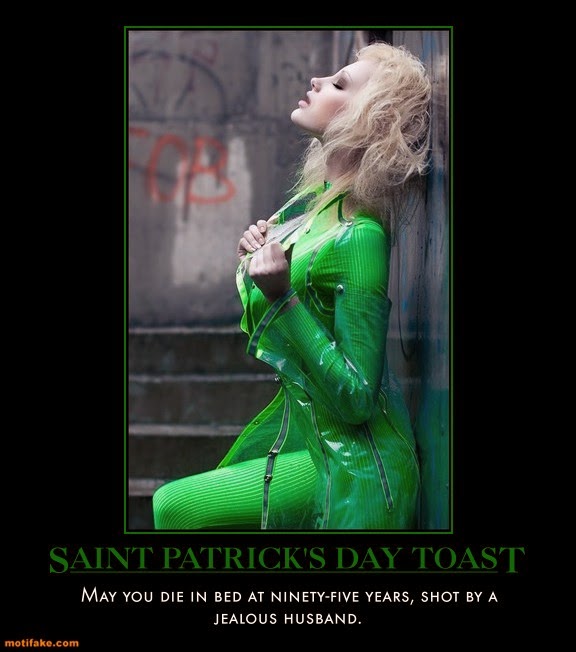 Posted by Blacksteel at 9:56 AM No comments: