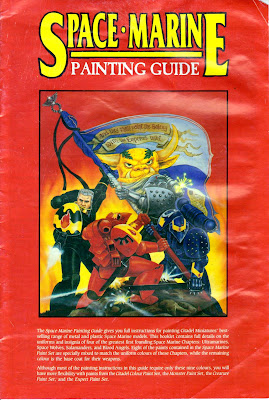 I came across this while organizing my 40K stuff. It's pretty old, I believe it's from the original Space Marine Paint Set from the late 80's. Anyway, let's explore: 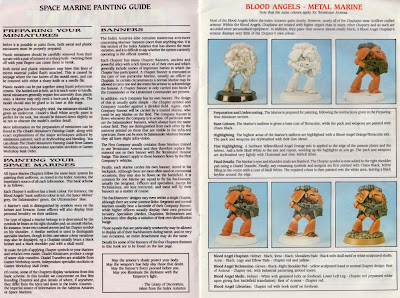 Introduction - where they mention a much more complete guide that you can purchase at your FLGS - and a Blood Angel. Look, white undercoating! Still a better choice than black when you plan to paint red or yellow  marines! 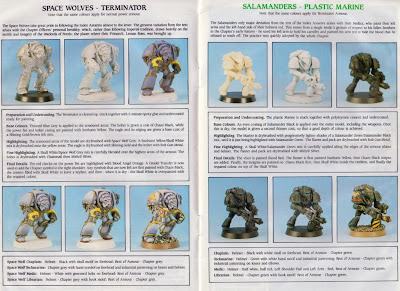 Space Wolves and ... Salamanders? You know when they showed up in the 3rd Edition Armageddon codex I really did not remember them from earlier versions but hey - here they are! This is a time where the Dark Angels were still black, so the sammies filled the slot of "green marines" I suppose. Still white undercoating here though I would use black for gray marines and maybe even for the green. 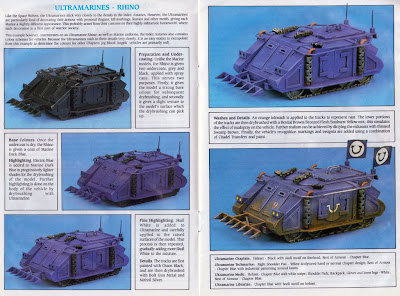 Look, an early example of weathering! We're still in the Rogue Trader days here and you saw a lot more of this kind of thing than you would when we hit 2nd edition, though it has come back around since. We see our first black undercoat here and it makes some sense for blue.

That's about half of this little book and probably enough to pore over for one post  - I will post the rest up later.
Posted by Blacksteel at 12:00 PM 1 comment: 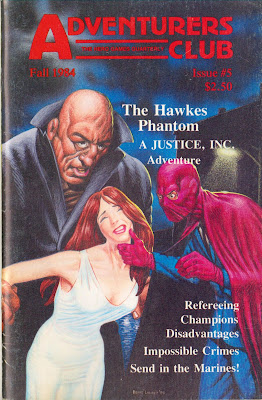 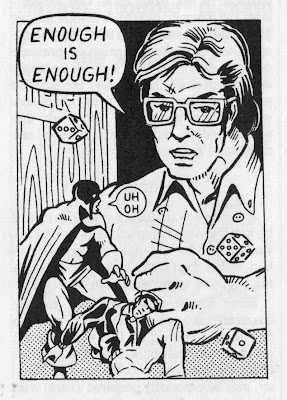 The first big article this time is "Refereeing Champions Disadvantages" and it's a very solid article, even today. One thing I've noticed in games that have been around awhile (from Champions to 40K) is that a lot of "how to" articles assume the reader knows The Basics and a whole lot of Generally Accepted Truths that guide one on how the game should be played. The problem is that outside of D&D and Pathfinder, not a lot of games spend time explaining this in an easily understood way (i.e. not a wall of text and not in a separate rulebook) so these things may not be as easy to pick up as they ought to be. This article covers the main disadvantages in Hero System in a great way from a DM's perspective. It spends a lot of time on killing attacks and codes and how to handle the interaction of those things in the game. It's a solid article and I think it's worth reading today. 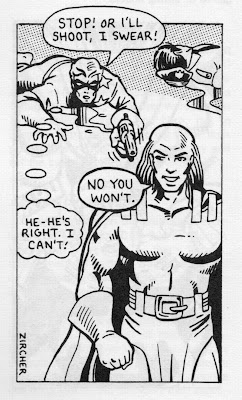 Next up is a short article on the military in Hero terms. This includes stats for soldiers, weapons, and vehicles like the Abrams and Bradley - and the Sgt. York air defense gun, which in the Champions universe might have been wildly successful but in the real world was not. It also covers the "Modern Jeep" which you may know as the Humvee. It's always fun to run across little things like this.

There's a short article on Impossible Crimes which is really aimed more at modern or espionage type games. This is not really my thing so I'll just mention it and move on.

Then we get to The Hawkes Phantom, the cover-mentioned adventure for Justice Inc. by Aaron Allston. For those of you wondering about that name (I know I was) Hawkes is a city and the Phantom is a masked criminal. As you might expect form Mr. Allston, it's a very complete adventure - a decently sized list of characters with notes on each, some good maps, a newspaper operation written up in some detail, and a villain's plot spelled out so that your players can discover and attempt to thwart it. There's even the potential for a train chase, which is not something you see in many adventures. I am not really a 20's-30's gangbusters type guy, but with some upscaling this could be turned into a Champions adventure pretty easily I think. Another plus: there are no aliens, or known supervillains, or mutated animals involved - just a good old cape-wearing human. 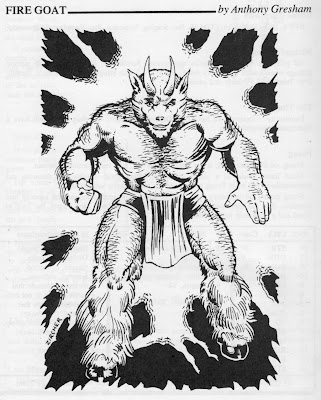 As you can see, the picture above is "Fire Goat" 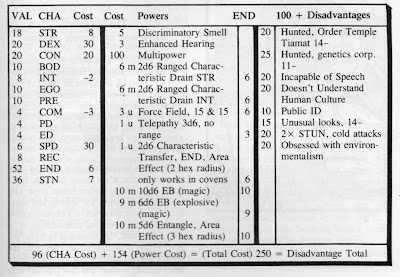 The flaming goat actually has an interesting backstory, sort of a cross between TMNT and Hellboy, before either of those two things were around. He's a genetics experiment that is the object of a devil-worshipping cult's magical ritual. The no talking thing could make for an interesting player challenge outside of the normal mechanics of the game. I have mixed feelings on it - in the right mood I can see trying to mimic a grunting goat superhero as being a lot of fun for the DM, in another mood it could be annoying and frustrating and get in the way of the rest of the game. His multipower is basically "magic spells" so he's pretty flexible. I see this character as the core of a nice little arc where the heroes encounter/find/rescue him, try to figure out what he is, and then help fend off the attacks of his hunteds and maybe help him find some peace. Mechanically he's not all that tough or powerful but he could be fun to run story-wise. Also, Incapable of Speech means you don't have to listen to his Obsession with Environmentalism.

Wrapping up we have reviews of The Armory (it did exist!) and Marvel Super Heroes (kinda funny to read now) some notes on infiltration in Espionage, then we get the somewhat-famous conversion guide for converting MSH characters to Champions.

Now this is very much a loose guide, though it does involve numbers, but there are few games as different in approach mechanically as MSH and Hero, so a lot of the Champions stuff is interpolated from MSH numbers. There are multiple disclaimers, and the author (George Mac Donald himself) notes that you're getting a picture of a character filtered thru Marvel Universe, MSH, and Champions -to me it makes a lot more sense to just sit down and work it out yourself but in the 80's a lot of us were very concerned with getting those numbers "correct", so if you could point to a system that you used to quantify the unquantifiable you were far more legit than someone who was just winging it. If you are contemplating doing this sort of thing it might be worth a look to see how this one worked, but I don't know if it's any less work than doing it yourself. Plus if you want a baseline there are many many writeups of Marvel characters in pretty much every Supers RPG system online now and these have the double virtues of a) having been reviewed by other obsessive fans and b) giving you someone else to blame if the character sucks or the mechanics are bad. I'd call that a win.

So there's issue 5, a solid, solid issue for Champions fans - then and now. 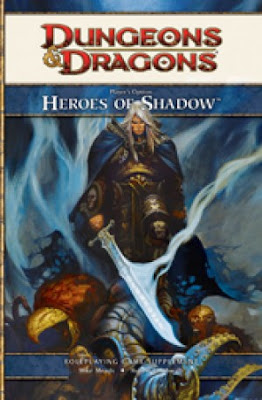 It's a shame that some of the best work in 4th edition came in its last year of life. The three books titled Players Option: Heroes of something something are good examples of taking the framework established in the Player's Handbook series and bending them to accommodate more diverse concepts and options. I didn't deal with them much in the previous campaign but some of their material has begun to show up in my current game and I thought I would take a look at each one. 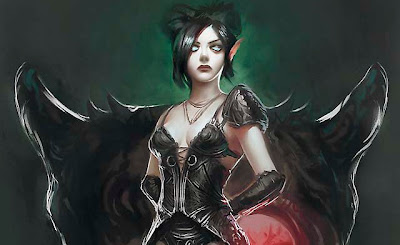 The Shadow book came out in April of 2011 and focuses on the darker side of the character spectrum:


The main complaint with some of these class options is the lack of choices at each level when it comes to powers. As I mentioned with the the vampire I think this kind of thing is overstated as I have only rarely seen two characters of the same class in one campaign, let alone the same build/pact/school/style, and even in that odd case you have race, theme, background, paragon path, and epic destiny to diversify. Compare this with AD&D fighters where they were pretty much the same other than weapon usage, which was largely determined by what magic items they had found in their adventuring careers - it's an order of magnitude of difference.

New races include:
Beyond this there are 10 Paragon Paths and 4 Epic Destinies plus some shadow-themed feats. There is also a lot of background material on how different races and classes might be drawn to the power of shadow and lots of ways to give PC's a hook into the themes of the book - darkness, death, undeath, and walking the line between good and evil. This is also a book where the attempts to bring back some of the old school D&D flavor , which  showed up in the Essentials players' books, flares right up too - Anti-Paladins and Assassins chief among them. However this does not constrain the book by any means, with Vampires and  Revenants broadening the definition of what a character can be.

Some perspective: When this book was released there was a fair amount of controversy, so I went back and read some reviews from that time. Some stuff was too powerful! Some stuff was too weak! Sometimes it was the same stuff! It was an Essentials book in disguise (4.5!) - remember when that mattered? What a difference a year can make.

Specific experience - Lady Blacksteel has been playing a Vampire in my current campaign and she has thoroughly enjoyed it. She likes the image and the concept and she likes the powers. She's not into the mechanics of the game as much as some so it's not like she's going to go research optimized builds online - this means the lack of power options doesn't bother her. She played a wizard in the previous campaign and at times the number of options available was a little overwhelming to the less fanatical player so this is actually a feature and not a bug to her. Don't get me wrong, she likes to play and likes to do well in the game, but she's not all that interested in all the out-of-game overhead like leveling up and tracking food and that kind of thing. To her the game is all about what's happening right now and not really about what paragon path she could take in six months, and the Vampire is interesting enough in play to work well for her. The original design notes can be viewed here - reading them after writing this just confirms what I had been thinking. 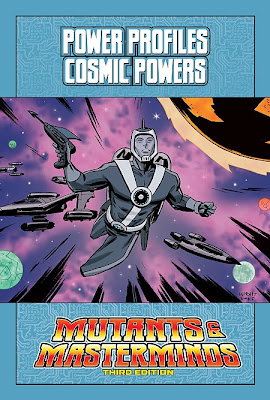 Looks like they're doing a special 10th anniversary edition of Mutants and Masterminds:

Kickstarter (of course) is here

Now I like M&M, I like Supers gaming, and there are some interesting stretch goals (though I am not impressed by the copy of 1st edition as one pledge bonus) and I thought I would share. Aside from this there a ton of RPG kickstarter projects out there - the news section of ENWorld on any given day seems to be filled with them - and I wanted anyone who cares to know that I'm not going to mention all of the ones I see or am even halfway interested in. I will only be mentioning the ones that are really relevant to the things I talk about on the blog - stuff like Stark City for Icons and this super-golden edition of M&M. I think the only downside to the 2012 kickstarter invasion of the RPG world is that everyone thinks they have a funding-worthy project, making it hard to keep up with the things that interest me amidst the avalanche of announcements.

Also - yes, the Power Profiles series (above) continues and is still quite handy, especially for newer players and some tricky concepts.
Posted by Blacksteel at 11:18 AM No comments: 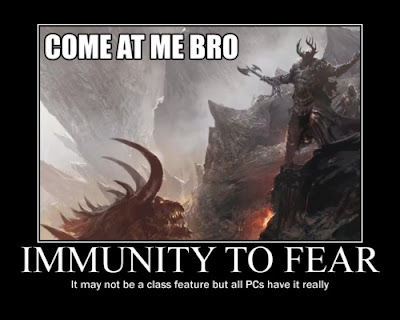