Even if you don't play the miniatures game the 40K universe is rich and nearly post-apocalyptic in tone and interesting enough to explore in other ways. One of the easiest ways to dig in is through the line of novels and short stories that have been published, mainly over the last 10 years. 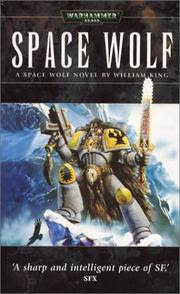 My favorites are the Space Wolf series by William King. His background was in fantasy where among other things he wrote the Gotrek and Felix novels for Warhammer fantasy which are my favorite books for that universe as well. His work at times feels akin to Robert E. Howard's stories, while retaining some of that English tone I can only point to but not adequately describe, similar to what you find in Moorcock's work. Considering the Space Wolves are basically super-powered space vikings, his talents mesh well with the subject matter. A young space wolf named Ragnar is the main character and he grows considerably though the books while having several interesting adventures including duty on Earth in the 41st Millennium, something we don't see much in other 40K stories.

There are novels about many other Space Marine chapters. Another good series is the Ultramarines by Graham McNeil. 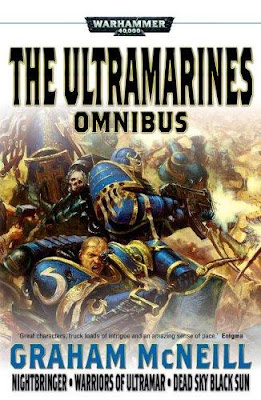 I just recently read this opening trilogy and it covers a lot of ground in three books.


There are more in the series but I haven't read them yet. 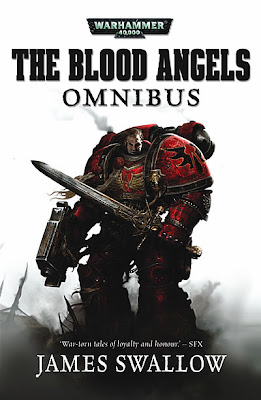 We also have a series of novels about the Blood Angels. I reviewed the first one and hated it, and it was pretty poor. I forced myself to read the second one recently and it's actually a big improvement and brings the story to a decent conclusion. It should have been released in one book, which is what this "omnibus" edition pictured above is. Taken as one complete story it's actually worth a read.

Additionally the focus of each is different: the Space Wolf novels are mainly about the main character - we see his journey from normal human to marine which we do not see in any of the others - with a pretty good secondary focus on the space wolf chapter and it's unique take on things. The Ultras are less chapter-specific and the central character is less of an individual but the 50K universe itself is a bigger focus. The Blood Angels are also have a less-interesting central character but spend a lot of time on the chapter, which is really the main character of the books as it undergoes an internal struggle to decide what it wants to be.

Scope is also quite different among the three. The Blood Angel books largely take place on two worlds and a large starship. Each Ultramarine book spends pretty much the entire novel on one world, giving an intimate look at each one as the characters journey through it. The Space Wolf novels spend more time on the chapter homeworld of Fenris than anywhere else but jump around to different planets and situations as each story develops. Aside from the marines there is a large line of novels about the Imperial Guard, so if you want to see how normal humans fare in the 40K universe, they are the place to go. The most popular of these are the Gaunt's Ghosts novels by Dan Abnett. I've read the first 3 and they are quite good too. The shortest synopsis I can think of is that it's a lot like the recent Battlestar Galactica series - things start off bad and keep getting worse. 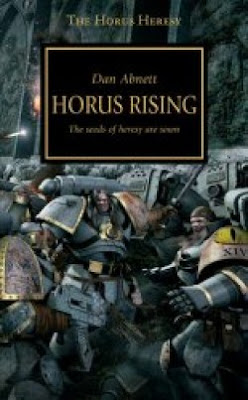 Aside from these character and unit-specific stories there is also a line of "historical" 40K novels that take place 10,000 years before the "present" of the game where the big event that sets up the current state of the universe happens - the Horus Heresy. It's a long story of conquest, betrayal, and the war that erupts as a result. It's up to 15+ novels now and I've only begun reading the first one now. This event has been around in-game for about 20 years but has always been summarized as "this happens and this happens and this happens and now the emperor is crippled and some marines are traitors fighting against the imperium." This novel series is a detailed look at a massive event and the units and personalities that are involved in it. It covers some interesting ground explaining why some units hate other units and how some of the nearly-immortal primarchs are killed. I'm looking forward to reading through it.

So if someone was interested in the 40K universe but had no experience where should they begin? I'm going to go with the Space Wolf trilogy or the Ultramarine trilogy as a good starting point. Space Marines lead lives of action and danger so most of the books dive right into that and sort the rest out later.

Most bookstores both used and new have a whole section of 40K novels so they are quite easily available and almost all of them are in print. There are audio books for some of them as well though I have no experience with those. If you're the least bit curious about Warhammer 40,000 go ahead and drop a few bucks on one of the books and see what it's all about.
Posted by Blacksteel at 2:59 PM No comments: This week there's a lot of interesting news with the open playtest starting up in about a week:

The Playtest Package details are here:

So I am interested. This is supposed to come out on the 24th. I won't be able to Assemble the Apprentices to try it out until the following weekend but it will make for a fun first summer weekend. Plus I might be able to talk the regular crew into giving it a try. I'm not giving up my 4E campaign for it, but I do intend to give it a try.
Posted by Blacksteel at 10:18 PM 3 comments: Multiple overlapping project launches at work is not conducive to regular blog-posting. Add in various apprentice commitments topped off with Apprentice Twilight's decision to do a six week school project in one night* - the LAST night - as well as a project for another class that was also due and it's been a very busy couple of days with a lot less sleep than normal. Thanks to Lady Blacksteel for keeping me sane the last few days. I should be back on a normal schedule tomorrow, with overreactions and some updates on the current D&D campaign.

*thanks again baby for that decision, not that you'll be on the internet anytime soon to see this message...
Posted by Blacksteel at 11:07 PM No comments:

Last week was present, this week is future... 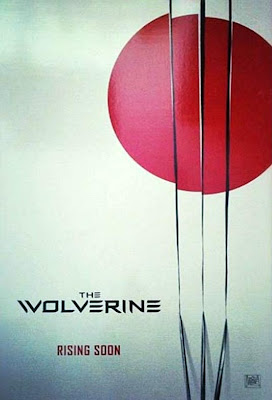 ...and I hope it's at least in the same league.
Posted by Blacksteel at 5:29 PM No comments: