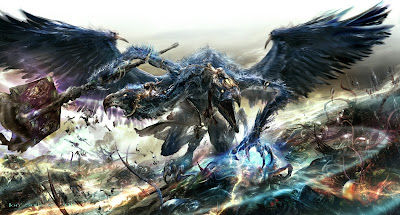 In addition to the chaos marine deluge I mentioned last time I also decided to start building up my chaos daemons. I'm not just looking at them as summoned reinforcements for the marines - I decided to make them a full army as well.

The first rush was Khorne - a trio of Bloodthirsters, an outrider detachment of flesh hounds, and a battalion of Bloodletters + Skulltaker + Heralds + Bloodcrushers.

I also was looking to expand my Slaanesh force beyond Keeper + Daemonettes + Seekers but that's proving tougher to do. Mainly because I got sidetracked by Tzeentch options and ended up expanding my horrors and screamers first. I actually had more Tzeentch stuff than Slaanesh, so I picked up a metal Fateweaver and made it into a real force.

Nurgle is still an aftethought. I have a unit of plaguebearers and a beast and an old Great Unclean One that I am using as a daemon prince but that's about it.

Expansion-wise my biggest obstacle is that I have a bunch of old metal stuff and it's way more expensive to build out those 14 metal daemonettes to say 20 or 25 than it is to just buy 10 of the plastic ones. I finished out my metal bloodletter units and my metal horrors but it does slow things down.

Force-wise I then decided I needed more shooting and some heavier units in general. Lesser daemons and heralds just aren't taken as enough of a threat - I needed something besides the greater daemons. So, I added three Soul Grinders. Right now I think one of them will be for the Tzeentch force and two will go into the Khorne army. That puts the red-colored army up over 3000 points and the blue/pink army up over 2000 so that's a pretty solid start. Next project is to finish out Slaanesh acquisitions and then decide if I want to make Nurgle an equal partner in all of this.

Actual-play-wise I have not yet used them in a fight but I hope to rectify that this weekend.

Stay vigilant, Guardsman!
What should you do if you are shot? While the superiority of Imperial tactics ensures that battlefield injuries are rare, you may, through carelessness, find yourself shot on the battlefield. In this case, it is absolutely imperative that you do not waste your medic’s valuable time or distract your fellow guardsmen with exhortations of fear or panic. 99% of battlefield injuries do not require immediate medical attention* – if you find yourself shot, consult the following flowchart to seek other courses of action before wasting the valuable time of your betters.

There you have it Guardsman – there’s no need to make a fuss. Following this procedure could save your life!**
* In 98% of cases this is due to immediate death.** Or, at the very least, some time.

Appropriated from here because I really liked it.
Posted by Blacksteel at 12:00 PM No comments: 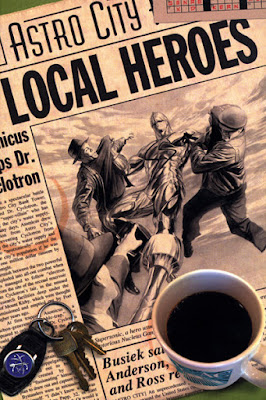 Last year I felt like I had let my superhero/comic book interests drop off too much so I resolved to dig back in this year. I've never been a guy with a bunch of subs at the local comic shop but I've made some effort to keep up with what was going on. The electronic age has made that much easier with the online option but I had let even that go. No longer!

One thing I wanted to do was read all of Astro City, from the beginning, in order. I've liked everything I've seen from the line so via the nice collected editions out there in the world I have been catching up. Slowly, but catching up. I like it enough that I want books in my hand, not pixels, and I've been very happy with this. If you haven't read them then I'd say take a look at the first volume, "Life in the Big City" and that will give you a pretty good idea of what it's about.

Second, I decided to dive into current DC with "Rebirth". I'm just getting started so I'll have more to say down the road but it seemed like a good place to jump onboard.

Finally with Marvel I've been looking at classic stuff - mainly Avengers and Iron Man - but my next round is the Dan Abnett Hercules book from a year or two back. I've heard good things about it and hopefully I can add to them in the near future. 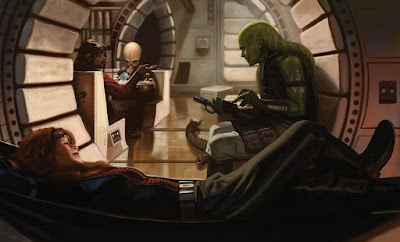 Around here RPG time has been somewhat difficult to come by but over the summer I have managed to run some 5th edition and some FFG Star Wars. I like the FFG game enough, though I am still thinking other systems might be better for certain types of Star Wars games I want to run. My players seem to like it so that counts for a lot. Deadlands and M&M have gone on hold for now.

The list of reasons is varied: high school football games, moving Apprentice Twilight off to college, con prep, medical issues for some players, Apprentice Blaster getting his first job,  hurricane impacts on player families - we've covered a lot of unusual ground this year alongside the usual stuff. Everyone is still interested, but getting 3-4 of us together has been a challenge.

In the meantime I've been filling in some things I missed in Pathfinder, 5th edition,  and M&M. The expectation is that I will get to use them at some point in a real game - hopefully sooner rather than later.

I have not finished reading Starfinder yet - I'll have at least one post on that when I am though.

I've picked up some boardgames as well and I may have something to say about those if I can get some playing time in with them.

Anyway the blog is a little slow but I will pick things up the rest of this month.
Posted by Blacksteel at 12:57 PM 2 comments: