The new Metamorphosis Alpha is out. 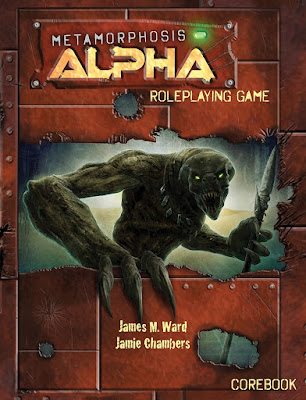 So there is a new edition of MA out this month - it's available here.

There is a free preview document here which sheds some light on the background and the system.

I was not a part of the kickstarter but I have read through the preview document and I have a few thoughts:


Bonus thought: From the book itself:
"✇✇ “The Petting Zoo of Death” is an introductory


adventure for Metamorphosis Alpha. It offers a great
starting point to get a group of diverse characters
together and shows how scenarios are presented in
the game.

Yeah - that's a terrible name for the intro adventure too.Whatever seriousness is conveyed in the intro and background material flies right out the window upon reading that, and this is coming from a guy who was perfectly happy fighting Gallus-Gallus-13's in Famine in Far-Go years ago.

Despite the stylistic knocks I am more than a little interested. A classic setting with a ton of potential combined with a simple yet mechanically interesting system ... yes, I will probably pick it up at some point. The only thing holding me back at the moment is the giant backlog of RPG material I am reading through and the ever-present "when am I going to get to run this" conundrum. I'll work through those and let you know how the full game looks a little bit down the road.
Posted by Blacksteel at 12:00 PM No comments: