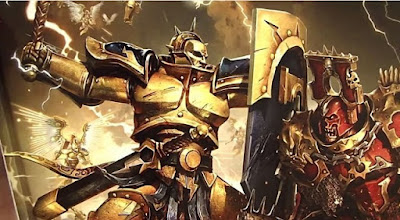 My approach in getting into Age of Sigmar at this point is to go back to the beginning and pick up things in the order they came out. This should help me in both the game rules and the lore. Rules-wise there have been various updates - allegiance books, battle tomes, campaign books, and general's handbooks - that add to the game and there have also been lore releases outside of those with various novels.

This is easier because Games Workshop has taken an approach to releasing the game by using an ongoing story that shows the progression of the setting in chunks. The initial boxed set and novella covered the history of what happened between the end of the Old World and the beginning of the new. It described the resettling of the various "realms" and the emergence of the new gods, starting with Sigmar himself. The history part wraps up with the invasion of this new world by the chaos powers and the retreat back to a single realm by the non-chaos forces. The "now" part of the game kicks off with Sigmar's return to the realms, the first invasion with his new Stormcast forces to re-open a single realmgate and begin a war to reclaim the realms for order and life. The boxed set contains six scenarios - "battleplans" - that describe this initial campaign. By the end of them, Sigmar's forces have reclaimed this first gate and are ready for more.

The original hardback continues this with additional battleplans and text that cover the expansion of this campaign beyond that first invasion. Then there are a series of "Realmgate Wars" campaign books and novels that describe the liberation of the other realms and the battles across them. That's pretty much the story of the first year or two of the Age of Sigmar game. The second big arc is just getting started now with the "Malign Portents" campaign and series of releases that seems to focus on the Death faction but is also bringing out a bunch of the Elf lore too.  It should be an interesting year. I expect that AoS will get more attention this year now that the initial blast of 40K new edition support is out and done. We will see. 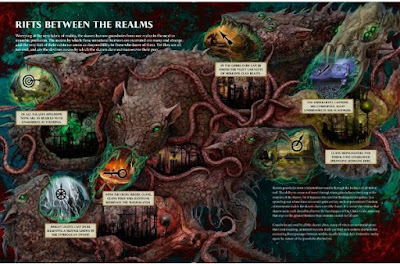 I admit that I have really come around on the lore for the game. Early on it was dismissed as "bubbles" of stuff that the various races lived in and it all sounded pretty shallow. Reading through the actual material though - well, it reads more like Runequest! It's a time of myth with gods and divine agents shaping the land and creating new races who sometimes do not get along. Time is vague (and flexible), geography is vague (and flexible), and heroes sometimes have multiple lives to live.

There are some elements of Planescape for D&D as well, and some from Stargate too. The 8 realms each seem to be associated with one of the old 8 winds of magic themes - heavens, metal, fire, life, death, beasts, light, and shadows. If you ever played an Empire wizard in the Warhammer RPG or miniatures game these should sound familiar. They each have inhabitants that fit that theme, while the powers of Chaos threaten all as they invade from outside of this reality.  They are not described as "planets" and there are not all-encompassing maps of the the whole realms, just certain regions where the fighting is taking place - they're more like "planes". To travel between these realms most beings need to use realmgates which are physical structures that connect one realm to another. Magic rituals can seal or open them so much of the wargame focus is on locating, controlling, and either opening or closing one of the gates.

Now I like this for the miniatures game as it's definitely ramping up of the setting to a mythic high-magic that fits the figures well. I also like it because there are some new RPG's coming out later this year too:


The best description of the difference between on those last two is this quote:

WFRP 4e is meant to be the “Look, a Bloodthirster! Run!” game, while Age of Sigmar is meant to be the “Look, a Bloodthirster! Charge!” game. Different power levels, different gonzo levels. C7 said that while they and other writers on WFRP4 are big fans of the classic Old World, they’re actually really looking forward to Age of Sigmar as a chance to do something that feels very different within the Warhammer mythos. C7 said they have hopes to develop Age of Sigmar’s setting into something very special, and those who were originally turned off by Age of Sigmar should give the RPG take on it a second look.

Like I said above, I see a lot of RPG potential in there for some adventures outside the typical D&D approach, but they will still be taking care of the classic Warhammer fans too. Well done! 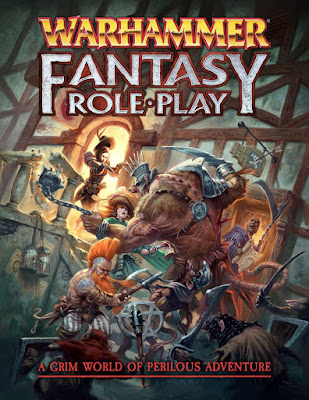 Originally I was thinking I just wanted a set of fantasy rules that was current and supported and the fact that they look a lot like 40K 8th was just a bonus. After reading the fluff though, I am buying into the game and setting as a whole, not just as a set of rules.

So far, for AoS I have the starter set, the original hardback book, the four grand alliance books, and the first general's handbook. The GH is out of order but I wanted some point values to get started. I expect we will be working our way through these early battles for a while and I am still building the starter set miniatures, but I am betting I can be caught up to the game's "now" before the end of 2018.  Updates to follow.
Posted by Blacksteel at 12:00 PM No comments: