Return to the Ruins of Adventure - Session 23: Price of Entry 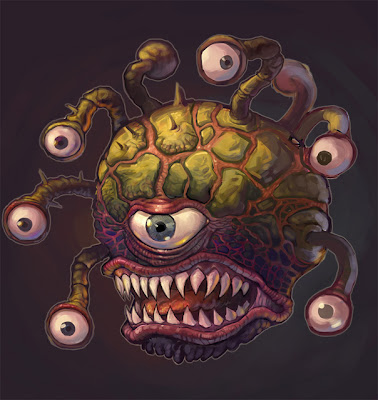 As the party regroups on the shoreline the beholder charges down the pyramid and across the water, eye beams blazing. Uthal and Kordan stand ready to meet the monstrosity while Althea, Mikal, and Jovanni respons with various blasts and beams of their own in a scintillating exchange of fire. Soon enough sword and shield and spear meet snapping maw while flame, frost, and force shoot back and forth along the shore. Cutting words, a hellish rebuke, a fire shroud, rays of enfeeblement, vicious mockery, and force beams are all a part of this short and violent fray. In the end an eldritch blast from the warlock sizzles thorugh a weakened plate in the creatures outer shell and fries its innards, ending the fight as it crashes to the ground, eyes finally closed for good. The heroes are somewhat battered but they stand victorious over the foe. As the sun sets they decide to camp for the night and attempt the pyramid again in the morning.


The next day the group begins investigating the pyramid and the lake. After walking up and down the seamless, featureless sides of the structure and trying various actions on the purple crystal at the peak, they decide the answer must lie underwater. The area is heavily ocntaminated with a viscuous purple-black substance which makes vsibility and even swimming somewhat more difficult than usual but it does not seem to cause actual harm. After some experimentation they discover that there is an opening in the side of the pyramid under water. With the aid of a rope and the help of the party's best swimmers, the whole group is soon surfacing in a large, wet room inside the structure.


Emerging from the oily black water the adventurers see a huge square room, dimly lit from an unknown source, and half-full of water, confirming that the pyramid does indeed lean to one side. It quickly becomes evident that the black contamination emanates from another structure inside the room. It looks like a large metal box with various attached structures and projections and gives the impression that it is some kind of boat, though one no longer capable of staying afloat. It has been crushed and battered by some great force and the blakcness leaks from the back and side of the object, trickling into the water and out through the opening in the side.


While examing the room and the crushed, leaking, object the party realizes that some of the black oily substance is pooled up around the structure. When they approach, it _moves_ and attempts to engulf them. As they back off, another pool of blakcness rears up on the other side of the wreck and moves to engage as well - combat ensues. Jovanni is caught in a bad position and is partially engulfed by one of the things, causing him to unleash his most potent magics in a desperate attempt to get free or slay the thing. Kordan and Uthal discover that slicing and stabbing the blobs merely shears a part of them off, which continues to fight on its own! Things look bad for our heroes as a small horde of these lesser globs gather around, blocking any retreat! Fire, however, proves to be an effective weapon and the party has plenty of that in various shades of red, purple, and green. Rage also proves to be effective against the smaller things as Uthal goes berserk and slaughters several of them on his own as Kordan holds off the big ones. The heroes triumph in a flurry of flame and frenzy, breathing heavily as they look at the black slimy masses splattered across the floor of the room, which is slowly sliding downslope into the water.


After the fight the party takes a breather and notices there are two openings on one side of the room. They decide to investigate and find a shaft leading up into darkness...
Posted by Blacksteel at 11:18 PM 4 comments:

Return to the Ruins of Adventure - Session 22: Into the WIld 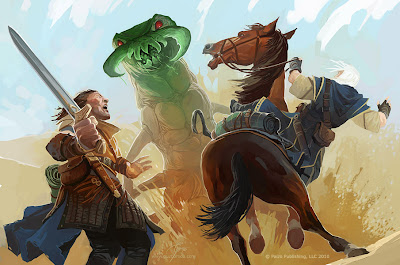 As dawn breaks over the ruined city of Phlan our heroes pass through the Main Gate, once again returning home after an expedition into the ruins. They have ended the threat of the Ogre King but in doing so they have learned of the thing he feared, that it still exists, and that it now falls on them to defeat it as well. They have also been reminded of the enemies made in previous adventures - enemies that actively seek revenge against them, as evidenced by the ambush outside the gate last night. For now the question is which one is the more urgent threat - the Fire Knives or the Pool of Shadow?

The Council of Phlan and the Temple of Torm welcome them back with high praise for their deeds and the agreed upon rewards. The Tormites are especially thrilled to know that the designs of the Temple of Bane have been thwarted, as the rebuilt edifice across the river has been growing in power. After reporting in the team splits up to rest, research the pool and their enemies, and craft some magical items that might aid them in their journeys.

Barnabus calls the party to his chambers and relates what he knows of the caves of steel, the silver pyramid, and the Pool of Twilight, which is not much more than legend. He also mentions the ongoing trouble with the lizardmen in the swamp outside of the city and reaffirms the council's offer of land and titles if the party will pacify the lizardfolk and reclaim the keep that once guarded the outer approaches. After the discussion our heroes retire to consider their options. There is some debate but in the end the threat of the Poolof Twilight is too great to ignore. One more good night of sleep and the heroes of New Phlan will seek it out and face it down.

Leaving the city via boat the group lands and heads up the Stojanow River. The pyramid is known to have appeared and disappeared at various times throughout the city's history but when it is present it is always located several days travel upriver.  As they proceed they notice the river has an oily sheen on the surface. Later it begins to take on a foul odor, and fish kills become quite common. Presuming that the pyramid is the source of this pollution, the team's pace quickens.

Watching the river more than the bank they are travelling on the party is nearly surprised when several huge insects burst from the ground and attack! A multitude of smaller insects, possibly younger forms of the larger types, also join the fight, swarming in on the group. Uthal, eager to try out his prize from the earlier expedition, speaks a word and a mighty obsidian steed appears beside him. Mounting up, the mighty goliath hefts his spear and charges into the fray as Kordan attempts to hold the line while Althea and Mikal unload various blasts of energy into the creatures. Jovanni's music proves quite handy here as he manages to distract and confuse some of the creatures, creating openings for Uthal and Kordan as they chop and slash through the melee. With some hard fighting, the heroes win out over the ankhegs with only minor injuries to themselves. Backtracking, they discover entrance tunnels into the beasts lairs though they find little of value therin. They make camp for the night nearby, which passes uneventfully.

Trekking onward the party sees a distant gleam , something reflecting the morning sun. By midday they come to a widening in the river and within this area sits a large silver pyramid easily 100' on each side. It rises directly out of the water and appears to be slightly ... tilted. The sides are a smooth silvery metal with no visible seams or openings. The very top of the pyramid appears to be some kind of purple crystal, which glows with a flickering light. The foulness in the water seems to emanate from one side of the pyramid as the contamination is much stronger there. The party stands on the shore and debates their next move, even entering the water (somewhat cautiously) as they consider how best to approach the structure. That's when they notice the ripples in the water moving rapidly towarss the shore.

Stepping back and assuming the semblance of a battle formation the party prepares to engage whatever emerges from the river. Their preparation is rewarded when three large lobster-like creatures explode out of the water! Kordan stands ready and lays into the first with his shimmering sunblade while Althea drops a flaming sphere onto the second. Uthal once again mounts up and charges in while Mikal blasts form a distance and the bard tries to help his friends while keeping a prudent distance from the river monsters.

After a short time Mikal is caught out of position by the third river monster and takes a beating. Kordan holds off the second while Uthal seizes an opportunity and slays the first with his iron spear. The barbarian then turns and engages the creature abusing Mikal and slays that one in short order as well. The rest of the party finishes off the last of the beasts and pauses to catch their breath.

That's when the purple crystal at the top of the pyramid flickers and a beholder pops into existence above it, instantly locating the companions, looking down on them with a contemptuous sneer.
Posted by Blacksteel at 11:36 PM 4 comments: 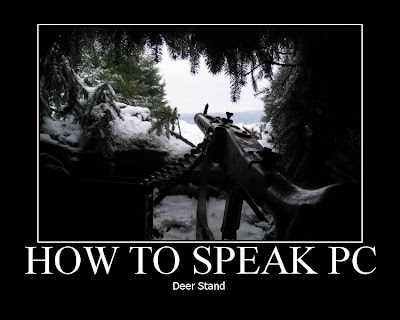 Theme for the week 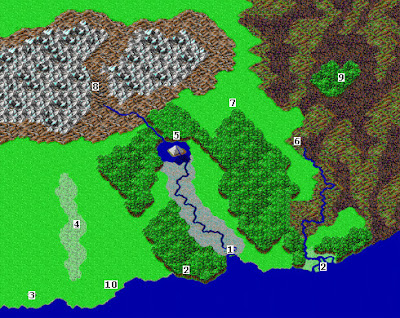 Since my regular D&D group is finally getting back on track this Friday we will be turning away from Supers for a week and catching up on the D&D campaign. I have neglected to post some session summaries from before the break so I'll be doing that - mainly to help my players and me get back into the flow and the mindset for the campaign.  My goal is to be completely caught up, so they will probably be somewhat abbreviated. So join me as we return to Phlan and the home stretch of the Heroic Tier which will hopefully end in a heroic victory over terrible evil, setting up the next phase of the campaign. Or it could all end in a horrifying TPK ending the campaign and causing us to play a completely different game - stay tuned to find out!
Posted by Blacksteel at 12:22 PM 3 comments: