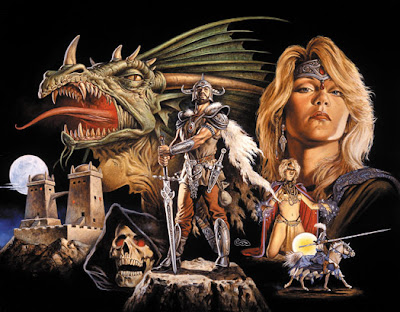 Look, there's more news about D&D Next so it must be time for Overreaction Friday! Let's get going:


"On the other hand, the Forgotten Realms setting
is a place where thousands of stories and adventures
can play out. True, the Realms has seen its share of
world-shaking events, and there are linchpin characters
the likes of Drizzt Do’Urden and Elminster,
but for whatever reason, none of that impinges on my
ability as a DM to conjure up new adventure ideas set
in the Realms. Furthermore, FR players rarely feel
as though their characters live in the shadows of legends.
The Realms always seems to make room for the
next great story, the next great hero, no matter how
many articles and novels and game supplements we
publish."
Mmm-hmmm. Good luck convincing the enraged FR fans after the mess that was "hey we jumped the timeline ahead 80 years and changed up the map and the races and threw in a worldwide disaster called the Spellplague". I'm OK with it personally - I think a clean break and a fresh start was a fine move - but I suspect my opinion is the minority. A lot of the comments on the article seem to support this. The good thing is that the Realms look to be the default setting for Next so it should get a lot of attention. Thank goodness, we might not have enough data on the Faerun just yet.

"It would be wrong to say that there is no inherent D&D style that carries across the nearly forty-year lifespan of the game. What you really end up with, in this approach, is a game that ends up looking—not coincidentally—like original D&D. Not entirely, of course, and not precisely, but close. It's a game that captures the feel of OD&D."

I'm a pretty big Monte Cook fan but who cares about this? I'm going to guess that 90% of current D&D players have never played OD&D and aren't interested in doing so. D&D has not been a simple game since at least 1999 (and many would pick a date prior to that) so going for that style of play doesn't seem like a great idea to me. When the majority of your current fans (and Pathfinder players) like a crunchy rules system, wouldn't you target them first? I suppose if enouh of the "modules" for the modular approach are available at launch then this might still work, but upon reading this it seems like a radical change from the 3E/Patchfinder take on things, as much so as 4E was, just in a different direction. How much business are they thinking they will get from lapsed players from the 80's and the OSR? No one was pining for OD&D in the 80's or 90's - I'm not sure anyone really is now.

Again, I'll say I'm interested in how this grand unified theory of D&D turns out, but the goal of pleasing fans of every edition seems extremely difficult to me. It should be interesting. In the meantime I'll keep running and playing various editions and when the new one emerges maybe we will add it to the rotation.
Posted by Blacksteel at 12:00 PM No comments:

Savage Tides of Kalamar - Session 12: Frogs in the House

Since I'm having trrouble getting my session reports together this week, here's one from a few years ago

Our heroes begin in a sea cave in Kraken’s Cove discussing the situation with Harliss Javell, one of the few remaining survivors of a pirate band that was affected by some terrible disease. Having come to her aid, the party has gained her trust and she informs them that her first mate Dravoraz has gone to Sasserine. He is seeking revenge on the family of Vanthus Vanderboren for causing the trouble that nearly wiped them out. She quickly writes a note to Dravoraz that asks him to stop attacking the Vanderborens and rendezvous with her at another location. Harliss mentions she intends to commandeer the only unburned ship in the cove and try to contact other member of the Crimson Fleet. After farewells are exchanged, the party heads for their boat.

Dorian stops off to investigate an unexplored side passage and discovers a few items in what looks like the (now-dead) leader’s room, including a very nice hat.

The party returns to Sasserine hours later with Dorian and Tylock still suffering from their infected bites. The city is in the midst of a major celebration, the Wormfall Festival. The streets are jammed with revelers, complicating travel immensely. A brush with a drunken gnome was swiftly avoided, a runaway parade wagon was dispatched, and things were going well until a group of stilt-walking entertainers turned out to be thugs bent on harming the party for unknown reasons. A short bloody combat began in the streets that sent the crowd fleeing in all directions. The heroes came through in good shape and found that their fight had cleared the way to the Vanderboren estate.

Entering the grounds nothing seemed amiss so the party dispensed with any attempts at stealth. The group ran straight up to the front door, kicked it in, and confronted a trio of frog-like humanoids, clearly warriors, who were occupying the entryway. Battle ensued. Making short work of the creatues (later determined to be “Bullywugs”) the team spread out on the first two floors of the mansion. Lavinia’s office was found to be unoccupied but a trophy room had another threesome of the frog-men who seemed interested in a giant stuffed frog. Another pair were found in an upstairs laundry. There were few clues and little seeming activity in the house until half of the group ventured downstairs to the basement…

At the bottom of the stairs, Quillathe, Dorian, and Tylock saw a human woman wearing a sheet with silverware stuck through it being forced to dance and dodge while a strange-looking creature attempted to bite her. Farther back in the room were 3 more of the frog-men and a hulking frog-man wearing a crown who was clearly in charge. He noticed the intruders, raised his greatclub, shouted “Chunkus – get ‘em”, and a vicious fight erupted in the corner of the basement.

Dorian and Quillathe moved to engage while Tylock went for help. Quillathe went in first and distracted Chunkus long enough for the wounded human to escape through another door. Unfortunately she was the first to find out that Chunkus was a Rust Monster, the party’s first encounter with that type of beast, and he was soon happily munching away on the remains of her armor. She attempted to manuver around behind the hostiles while Dorian took them on from the front two-weapon style, dropping several of the frog king’s bodyguards, and he eventually changed over to paired wooden clubs to deal with the rust-beast.

The other half of the adventuring band soon joined the melee. Michella the wizard had some tough decisions to makeon how to intervene as she was the first one down the stairs. She quickly moved aside and let the heavy hitters step into the fray. Tylock and Katan moved in to help surround Chunkus and the king as Arianne took position at the foot of the stairs and Michella gave supporting missile fire. Chunkus was finally slain after dissolving Tylock’s and Quillathe’s armor. Quillathe was in trouble after losing her armor and was crushed by a mighty swing from the Bullywug King’s greatclub. Not long after, Arianne also met a gruesome fate as she was slammed into the wall by the massive weapon. The rest of the party, enraged, then rallied and slew the frog-man lord with series of brutal hits.

Pausing to survey the scene, the discovered that the human prisoner had committed suicide after locking herself in a closet. Apparently the sounds of carnage were too much for her after the ordeal she had suffered. Katan vaguely remembered seeing her before, possibly a memeber of the “A-team” that was also working for Lavinia.

The troop had defeated the Bullywug King but they had suffered a terrible cost. Quillathe was dead while Arianne and Tylock were both unconscious and bleeding out.
Posted by Blacksteel at 12:00 PM No comments:

... and it is Star Wars week here as we lead up to the super-awesome re-release of Episode I in 3D, so here's my entry for today... 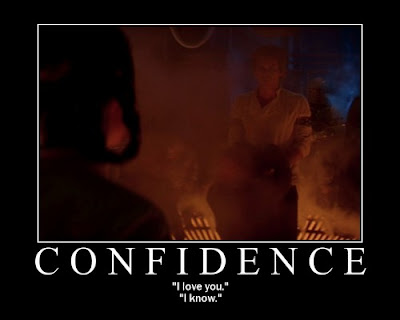 Posted by Blacksteel at 11:02 PM No comments:

Not a Bad Weekend 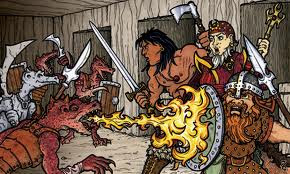 Saturday night was some birthday stuff followed by a bad decision on my part to introduce the apprentices to 3rd Edition. After 3 hours of working on characters they were finally ready and my tolerance was shot. I like Basic/Expert D&D for speed of play, and I like 4th Edition now for the richness of play, and I'm not sure I have much left for 3E, at least not when it comes to teaching character generation to 3 kids at once. Since we do have the characters I may give an actual adventure a whirl but sheesh, that was a beating.
The one good thing that came out of it was that I spent some time digging through my pile of Scarred Lands material and discovered my old notes and hexmaps and just all of those paper documents you accrue in a long campaign. It really brought back how much I put into that one and it also reminded me how much that world is worth the effort. It didn; make me want to break out 3E all that bad though.
So Sunday we played another session of the Temple of Elemental Evil 4E campaign. I'll have a write-up later but it went well. They're close to finishing up the Moathouse now so soon we'll be able to move on to Nulb and then finally the Temple itself.
Then I watched the Super Bowl - not a bad weekend. More on the specifics of some of this stuff later in the week.
Posted by Blacksteel at 12:00 PM 2 comments: 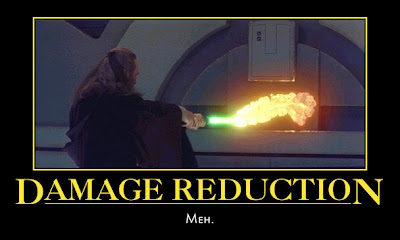