RPGaDay - Day 1 - Forthcoming Game You're Most Looking Forward To 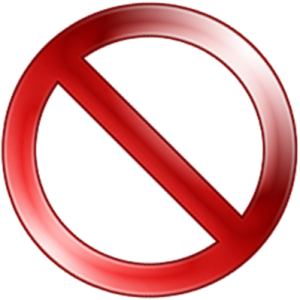 ...and right up front I hit a bit of a wall. I started thinking and I don't really know of any new full games on the way that I am jonesd for.

So the easy target of a new edition of something I already like aren't even there. Even the next 18 months of Pathfinder AP's is not really striking home with me. Modiphius has some interesting licenses but their system does not appeal to me

The kickstarters I've backed have pretty much all wrapped up.

There's a Halo miniatures game in the works - that might be interesting.

Everquest III ? I mean I'm a little interested in that.

One of the City of Heroes successor projects?

I had not really thought about it but there really isn't much I'm waiting for this year.

Final answer, for tabletop RPGs, is Freedom City 3rd Edition, which is technically a supplement for a game rather than a new game itself but it's the best I've got right now. 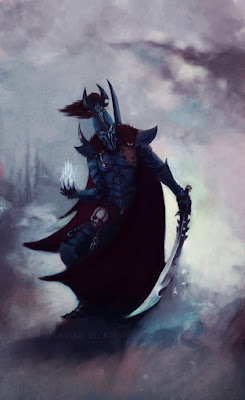 We haven't been playing much 40K lately but work has continued:


The most recent development has been the acquisition of a small Dark Eldar force. The thinking was as follows:
Now we are not the first to discover this nifty combo but after playing around with various Deathwing and marine drop-pod armies I can say that safe deep-striking is a really really nice thing to have. With marines it's typically done with melta weapons or heavy flamers. Being able to do it with D-weapons is really nasty. It will only work with the one squad but it's a truly vicious squad. With a huskblade and a shadowfield he also gives the undead eldar some close combat punch that makes charging them a much less attractive proposition.

Now to enable this the minimum Dark Eldar force is an ally detachment, so 1 HQ and 1 troop unit.

Digging out my old never-built 3rd edition Dark Eldar warriors I put together a squad and eBay provided a reasonably priced Raider for them to ride in. This gives me a nice mobile unit that is not terribly expensive and dishes out some decent poisoned weapon fire which is something the normal Eldar army does not feature. With splinter racks on the raider, they will be scoring a lot of hits up close. Of course, with armor 10 on the raider they'd better take those shots while they can. They will most likely be starting in reserve.

Now granted, I could make this a lot cheaper. 5 Kabalite Warriors is 40 points, so I could strip this down to a 205 point boost, even less if I went with a less-geared-up Archon, but in a larger game of 1500+ points I like the capabilities this force brings to a typical Craftworld Eldar army.

For the future, I admit I like the Dark Eldar look, probably enough to expand them beyond "minimal ally force". If I can scrape together the rest of my old Warriors from the 3rd edition box that would give me a second squad (or two minimum squads) and at that point they have the core of a full army. From an ally standpoint, Fire Dragons on a Venom seem to be a popular option as do minimum warriors or Trueborn on Venoms for objective seizing, so a Venom or two seems like a good idea. A second Raider seems like an obvious choice, and a Ravager would add a Heavy Support option. Scourges and maybe some Incubi look like fun as well. There's not a lot of urgency here, just an interest and the potential to mix and match 3 different armies together in different ways.
Posted by Blacksteel at 12:00 PM No comments: 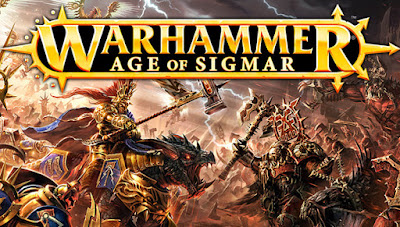 So Warhammer Fantasy Battle has been replaced by Warhammer Age of Sigmar in the last few weeks. This is a whole new system with a shiny new boxed set and a new core book that is only tangentially related to what has come before - more on that later.

So did we go buy the big new box? Oh no - In a stunning move, GW has released the rules for AoS on their website for free, along with (even more shocking) army lists for all of the current armies in the game! I was shocked, surprised, and very happy to see this as it's been a  long time since Games Workshop has taken this approach to any of their games, and they've never done it for one of their "main" games. Maybe someone there finally gets it!

Given the rules and army lists and given that we already have several fantasy armies floating around the house we decided to give the new game a try. Apprentice Red brought out his Wood Elves while I dusted off my Chaos Warriors. After re-skimming the rules again and choosing our actual units we got started.

This won't be a long report. 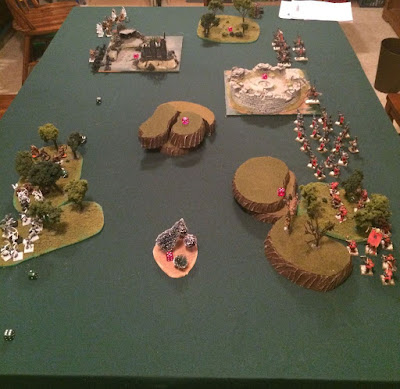 On the right I took a mounted chaos lord, a chaos sorcerer on foot, two units of chaos warriors, and a unit of chaos knights.

On the left Red took two units of glade guard, a unit of waywatchers, a unit of dryads, and a wizard.

The one mistake we made was using the special terrain rules as written. That meant that every piece of terrain on the table had some kind of extra effect (tracked via the red die in each one) - out to radius of 3"! We quickly dropped the radius effect and just applied the effect to units inside the terrain. Even that meant that two of Red's units and one of mine were paralyzed for half the game because of bad rolls. Also, with the terrain effect being random (and with some of them being random every time a unit touches them!) it's difficult to plan around them or use them in any way.  This is not a desirable situation and we will be altering it the next time we play. 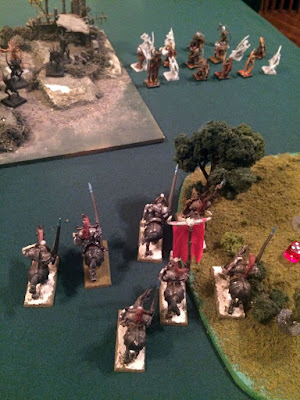 On my right the elf guards and the wizard moved up but were out of bow range on their turn. This would be very bad for them as it meant that on my turn (Red went first) they were within charge range of my chaos knights. 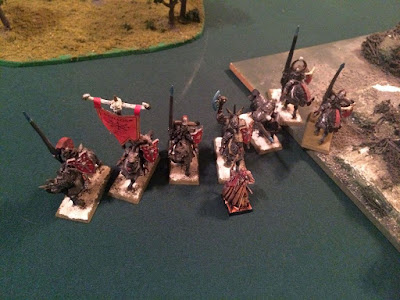 So ... yes - Chaos Knights work pretty much the same way they did in prior editions of Warhammer. 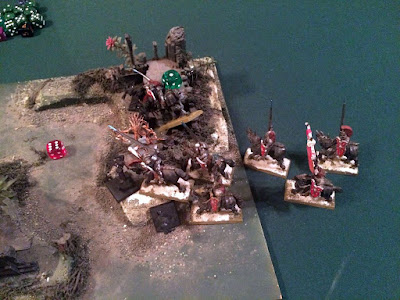 The knights and dryads locked up for two turns after this, mainly because they were too close for me to charge and backing off to set up another charge just does not seem like the chaos knight way of doing things. 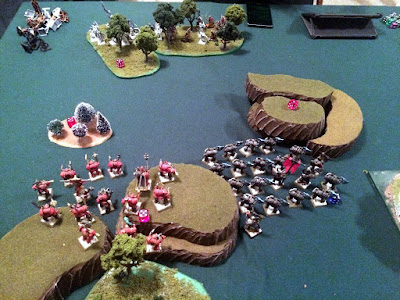 Over on my left the infantry advanced with some protection from the chaos wizard, but he could not stop the Khorne warriors (the red ones) from being ensorcelled by the !#@$@#$% hills for two turns. Fortunately the elves were having some similar problems and only got two turns of shooting off during my advance. It hurt because wood elves have some nifty shooting abilities but Chaos Warriors are  2-wound troopers so it didn't hurt as much as it could have. I lost 3-4 men out of each unit. 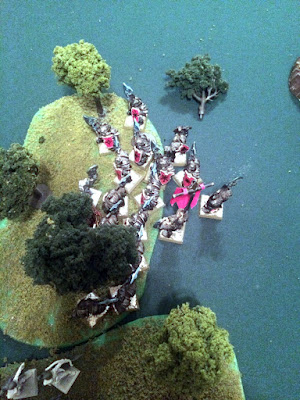 Once they close in of course, it's a pretty short fight. Chaos warriors also still work about like you would expect them to based on prior editions of Warhammer. 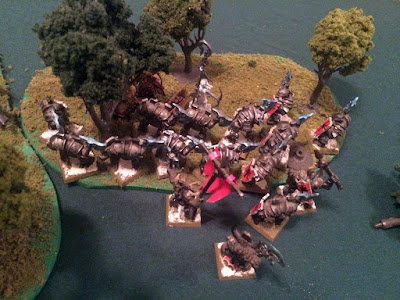 So, what do I think of the new game after one session?


Bad:
My biggest positive impression is that it's much easier to grab some sheets, set up some units, and start (and finish!) a game now that it used to be. That's a strong feature and in my experience it's the way a lot of games are going nowadays. Simpler & faster is beating out detailed, tactically rich, simulation type games. Presumably because most players are willing to make that choice. and prefer it. It works for me for now, and I have the older versions of Warhammer (and a bunch of other fantasy rules) to use if I want to get more crunchy again.

Short version: this is the DBA version of Warhammer and I predict it will spark a revolution and a new following much like DBA did years ago in the ancients world.

My biggest negative impression is that when you take away all the unit customization, character customization, magic items, and consistent terrain rules, you take away a lot of both the pre-game and in-game strategy and tactics and turn it into a card game where it's mainly my unit stats vs your unit stats. No more angling for a flank charge, no more setting up to use a one-off magic item, no more screening one unit with another, and no more chance for an otherwise intact unit to flee with a failed leadership roll  means that unit stats (and the die rolls) determine most of the outcome of the game. 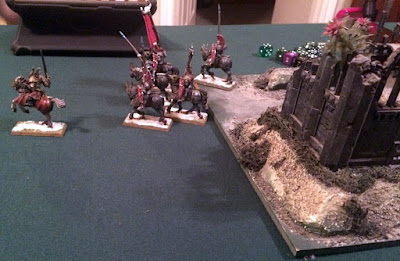 The Big Controversy:
The internet has been aflame with the lack of point values and how it ruins the game. I don't think it does. Again, card games work just fine without point values and that's kind of what it feels like. I think there may be some kind of structure needed for a formal tournament and we are already seeing limits on the number of wounds etc but I wonder if a simple limit on spamming things wouldn't solve the problem. Something like "no more than three of any single unit" should do it, combined with designating certain special types as "unique" so we don't get three "Galrauch the two-headed dragon of chaos" units showing up in one fight. I think that would be enough of a limit to keep the game interesting for everyone.
Posted by Blacksteel at 12:00 PM No comments: