Posts have been sparse here recently but games are still happening. I'm just choosing to prep and play them more than  write about them.

First, over the weekend I managed to run the second session of my 5th Edition "Greatest Hits" campaign. One prior player couldn't make it but Apprentice Blaster and Apprentice Red were both there so the assault on the Caves of Chaos continued. They've just about wiped out one of the orc lairs and there is an amazing amount of in-character strategy discussion so they're actually acting like Professional Treasure Hunters and it reminds me a lot of how my friends and I used to handle it.

I also continue to be happy with how the game handles ... well everything. It has a really strong element of playability, and it feels as if that was a conscious design choice rather than a happy accident. I saw some of this back when we were playing Next and it is even more evident in the final product. It fits really well with what I want as a DM right now.  Just as important, my players seem to be enjoying the different approach after 3-4 years of Pathfinder. I think we spent time looking up one rule the entire session, and that was only because it had come up a few times and we wanted to get consistent with it. That's a strong contrast to PF where we look up stuff every session, even after years of playing it. Pathfinder's detailed rules is a feature, not a bug, most of the time but I'm in a mood for a different approach right now and 5E is giving me that. 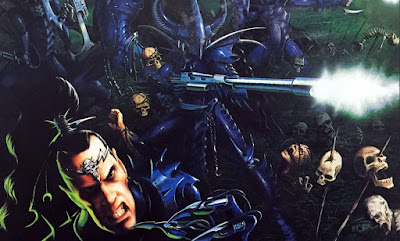 We also managed to get in more games of 8th edition 40K with the official release on Saturday. For me this mainly involved my first time to field the Dark Eldar as a full army. It also involved me getting blown off the table for the first time as a Dark Eldar commander. Different rules and a new army apparently means a big learning curve here. I'm not going to make a full report out of it, just some conclusions:


I like the army and I'm adding some options to what I have so expect more Dark Eldar batreps in the future.