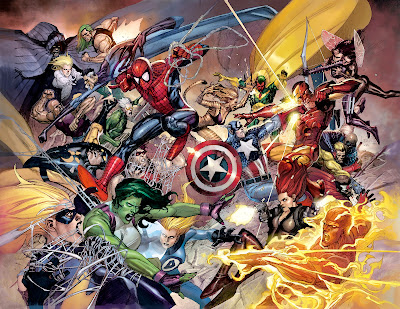 Since I put up a post about Annihilation a few weeks back and had some mixed feelings about it as an event and as a game book for MHRP I thought I would also post my thoughts on Civil War. The short version: It's a great event but a less great game resource. 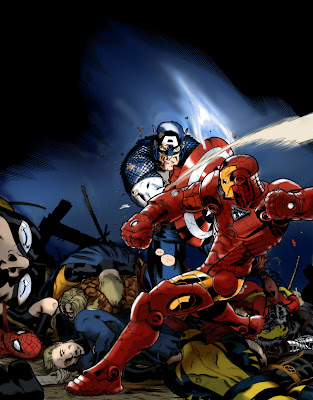 As a comic book event it's great, spanning 100+ issues and involving all of the major characters (except Hulk - I know) and most of the minors and the teams and organizations and a lot of the villains as well. We have a core plotline involving certain groups of heroes and side stories involving a lot of smaller groups or solo heroes. It's truly an epic event.

Additionally, and just as important, it revolves around an interesting question, one that goes beyond the traditional "good vs. evil" or "save the world" adventure stories that have made up the bulk of comic book stories. It's possible to see both sides of the question as "right" on some level, at least as far as why they think the way they do.

Finally, there are serious consequences to the outcome of the story. Depending on which side comes out ahead, things may continue almost as they have, or they may be altered in a huge way - not as with the simple "earth/mutants/magic are destroyed - or not" type of scenario but they are just changed in significant ways. The final effects of the conflict are a step above most comic stories and even some other events.

These are the things that elevate Civil War to a higher level. Which makes it great as a comic book epic but how does it fare as a Superhero RPG? 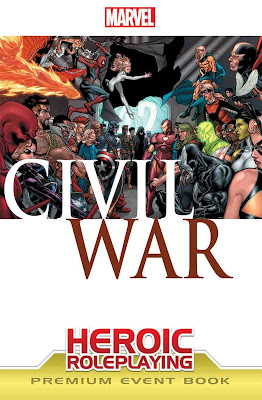 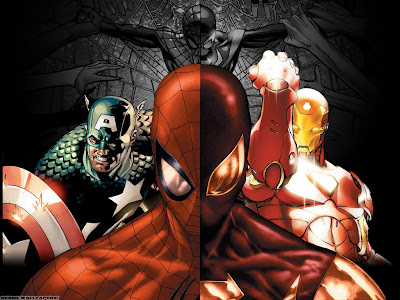 The Bad:
Overall I like Civil War as a game book, but not as the kick-off to a new campaign. All of the upheaval and loss and sacrifice will mean a lot more if your players have a chance to get to know things as they are, and then get to pass thru that time of change and come out on the other side. Let them build up some rivals and enemies and allies first, then make that scene where a friend chooses the other side a big one. Same thing when an enemy they've jailed before shows up with a badge for the first time - history gives us context and some meaning.  I suppose my ultimate take on it would be "go run your game for a year, THEN run this, for the ideal experience.". Given this I would have liked it better if this had been the third event book, rather than the first, but the answer here is to make your own. There are a fair number of homemade events on the net for inspiration and structure - take a look and get to work! Then run the Big Book.

That's about it for Civil War. The next big thing is supposed to be Age of Apocalypse and I will be all over that one when it arrives.
Posted by Blacksteel at 5:58 PM 3 comments: 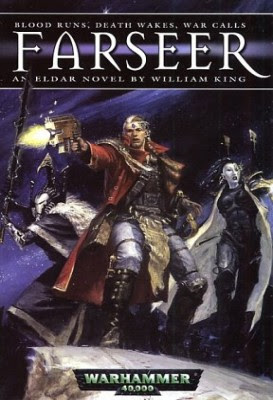 This is another 40K novel but it's one from about ten years ago that I somehow missed. I picked it up on our Austin road trip and I'm very happy I did. It's by Bill King, my favorite of the various Warhammer and 40K novel writers. He's written 6 Gotrek and Felix novels and 3 Space Wolf novels and none of them have sucked. A track record like that is hard to find in the realm of "genre fiction". Plus they're actually good - the characters are interesting, the settings and  situations are interesting, and there's some logic to the plot - that's about all I can ask for in a book like this.

This one is no exception but it is somewhat different from other 40K novels and even some of BK's other books.

First, the main character is a Rogue Trader, so right off we have a different take on things as so much of the 40K universe is seen through the eyes of conditioned and engineered space marines or terrified helpless grunts of the imperial guard - here we have a wealthy powerful otherwise normal human who is free to travel and largely do what he pleases without being part of a military organization or a secret conspiracy. As the book begins he is low on funds, in some disfavor and in some debt, and has some other developing problems as well. Much of this is due to a prior expedition that went badly. Part of the story is climbing up out of this hole.

Second another major character is a navigator. These are an interesting part of humanity that have not figured prominently in many of the 40K novels. The high point here is a chapter spent describing a flight through warpspace as perceived by the navigator - I liked it a lot.

Thirdly we have Eldar in a strong supporting role - not as prophets of doom or at the head of massed armies but just two of them, still somewhat mysterious but portrayed as individuals and giving a nice smaller-scale feel of what it's like for humans to deal with them on a personal level. There's also a fair amount of Eldar culture and history tied up in the story so it's not quite as imperial-centric as many of the novels.

I won;t spoil it so that's about all I have to say. It may have been intended as part of a series, but there are no prequels or sequels that I know of - it's a nice self-contained story with a beginning, middle, and end. It's also a nice example of how things work for a Rogue Trader if you're interested, especially if you're considering the RPG.

This time off for everyone else is wrecking my routine, so it's been a challenge to post this week. So instead of a lengthy post here are a couple of pictures of the latest crop of D&D character mini's: 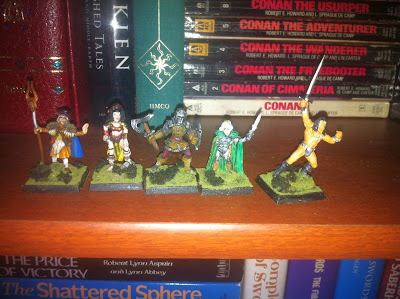 Now I didn't do much painting on these - a friend of mine found them at some garage sales and rounded them up for me. I did minimal touch up and rebased them. I have not used a lot of painted-by-other-people mini's in the past but these were decent enough and expanded the options that much more. There was a surprising number of female figures in this batch and that's good because I don't have a ton of those painted up. 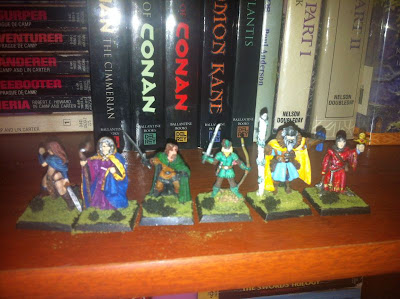 After working with some 1/72 plastics for my DBA armies those Reaper figures in particular are gigantic. They are typically used for characters so "bigger than life" and all that but still ... 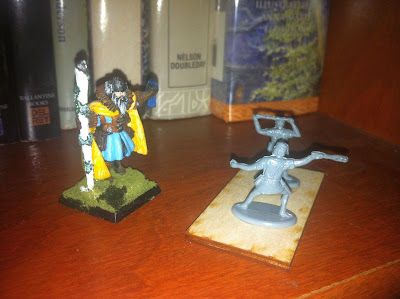 A pair of Ancient Spanish slingers face off against a giant! The slingers are supposed to be 20mm scale and are about 23mm tall. That Reaper fig is 35mm tall! That's huge! D&D type mini's used to 25mm scale, but over the years - and in no small part due to Warhammer - crept up to 28mm and some have gone to 30mm. This guy is over 7' tall even by that standard! No, I'm not counting the base - that just makes it worse in some ways. I suppose the main criterion is "does it look cool" but it causes some problems when you've been at this a while - those Grenadier and Ral Partha figs from the 80's look somewhat vertically challenged these days. My old dwarf fighters look a lot more like gnomes next to these guys. Ah well, I suppose it's a good problem to have.
Posted by Blacksteel at 7:08 PM 1 comment: 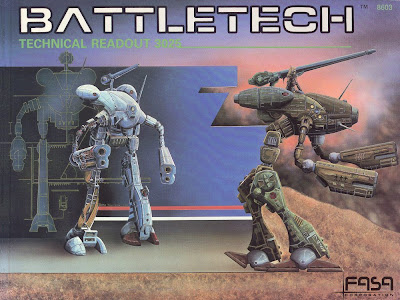 The Apprentices have been digging into Battletech more the last few weeks. Part of it is that Blaster is reading some of the old novels, and part of it is that Blaster and Red are both playing a lot of Mechwarrior Online. They've been poring through the original rules and the 3025 technical readout, designing mechs and rebuilding the ones that suck, just as my friends and I did years ago - it's quite a bit of fun to watch.

The thing is I know that eventually they are going to want to play the RPG - partly because I've told them about our old campaigns - and frankly the RPG rules for all 3 editions are pretty clunky and not really anything I want to mess with anymore. So I've been looking at alternatives.

Option A is to run it in Savage Worlds. I like the rules and it plays fast and there are analogues of pretty much all of the weapons and armor available in various sourcebooks. It may be a little more cinematic than MW campaigns typically are but I think it's manageable.

Option B is to run it in Traveller. This one feels more like the older MW rules and the gear is there, so it's another strong contender. Plus it would give me an excuse to pick up some more Traveller stuff. The downside is that I would need to sit down and come up with a career table for the various career types - mechwarrior, tech, aerospace pilot, tanker, trooper. That's not a huge downside as I like the idea of doing it, but it will take some time and probably some tweaking to get it right.

Option C is to run it in GURPS. One of my groups played MW in GURPS years ago and there were several guides to it on the net back in the late 90's. I know it would work, but I'm still hesitant. I have pretty much let GURPS drift off of my "current games" radar for the last few years and I would have to get familiar with it again. Also, I'm not sure I'm all that fired up about GURPS anymore when I have these other lighter rulesets available.

Those are the 3 main options in my head right now. They aren't ready to start a new campaign right now anyway between our D&D and our Supers campaigns. This is good because it will give me time to come up with a starting situation and look through my old BT/MW material for ideas. The basic idea right now is "mercenaries" where they roll up all of the members of the unit as characters then play who they want in each session. Oh, and they also need to round up some more players too. This may end up being this summer's extra campaign, but the wheels are already turning.
Posted by Blacksteel at 12:00 PM No comments: 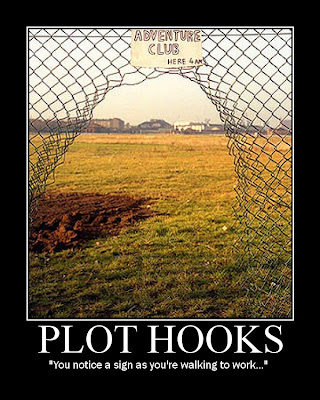