I finished up the Chaos half of the set:

These were a little more fiddly than the Marines and some had a harder time staying together. There are some bits not attached in the pics. 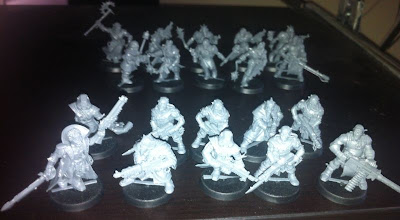 The cultists are simultaneously the most useful and least useful units in the set. Less useful because I don't particularly like basic human cultists cluttering up my spiky badace chaos marine army - just a preference. Most useful because they could be a gang from any cyberpunk or post-apocalyptic RPG or miniatures game out there. The shooter squad is carrying relatively normal looking assault rifles with a big machinegun and the leader has a long coat, sword, and shotgun. The assault squad is carrying pistols and various clubs and blades with a  flamethrower and the leader has a mutated-looking hand. They have a very Road Warrior punkish look to them and the next time I run something in that genre  (Maybe Deadlands HOE?) they will fit right in. 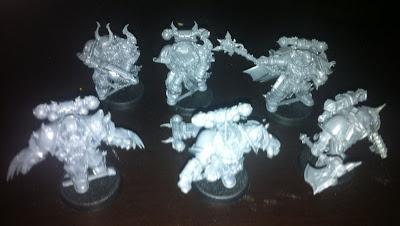 The chosen are supposed to point the way towards a new look for chaos marines - more ornate, warped, and less tied to current Imperial marine fashions. I like it. The only problem is that in the current codex they just aren't all that great at anything and the only advantage they have that I can use is Infiltrate. Plus they're competing against Chaos Terminators in the Elite slot and I have a pretty strong like of termies. We're supposed to see a new codex in early October so this won't be a problem for much longer. I saw someone comment that if the mechanics weren't spectacular he was going to use chosen to represent normal chaos marine just because they looked so good and I can certainly get on board with that. 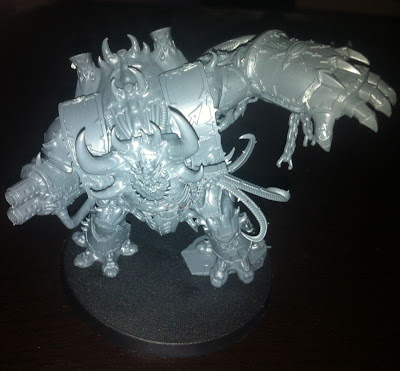 The big daddy of the set is the chaos Helbrute. This is effectively a chaos dreadnought renamed. I have to admit that I like the look - it's a much more menacing pose than that old static chunk of lead we've had for the past 15 years or so. With the fist and the multi-melta it's a pretty solid combatant, though we will have to see how that plays out with the new rules. At least there's no mention of the old fire frenzy rule, which single-handedly made Chaos Dreads vanish from the tabletop for much of the last 4 years.

I'm not sure how I'm going to paint these up. I may wait for the new army book and see how things work and what my options are.I have my preferences as far as color schemes but with chaos it's more appropriate in some ways to have units with completely different color schemes in the same army. I'm considering the challenge of making sure that every unit in my army has a unique paint scheme - at last I won't get tired of the colors.

Oh and I went ahead and did the bikes too: 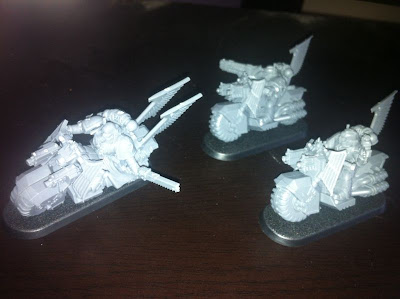 You kind of need them to finish out the box set marines. I still don't like the standard Dark Angel colors but I think I've come up with a color scheme that I can live with. I still don't need another marine army, but Apprentice Who is asking about playing 40K and it would make a nice starter army for him, with some additions from my pile of  "uncommitted" space marine stuff.
Posted by Blacksteel at 2:30 PM No comments: 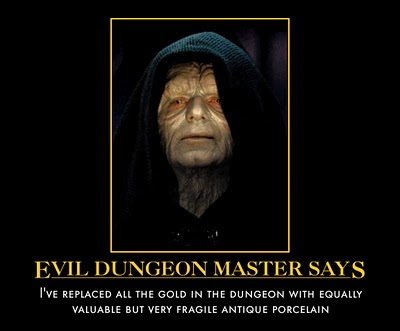