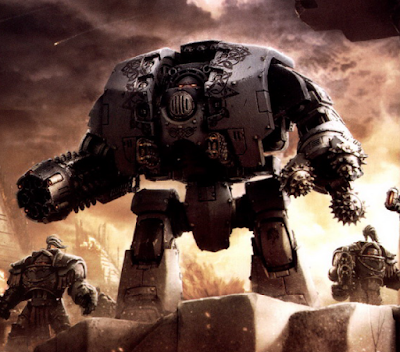 I picked up a Leviathan Siege Dreadnought earlier this year - that's the monster in the picture up there - and this has lead to a conundrum: I'm not sure which army to put it in. It's a Forgeworld unit which means they're a little pricier than regular 40K so I'm not looking to pick up a half-dozen anytime soon -AND- they cost you a Command Point for each one you include in your army so I probably don't want multiples in an army anyway unless I have a particularly cunning plan.

Now Contemptor Dreadnoughts are all the rage right now because of the variety of weapons they can include - the current meta-winner is putting two "twin volkite culverin" for a ridiculous number of shots and the chance for a bunch of mortal wounds. I love Contemptors and I do have a half-dozen or so of them scattered across several armies, loyalist and traitor alike.

That said Leviathans are still bigger and still very cool and pack weapons you don't get on the Contemptor class.  The issue right now is having only one of them and having roughly ten armies it could join. Some of them are right-out from the start though:

Yeah, I have too many power armor armies, I know. But let's talk about where the big dread makes sense:
One of the reasons for this post is that I would like to get it painted and on the table so I need to commit at some point and while pondering a thought occurred to me. Loyalists have the Redemptor Dreadnought - the newer Primaris dread that is much bigger than the traditional dreads and is a very popular choice right now. More specifically my Crimson Fists have two of them, Blood Angels have one, and my Dark Angels have one ... but it's not an option for Chaos. There's not a comparable big dread for Chaos - other than the Leviathan.
So this has helped me narrow things down. I was really leaning towards making him a Black Templar but I could just put a Redemptor there and put the Lev into one of my Chaos Marine forces. Right now I'm leaning towards DG or Iron Warriors.
And that's where it stands right now - down to the last few choices. Hopefully  I will figure it out this week and get this particular project started.