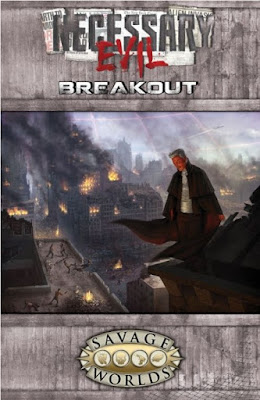 Well, it's out. I don't know much about it, but I'm interested. The blurb:


The villainous resistance of New York City was one of the last to hold out against the alien invasion. The evil v’sori responded by placing the island of Manhattan beneath an unbreakable energy field.
Trapped within, the city’s toughest and most cunning super villains must battle it out for food, weapons, resource, and dominance. But they are not alone. A strange creature swarms in the sewers and subways. Powerful gangs rise and raid their rivals. The Black Hand controls a vast black market of scavenged goods. And rumors of a way out are–so far–nothing more than street gossip. Only the strong will survive, and only the most calculating will eventually…

Additional notes specifically mention going to street-level supers and that's probably smart as a concession to challenging the players. Original NE could get tricky as more super type supplements have been added to the game over the years - but that's part of the fun of running a super-powered game right?

Also setting it in a real place (well, sort of) is a nice change too.

Anyway, I don't have it yet but I likely will soon and I'll have more to share then.

Whether online or tabletop, some conversations happen again and again...

Star Wars: The Old Republic is the current Star Wars online RPG. I've gotten back into it recently and I like it, a lot. The big news for Fall 2015 is the coming expansion "Knights of the Fallen Empire" - trailer below:

It's pretty slick and shakes things up quite a bit by having this new threat dispatch both the Sith Empire and the Galactic Republic. There are some controversies though:


It's the last point that I want to address because it links back nicely to tabletop RPGs: Whats's more important, a character's written background, or a character's actual experiences in play? 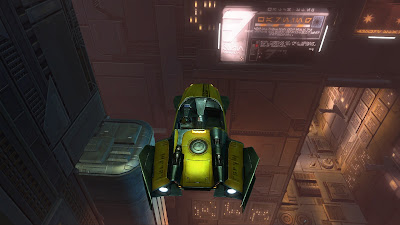 For SWTOR, max level characters have played through a lengthy story with 3 chapters spread voer hours and hours of missions, travel, combat, cutscenes, and dialog with NPC's. They've made choices regarding who lives and who dies. They've chosen to follow the light side or the dark side. They may have abandoned old friends to their fate/ They may have romanced others, and may even have married a close companion. They journeyed through this in real time and their character has certain qualities because of it.

The insta-60's will be able to read the official class backstory on the webpage, but they won't be making those choices, meeting those other characters, killing various monsters, or romancing those NPC's, They won't have the titles or the gear or the strongholds or the suite of companions that the played-thru characters will have.

In a tabletop game characters developed in play have reasons for the things they do, the reactions they show, the stuff that they carry, and the relationships they have with various NPC's, often earned through either triumph or tragedy. Characters with 3 pages of background and not hard-won experience may look complex but it's not the same. "My character is the king of Greymoor" means one thing when it's a bullet point on your background story compared to when it's a title you earned by taking it from a usurper in single combat while the rest of the party took on the royal wizard and the elite bodyguards. 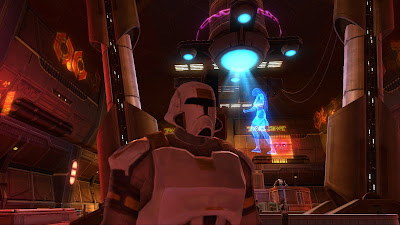 Now a lot of people think a deep written background is an important part of a game and I don't really have a huge problem with it. I do think in-game experience trumps it, but using it as a starting point is fine.

SWTOR and the expansion has a problem similar to having a new player join a long-running campaign: If my player characters are 9th level, where do I start the new guy? 1st? That's not really practical. 9th? That seems a little unfair to the existing players who had to work to get here. Recently I've gone with a policy of "current campaign level -1" for my Pathfinder game. I don't know that it's the best solution, but it feels reasonably fair and it works for us for now. A new character has to work a little bit to catch up to the veterans but he's not useless, fragile baggage for multiple sessions. For SWTOR I suppose that would mean insta-55's and making them play through the prior expansion before getting to play the latest one. That's probably not a great approach business-wise in the instant gratification age we live in. Not if you want them to spend money, anyway.

So I understand Bioware's decision, and you won't find me ranting that it's some kind of betrayal. It does seem counter-intuitive and somewhat counter-productive to take a game who's big selling point is "experience a Star Wars story" to encourage players to skip the first 60 "chapters" in a 65 chapter tale. I get the economic realities though. It really is a similar problem to the new tabletop player - I can't run a separate game for the new player to begin at level 1, level up through my "content", and then join the party once they hit level 9, mainly because I'm not a server. I'm also not asking my players for money either. 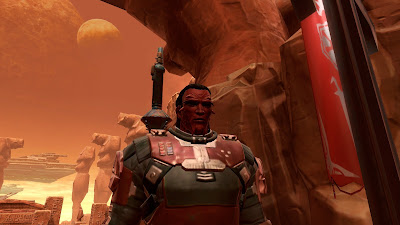 One note - This is not the first online RPG to do this. Everquest, Everquest II, World of Warcraft, and probably some others have done it too. I think WOW even sells instant max-level characters in their shop. So it's become an accepted thing in the industry to do this.

Still though - In a tabletop game you might not have as many options but online you do and given the choice of "you can play through 60 levels of a great game with multiple story lines" or "here, read this 3-page summary of your back story" I know which path I'm choosing.
Posted by Blacksteel at 12:00 PM 2 comments: