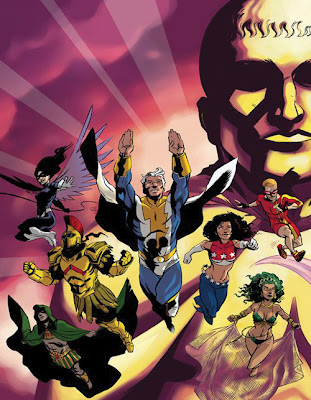 That's most of the plan for the short term. In the medium term, I've paused my Champions obsession for a moment to contemplate actually running a sustained M&M game. Setting? Opposition? System?

Yes, system. In reviewing my M&M stuff I realized that as much as I like the 3rd Edition I have a ton of material for 2nd edition, as I was building up my 2E book collection right before 3E was announced. The obvious answer is "CONVERT" but that does take some extra work. While I think 3E improved a lot of the game in numerous ways I didn't think 2E was bad. I have multiple rulebooks, adventures, and a whole lot of Freedom City that I could use as-is, without having to do any extra prep other than the normal things I would do to run a game anyway.

For 3E I have multiple rulebooks, the Threat Reports and Power Profiles for support, and the Emerald City adventures among others. So there's plenty to work with there. I just like some of the older stuff and not having to convert it makes it very attractive to this somewhat time-crunched  DM.

I've become very attached to the idea of running Time of Crisis and Time of Vengeance for a group which would tie them in to the whole Freedom City setting and open up some options there for some of the other supporting material that I have. All of that is written for 2E.

I also like the Emerald City arc once it gets going and that's written for 3E.

So, could I run two arcs at the same time, say one in 2E with the grown-ups in Freedom City and one with the Apprentices in 3E with Emerald City? Assuming we had the time to do both, I would still be worried about confusing myself with slightly different system mechanics, so I'm not sure that's even a good idea. Our Pathfinder experimentation showed me that can pop up when running two similar systems back to back but I wouldn't let that stop me from trying.

Just to complicate things there's some talk about revisiting Freedom City in 3E next year - probably late next year going by Green Ronin's recent scheduling - which would set up a transition from 2E to 3e very nicely if I could work everything in over the next year and the Freedom City campaign players wanted to update the mechanics.

All of this also ignores my potential homebrew settings and adventures - I can probably use either edition for those. It's really just a question of published material.

So I suppose it's not a terrible problem to have but it's the one that's been on my mind this week. Considering that both of my 4E D&D campaigns are being converted from older material I think I can say that I like doing that for my games, I'm just not sure I want to take it on for another game.

Comments are welcome as always, especially if you've tried running multiple similar games simultaneously, or if you've spent extensive time with both editions.
Posted by Blacksteel at 12:00 PM 4 comments:


There's a lot going on. Recent Items of Note in the Superhero RPG field: 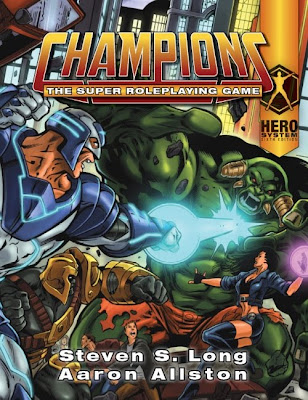 Champions is moving in an interesting direction with Champions Complete. A note on the product says it best:


"This product (Champions Complete/HERO2000) is a stand-alone, moderately priced book for playing Champions: arguably the most popular and longest-running superhero game in roleplaying history. It contains all of the rules necessary to play Champions: The Super Roleplaying Game, with no other book required."


I'm still not sure how I missed this one, but the chatter on the forums has it as a sort of 6th edition version of the 4th Edition BBB in design philosophy. I wholeheartedly endorse that approach! I get the whole "it's a system" thing but I think it's a lot easier to sell people on a single game book than it is to sell them on a basic book + advanced book + campaign book just to get started. This should be a positive move after a rough year or two for Hero.

The only negative is that it's a $40 softcover with a black and white interior. Where are they printing these? That's the same cover price as the DC Adventures hardcover that's full color and presumably has some licensing costs built in. I won't compare to WOTC or Paizo hardbacks these days as I know the volume is quite different, but that seems high to me for what it is. The Marvel Heroic basic book (full-cover softcover) is half the length (128pgs) and half the price at $19.95. M&M's basic rulebook (full cover softcover) is slightly longer and only $32.95. If you like the game it's probably not a huge thing but it seems like we are past the point where black and white interiors are standard, so I was hoping for full-color or a lower price to draw in some new attention. 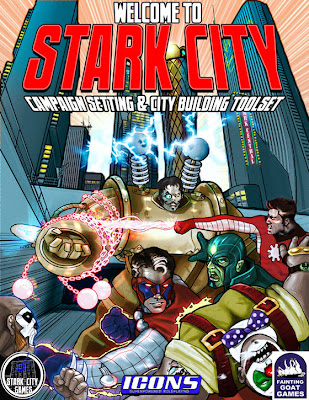 For ICONS there's a nice new brochure and map of Stark City here. Other free previews:

I'm looking forward to this one quite a bit. Since I already have my own roughly-outlined city, I'm either going to steal parts of it or I may turn it over to one of the Apprentices to take a shot at running a Supers game themselves. 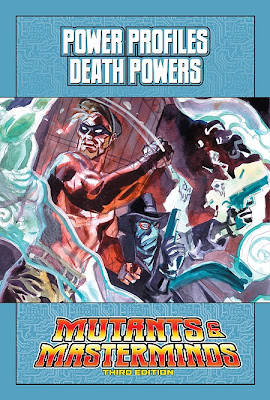 For Mutants and Masterminds the anniversary kickstarter continues and is about to hit a stretch goal that would add in writeups of characters from old editions for 3E.

Power Profiles is winding down and is supposed to wrap up by the end of the year. Since we just got #36 "Death Powers" I'm guessing it will end at around 40 of them. They are a neat little package.

There is also something in the works titled Cosmic Power. I'm assuming that it's a sourcebook on that kind of campaign but I'm sure more details will follow. 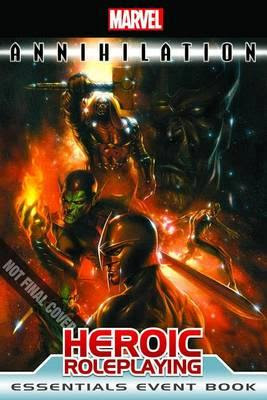 Marvel: Amazon has the Annihilation books releasing in July. Could be fun. Maybe I will have run some Civil War by then... 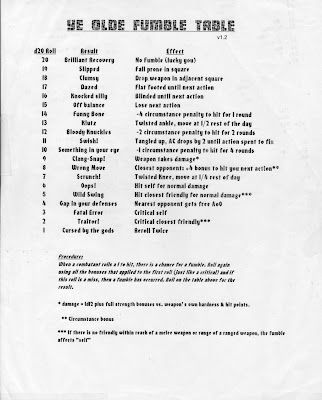 D&D 4: Heroes of the Feywild Review 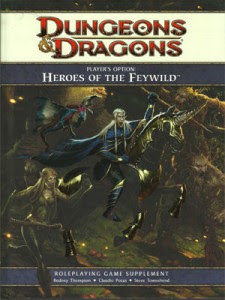 I'm not going to cover this one in exhausting detail as I assume most of the people interested in this sort of book probably already have it. There is nothing in this book that is absolutely essential to a D&D campaign, but it is full of good and useful stuff that can definitely enhance a campaign. The reason I'm doing this now is that a lot of this material wasn't used in my previous campaign and is only showing up in the one I'm running currently.

We open with a 20 page chapter about the Feywild. This is good for players who may not own the Manual of the Planes and other more DM-focused books that discuss this stuff. Assuming your campaign uses the concept, of course.


One thing these options do is make a 4E Mythic Greece campaign even more playable, as there is more mechanical support that is properly flavored. 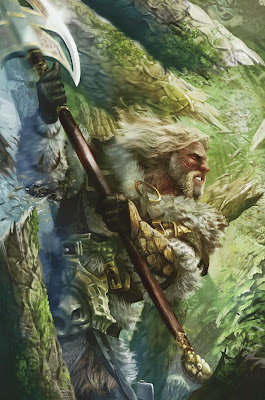 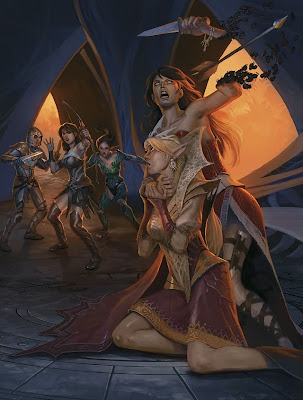 After classes we get Themes. These are a nice addition to 4E as another layer of character information besides race & class. They usually have something to do with ancestry or culture and have a stronger mechanical effect than a background in most cases. I do have experience with these as one of my players is running a Warlord with the Fey Beast Tamer theme, which means he runs around with a baby owlbear. It's been a source of much humor and it does give the party another body on the table when things get nasty and it could develop in some interesting ways down the road. There are 4 Feywild-related Themes in this book and I would allow any of them in my gae if they appealed to someone. 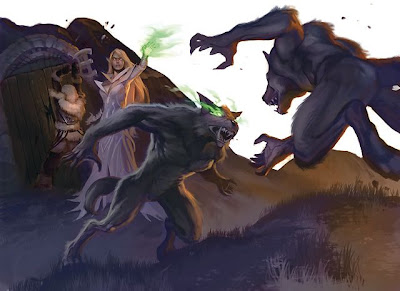 Then we get to the last section of the book and it's the one I was the most surprised to see. It's called "Build Your Story" and it's a random background generator like the old Central Casting books. It's also Feywild-specific. It starts with "Upbringing" and you can roll or choose from the entries on the table and each option directs you to pick one of several other options, winding thru about 15 pages of material including civilized lands, wilderness areas, dark lands, and various events that may happen during the characters earlier life. Some of them involve skill or stat checks and making or failing those rolls affects the next section you go to in the book. This is all meant to be done prior to choosing your class and skills and such and it's a cool little tool to include in a book like this. Sure, a lot of players will come to the table with a concept ready to go, but if you want to get into details like place names and a sequence of events it's a handy little thing to help fill in some background.

As you might be able to tell by now I liked this book a lot. There is good background material, interesting mechanical variations, and just a whole lot of "good" and not anything that I see as useless or overpowered. I'd call that a win. It's a shame that we didn't have a nice long run of books like this one. 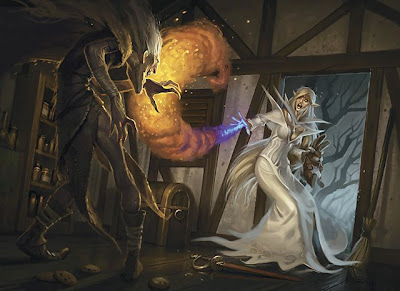 Perspective: Looking at some of the reviews that came out at the time the book was released - oh, more Essentials-vs.-non-Essentials 4.5E talk spilling over into reviews. What a waste of energy that turned out to be. In general most reviewers seemed to like this book better than the shadow book. Lots of fears about the Pixie being overpowered - I'm not so sure. Much love for the Berserker and mixed feelings about the rest. It's nice to be validated in some ways by reviews from a year ago. I think most people were encouraged by the quality of this book and had high hopes for the future of 4E material. Well, they did for a month or two longer anyway. Such a shame that the designers really got going just as the game was set to come to an end.
Posted by Blacksteel at 12:00 PM No comments: 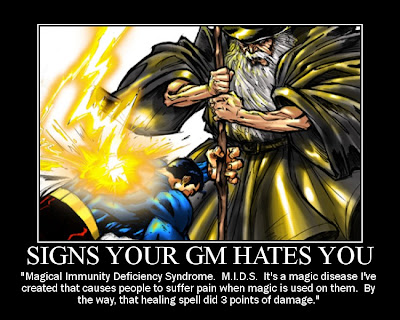