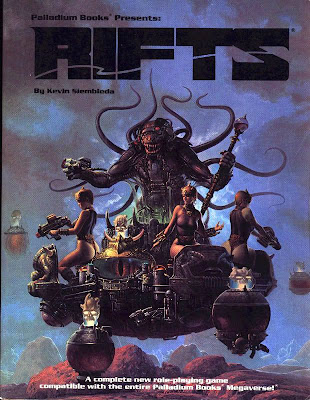 (Everyone has been on vacation this week which has killed my posting times. Gaps should be less frequent next week)

I know Rifts came out in 1990 and I'm assuming it was around Gen Con since most major releases are, but I don't remember the exact month. I do know that it was huge at the time and my college group jumped on it as soon as someone got the book. We tried the original system, ran into some problems, then decided to run it in Hero system which was our go-to game at the time - fantasy, sci-fi, supers, mechwarrior - it all worked in Hero, and we loved the Rifts background and concept.

So we fired up Hero and debated whether a Juicer's stat bonuses were just inherent stat bonuses or should be aids to the various abilities like STR etc. Should extra attacks be an aid to SPD? How to handle Mega Damage? Armor piercing? Killing attack ? I said screw it and made some kind of Ninja-guy I could reasonably call a "crazy" though he didn't have any mind implants. I had recently re-read The Blackcollar books by Timothy Zahn and was basically making a blackcollar though no one else knew it. The game was fun and ran for at least a few months before we heroed on over to something else, but Rifts has always managed to pop up again every few years in my games. I still have that rulebook I bought in 1990 and it's still intact despite multiple periods of heavy use over that 20-year lifespan, a tribute to some amazing softback binding technology.

I last ran a game of Rifts in 2008 (using the fairly recent "Ultimate Edition") as a change of pace from the end of an 18-month D&D campaign and after that I can tell you there are really three approaches to running a Rifts campaign in the modern era:

1) Drop the mechanics and run it in another system. This is what we did with Hero and I've seen rules for doing it with GURPS and with Mutants and Masterminds. It's no coincidence that it gets ported to superhero systems a lot - they are the rules best suited to handling the ridiculously wide power levels a group of PC's can have.

2) Add house rules to the basic Rifts game to make it palatable for your group. This is what I have done most of the times I have run it and it can work well, though it can also lead to major headaches. I think the trick is don't try to re-invent the whole system, just patch the parts that don't work for you. This can be difficult for some of us.

3) Smile, embrace the crazy, and just run it as-is. Don't try to make sense of it. If someone has a problem with it, point to the rulebook and say that's just the way this universe works. It saves a lot of prep time and a lot of agonizing over things like "balance". Everyone should probably do this at least once just to see how the basic mechanics work before modifying them with house rules.

I'll have a few more Rifts posts in the next week including my house rules and notes from my last campaign. It's a game that has inspired, excited, and frustrated me for 20 years so it deserves a little celebration.

Posted by Blacksteel at 10:25 AM No comments: