Call of Cthulu - Back on the Shelf 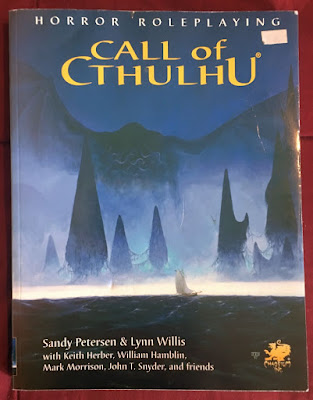 I have an unusual relationship with Call of Cthulhu. I think it's an important game, but I haven't played it or run it very much and I don't really feel driven to do much more of either. I don't hate it but it's a different style of play to what I usually do and that probably explains the whole thing.

I think it's important because it was roughly the first game to push character advancement to the side - it's not particularly critical to the typical game, and odds are it's not going to matter in a few sessions anyway. Besides the initial rush of fantasy games after D&D we had some Sci-Fi games that were still mostly about breaking and entering and combat, and we had superheroes, but CoC was the first "investigation" type RPG and the first one where the expectation was that characters were not on a path to greater power - survival with enough sanity left to function was a major goal.

I've played a few games, a long time ago. It was interesting, and I would probably play if someone I knew decided they wanted to run a game. I don't particularly want to run it. Maybe one adventure for the Apprentices and some friends just so we could say we've played it and to expose them to that other style of play.

I think my biggest issue with it is that you're not likely to hear about that epic CoC campaign that's been running for 20 years and a lot of the current PC's are the kids and grandkids of the original PC's expanding their kingdom, etc. The very nature of the game cuts off that kind of long term saga. It's more like a typical horror movie series - the common thread isn't the protagonist of each movie - it's the  bad guy, like Jason from the Friday 13th movies. CoC isn't about building a legacy, it's about thwarting the Mythos over and over and the cast is likely to be significantly different for each "movie". I'm all about the "doomed hero" when it comes to a book or a movie, but I am less interested in playing that hero in a game. 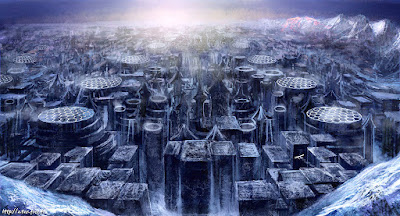 That said my favorite Cthulhu story (one I consider to be a great adventure story regardless of the Mythos connections) is At the Mountains of Madness. I know they turned it into an epic adventure for CoC and one day I will own it. It's the one CoC book I know I could turn into an awesome campaign and the one that would be worth setting aside the time to play. I'm a sucker for the Lost City adventure anyway and this is yet another example of that. Other than a short one off adventure to try things out with my current players this is what is most likely to get me to play. Heck I could turn that into an epic D&D adventure, but I'd like to run it in it's native game if possible.

The reason for the post is that I finally picked up a copy of the game again this month. I had a copy for years but since we never played it I got rid of it prior to the last move a few years back. Sliding over towards 'collector" once again I decided I needed a copy on the shelf. Not 3 copies, not one of each edition, just one that  I could reference if it came up in conversation and one I could run if someone came over and said "I think we should play that." No, it's not tough to justify these things at all. It's one of my projects for this year - filling in a few gaps in the library, mainly games in the "why don't I have that?" class. This is one more checked off the list.
Posted by Blacksteel at 12:00 PM 3 comments:

Experiments in RPG: Wrath of the Righteous 4E? 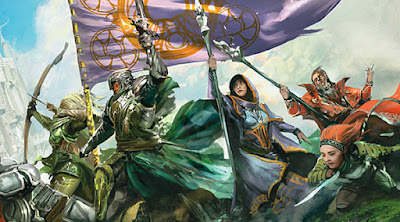 It's been a few months since We called the Wrath of the Righteous campaign. Some of it was the system as Maximum Pathfinder is something I find myself a little less interested in these days. A lot of it was the campaign itself as it really gets tangled up in itself in the latter half of the campaign. I think it's a downside to having multiple authors writing each of the six adventures as they get locked in on something they think is cool even when it doesn't really fit with the rest of the campaign. The single biggest example of this problem is that at a certain point the party pretty much has to work out a deal with one demon lord to help them against another demon lord and I mean it is assumed for the rest of the path that this is how things are. To me this is a ridiculous assumption for a few reasons:

That said I hate leaving a campaign unfinished. I have done some work re-figuring how the campaign ought to go to be more to my liking. Then I had an idea - if I am going to have to rework the whole thing anyway before I would even consider finishing it, why not fix the mechanical issues to? This kind of epic level play is exactly what 4th Edition D&D was made for! I looked at some potential encounters and how it might work and it looked completely do-able.

So I asked my players how they felt about it and they were not instantly opposed to it. We talked through some points and I'd say there is a chance this will actually happen some day. I'm not stopping my Deadlands game or my M&M game for it, but it may find a home on the schedule down the road. The characters translate fairly well and would be about 11 - 13th level. The one glaring issue is the Cavalier as there is not really a class in 4E that is all about mounted combat. That's the one part that does not yet have an easy answer but I suspect we could find something he would be happy playing that's still a big tough guy in heavy armor.

So that's how that's going. More when it actually becomes a game.