Point-Buy games have had "builds" for a long time - Hero, Gurps, etc. With 3rd Edition D&D all of a sudden D&D had "builds" and one of the plagues of the modern age of gaming fully flowered and has yet to really die down.

I'd say for most players, one of the attractions of RPGs is the opportunity to play a character that does things you do not do in your normal life - sticking swords into monsters, throwing magic, or flying a spaceship. D&D 3E (and later) and Pathfinder are very good at letting us do that with tons of options and per-level multiclassing and point buy attributes - compared to the old "roll up your stats and figure out what to play" days it's a paradise for those who like to craft their character to match their specific vision. That's nothing but a positive. Well, almost...

The coal-filled stocking in this approach is that there are a lot of people who, once exposed to your vision of Abercrombie the Barbarian Prince will quickly point out all of the places it could be improved mechanically and all of the less-than-optimal choices you have made in creating him. "Why does he need a 16 Charisma - dump that to 8!" is among the kinder things you may hear. Communal min/maxing is just as annoying as individual min/maxing  when it overwhelms the original concept. Much like MMO players, groups of players around the internet will quickly determine optimal approaches to specific classes and combinations whenever new rules or options come out and are often regarded as "experts".

If you're playing some kind of arena combat game against other players this may be useful.

If you're playing any other kind of game, it's of limited usefulness at best.

Sure, push your DPS way up there, that's really impressive. Hey, now we need an assist on this diplomacy check - oh, you have a negative? Ok, never mind. How about Stealth? Knowledge? Religion? Most optimized "builds' I have seen sacrifice a lot for increased efficiency in one particular area and that's not always the best answer to the things that go on in a campaign and they can get to be on the boring side when you're not slamming through one combat after another because that's a lot of what they focus on. Also it can warp the rest of the party. If we assume the tornado of steel barbarian can solo any monster in the game, the rest of the party may de-emphasize combat capability to try and shine in other phases of the game. Then the barbarian's player misses a session and suddenly combat goes horribly wrong .

Now you do get the opposite problem sometimes where someone takes a bard or a rogue type character and turns them into the jack of all trades and master of all trades too. That's not great for the rest of the party and rather than one player getting bored you have all but one player bored.

A lot of these overpowered builds rely on stitching together very specific abilities from across different classes and supplement books so one way to keep a lid on it is to limit options. Pathfinder has probably the biggest active universe for this kind of thing right now. Sure, the Technology Guide is awesome for the Iron Gods Adventure Path, but if I'm running Rise of the Runelords I probably don't need android PC's with chainsaws and laser pistols running around so the answer there at character creation is "no". 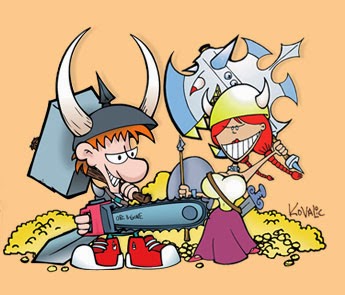 I've played and run a lot of games over the years but I have to say I've rarely seen the need for maxed out PC's. Right now the published adventures I am reading, mainly Pathfinder APs and the new D&D 5E adventures certainly do not demand apex character designs. So it's not pressure from adventure writers that drives optimized character designs.

I have found that campaigns are more enjoyable when people are playing a character they really like and that is often tied to designing it themselves. "Interesting" and "memorable" do not necessarily equal "efficient". Even when looking for power combos, if you find some combination of abilities that is particularly effective how much more satisfying is that than finding it out from some guy on the internet before the game ever starts? For Delve Night at the FLGS an internet-optimized hurricane of evocation may be fine but in an ongoing campaign it's different. Can you live with that character for a year? How about two?

Seeing it discussed online almost constantly I feel the occasional need to push back against the pressure to optimize everything.  Ideally players find a balance between "fun/interesting to play" and "mechanically effective" that works for them and for the rest of the people in their group. Hopefully they take a little time and consider the non-mechanical aspects of the character to round things out.
Posted by Blacksteel at 12:00 PM 1 comment:

Another old discussion that still seems to come up frequently online - some aspect of a game or the rules for some activity are "unrealistic" in the opinion of someone playing or running a game. Ah well:


Now I would never declare that a GM should never tweak the rules of a game. We've all done it, and it's just part of running RPG's. However, over the years I have seen a lot of bad house rules based on "realism" with no consideration to how it affects the rest of the game. I've seen weapon users (fighter types) nerfed into uselessness through misguided attempts at "realism", while magic zooms along unmolested. Hey, want to know what's most realistic? No magic! "There's no way even the best swordfighter in the world could do X in 6 seconds" - sure, but I bet he comes closer than the worlds best magician is going to get to throwing a fireball! Just go enjoy your fencing hobby or your SCA event or your programming job or your lifeguard job or your SCCA racing and set it aside when the tabletop game starts.

For me, "realism" is a consideration but not a deciding factor in almost any RPG.
Posted by Blacksteel at 12:00 PM 3 comments: 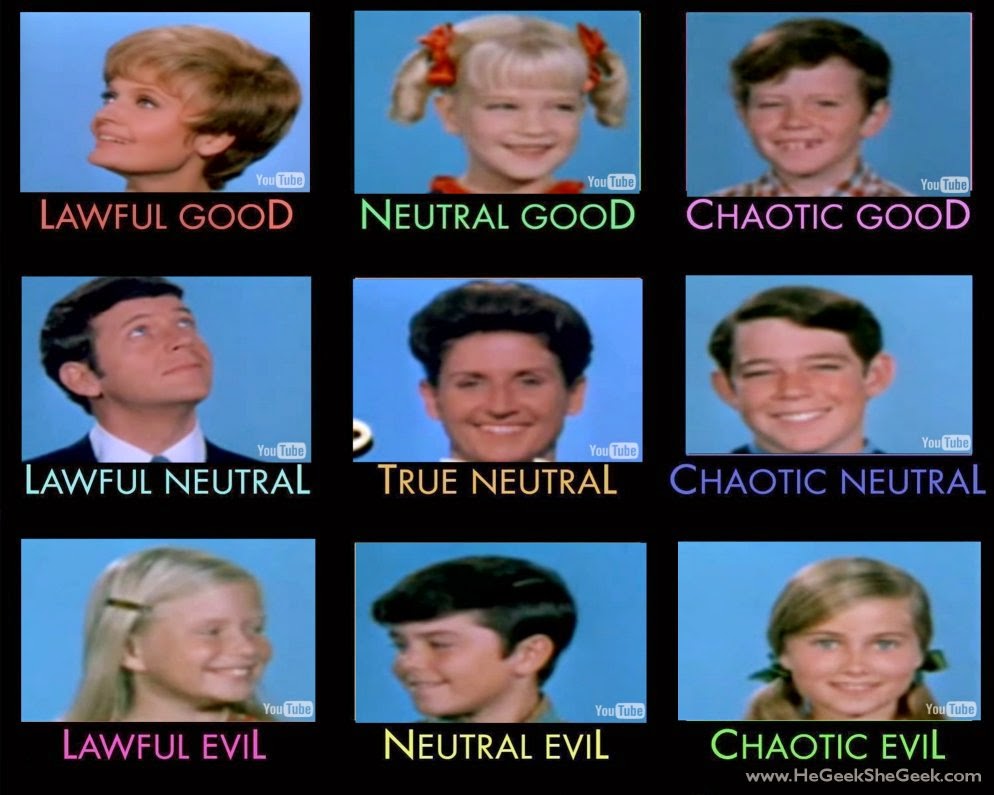 Such an old argument, but one I see almost every week somewhere on the internet, so I might as well state my piece. Here is my response to what I consider the three most annoying parts of this discussion:

Now sure, we've all heard the stories about the DM that has it in for the players - especially Paladins - and is constantly jerking them around with alignment issues. First, these are typically stories from the old days and yes, there were a lot of jerks back then. Second, why would you play with these people? There are so many people who play, and so many ways to play today (organized play, game store nights, online games) that there's no reason to spend your leisure time with people you do not like - so don't do it!

So yes, I'm sure some people have had bad experiences and reject alignment because of it. I see it as a tool rather than a weapon. It does require some DM involvement to keep players clear on the expectations, assumptions, and consequences, but it's a traditional part of a D&D game just like classes and levels. I've never had a reason to play D&D without it. I don't think it's essential to every RPG, I've played plenty that have nothing like it, from Star Trek to Shadowrun to Superheroes, but I think it's a notable part of D&D (and Pathfinder) and shouldn't be jettisoned without consideration.

Ironic note: 4th Edition de-emphasized alignment to the point where there was no Detect Evil type ability and that did not help its popularity at all as far as I can tell. I'm not sure if that means anything, but I thought it was worth mentioning.

5E and Pathfinder Back to Back 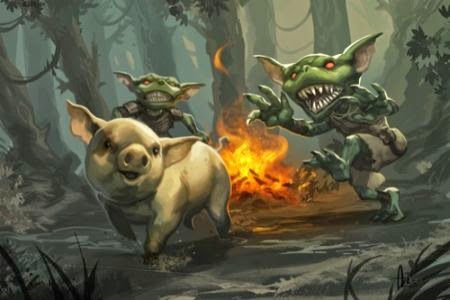 I played D&D 5E for the first time on Saturday, then had another session of an ongoing Pathfinder game (Kingmaker) on Sunday, and I thought I'd share some notes from the combined experience.

Like any first run with a new set of rules, there was some clunkiness at first. We had a DM and three of us playing so we had time to focus in on each character. I ran a wizard (necromancer), and there was also a monk (elemental) and a fighter (eldritch knight). We started at 3rd level. This was a homebrew adventure, not a published one, so we spent time getting acquainted and figuring out how we wanted to proceed as we picked up new information about the area we were in. We ended up sneaking in to a ruined city that was mostly populated by goblins and undead. There was plenty left to explore so hopefully we get to go back to it at some point and play some more. Afterwards we talked about the game and the high points were:

Biggest insight: I suspect the battle-cry for 5th edition games will be "don't I get advantage on that?"

Character-wise Pathfinder also still feels like D&D : ) Sure, the modifiers are composed of more elements but once they're on your sheet it's not that different from 5E - d20 + your normal mods (found on your sheet) and possible situational mods like cover and concealment. Interestingly enough we just hit 3rd level in the PF game too so this was a pretty direct comparison. The PF characters just felt like they could do more when it came to game mechanics. Not in power level, but in being able to do something that would affect a situation in some mechanical way, not just handwaving or adding color. It's tricky to pin down but that's how it felt. 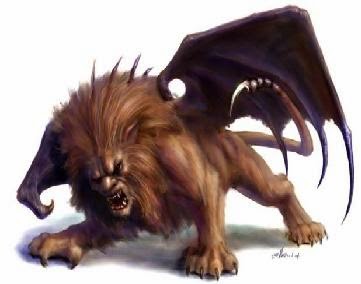 The other big note on 5E was from the DM who has run/played a lot of 3E/4E, mainly 4E for the last 5 years or so, and he said "The monsters are boring" - and I can't help but agree. I've been running Pathfinder and 4E the last few years and the 5E monster statblocks seem so ... mundane. Compare the stats for the manticore from all 3 games: 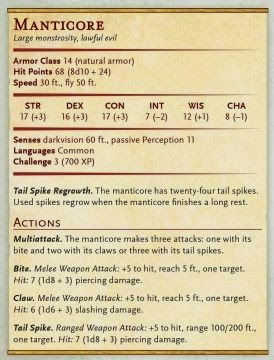 So the 5E manticore can fly but other than that it really just has melee and ranged attacks. 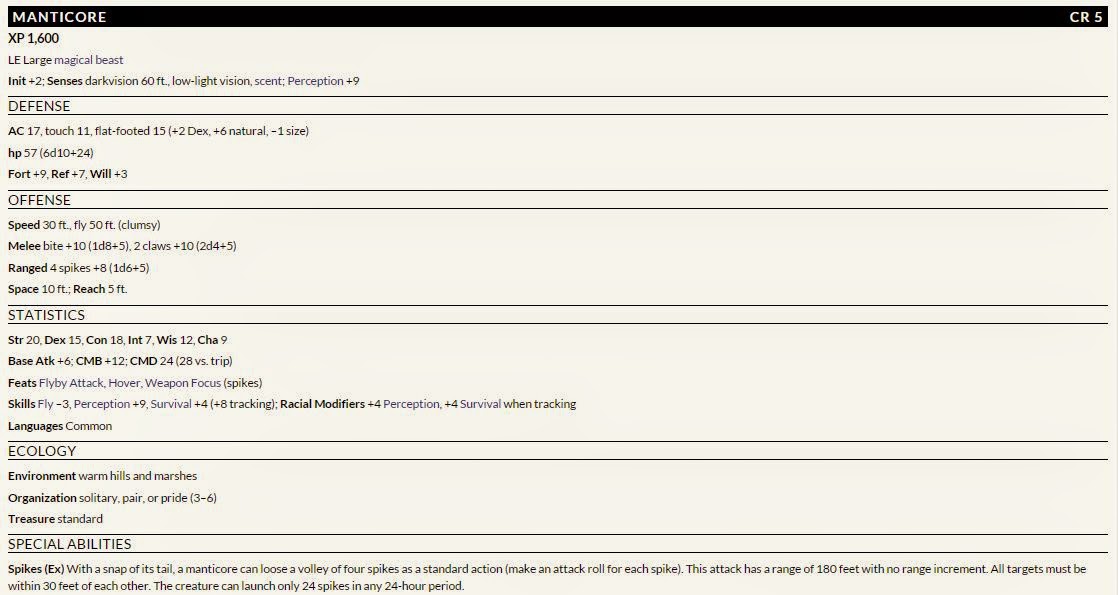 Pathfinder's manticore has flyby attack which is a normal part of the rules in 5E but not in PF. It also has the ability to track fairly well which could be interesting. 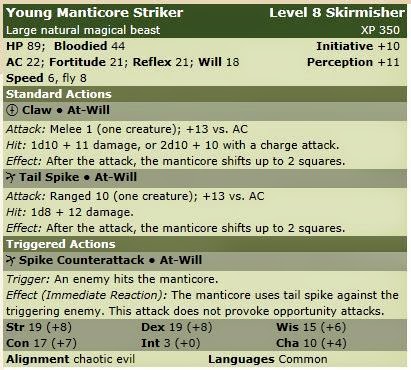 The 4E manticore has similar ranged and melee options but has a built-in shift on each of its attacks increasing its mobility beyond normal movement and it also has a reactive attack where it can throw spikes when hit. That action-reaction option does make fighting one a little more dangerous.

All of them fulfill a similar role in their editions of flying spike-flinger, no radical differences there. 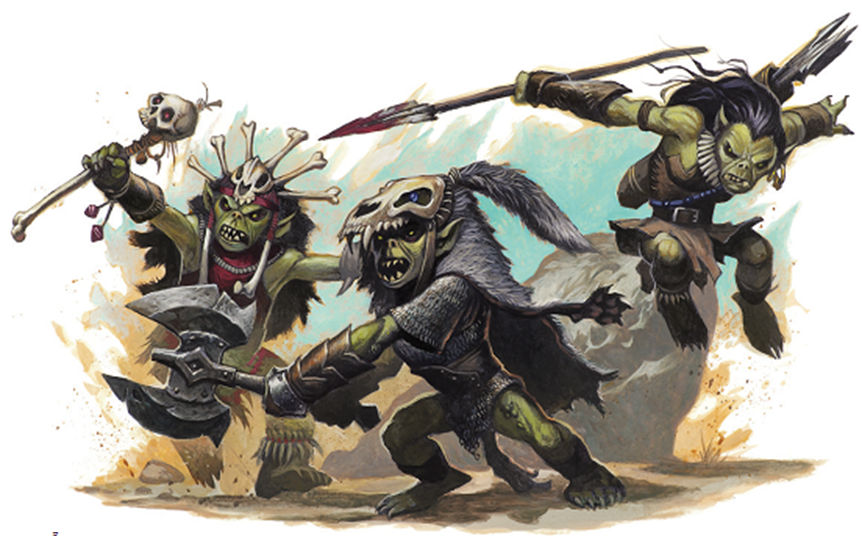 It holds true with goblins, too: 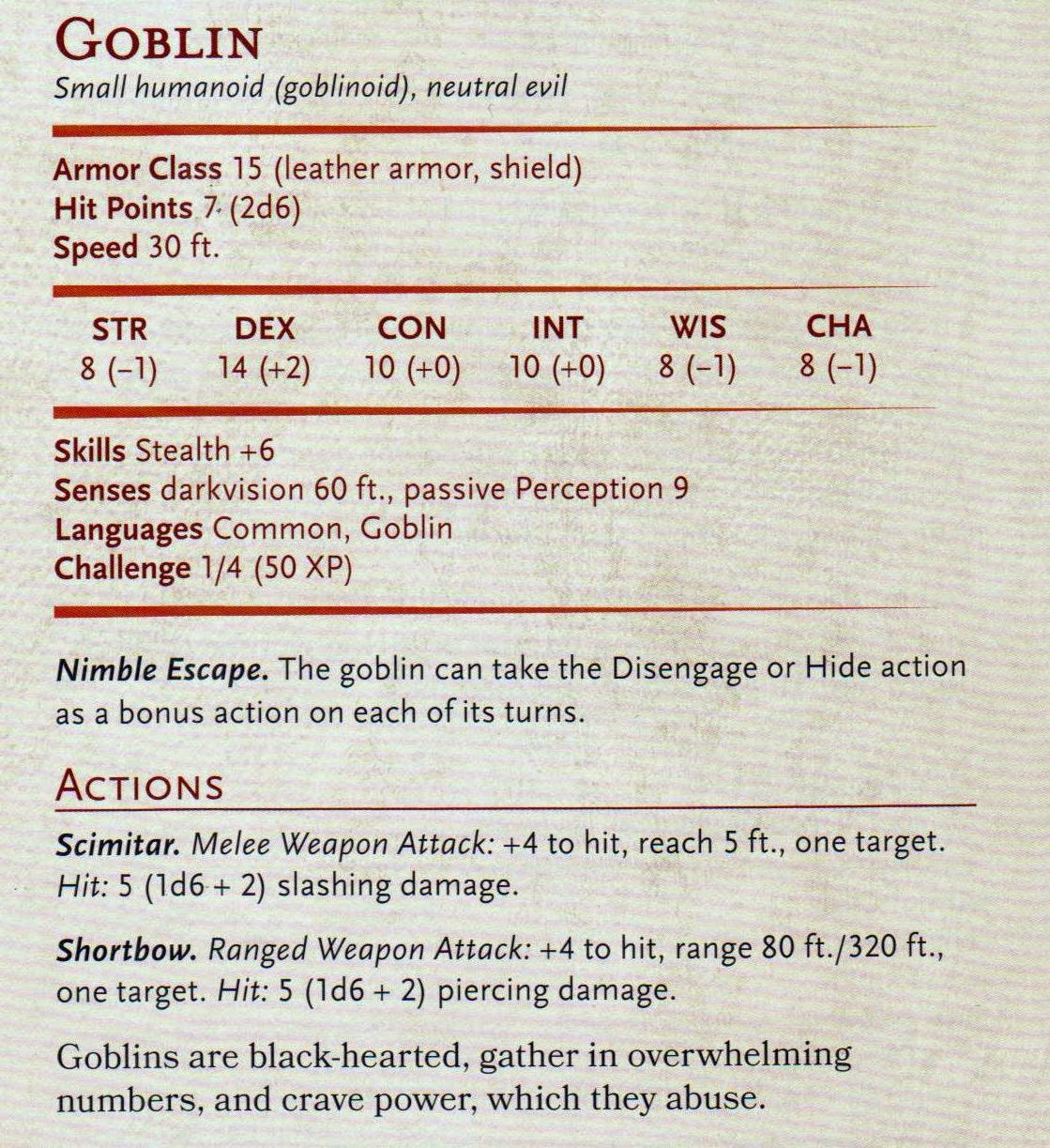 5E is pretty simple, but they do get the nifty extra move which was pretty frustrating to our fighter over the weekend. 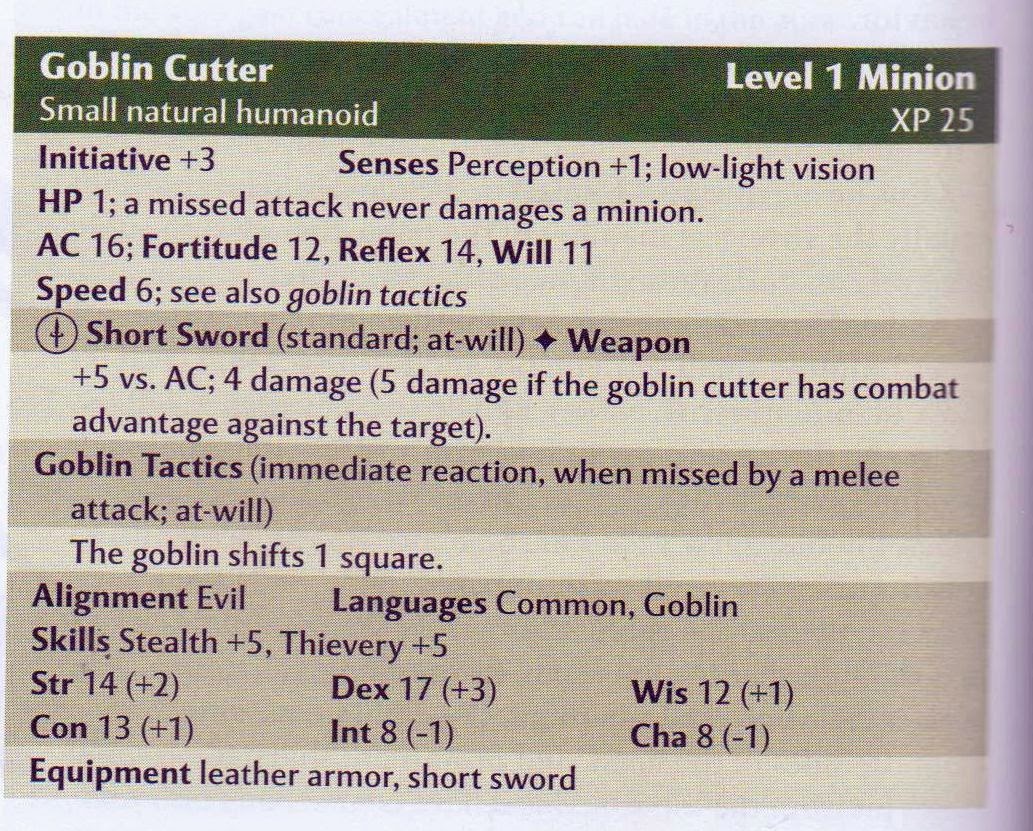 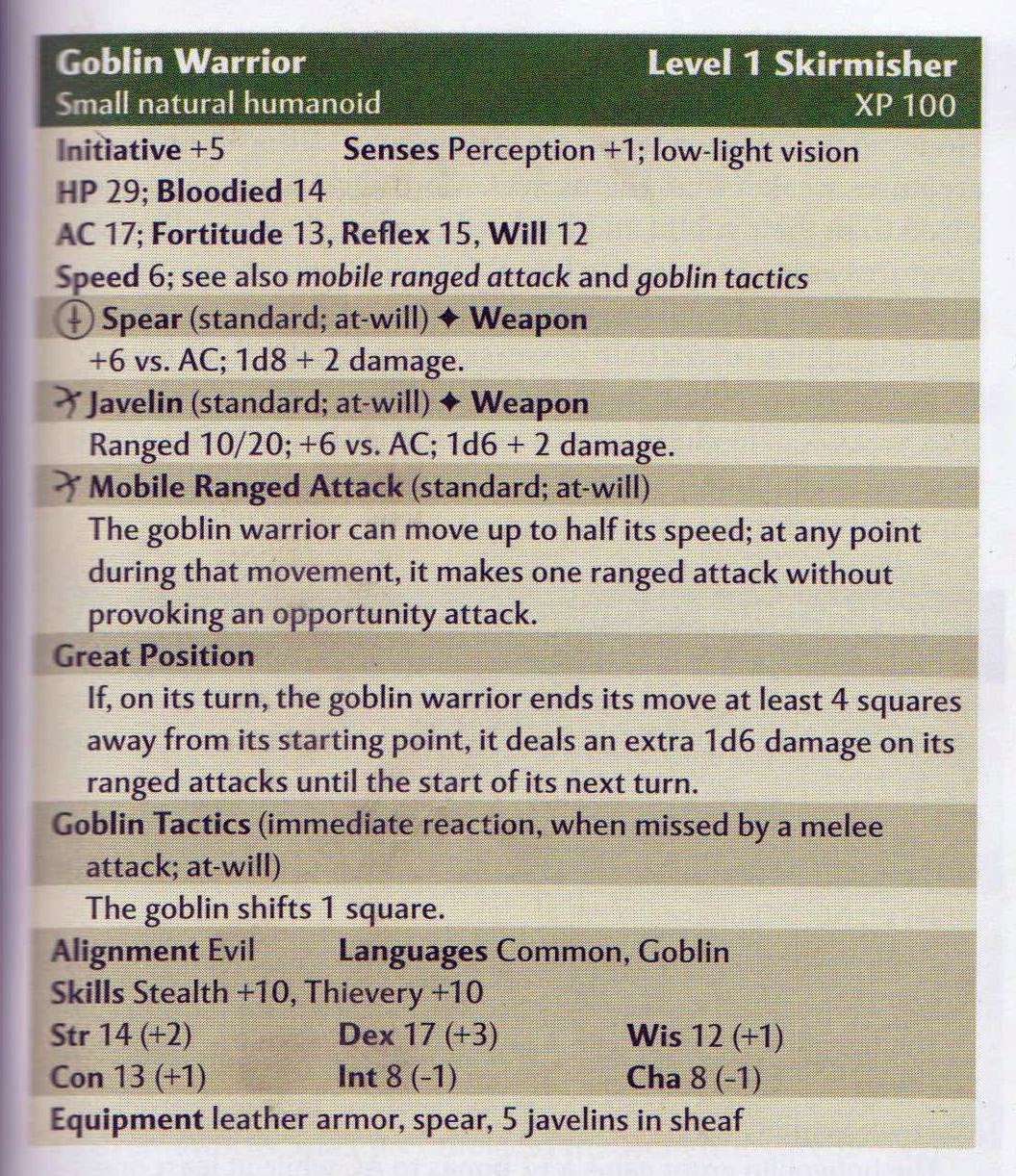 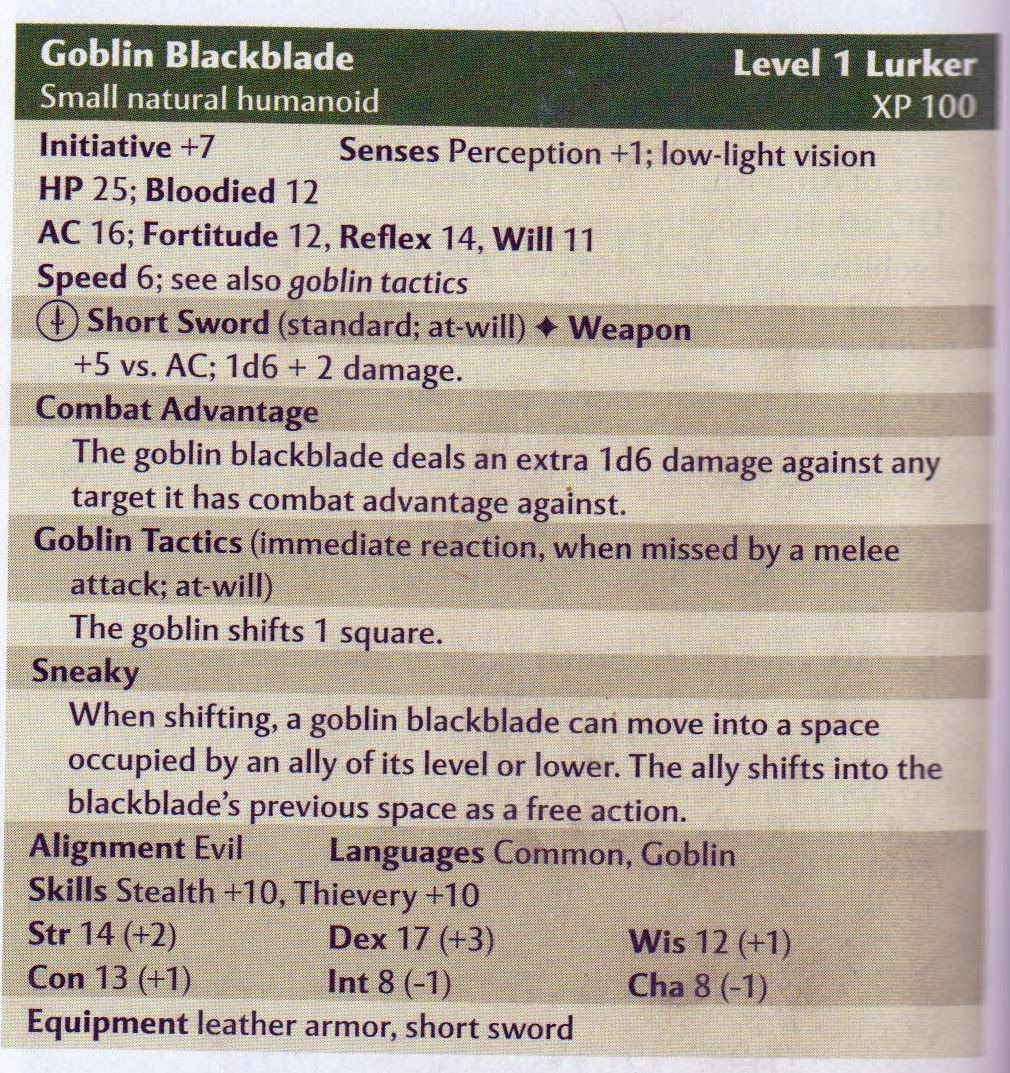 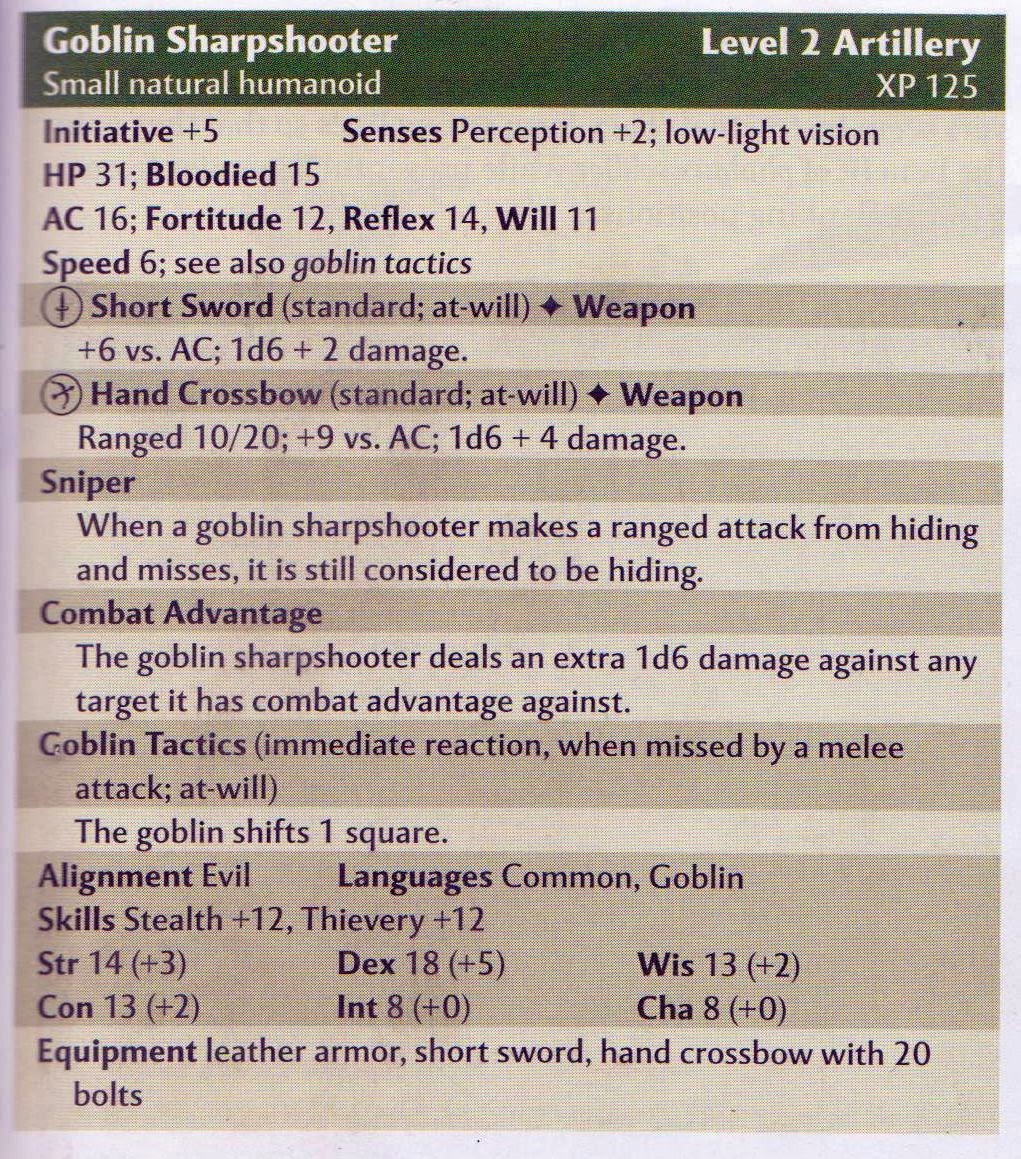 4E actually had six different types of goblins in the first Monster Manual so there are a lot of options when populating a goblin lair. I do see some carryover of theme with the better-than-average mobility of these things. The minion is probably the closest to the new version. The other 4E versions though add some sneak-attack type options and even more interesting movement abilities. I'd really like to see some options to liven up the monsters of 5th edition in a similar way.

In the end I'd call our first run "successful" but I don't know that it's going to bump our ongoing fantasy games. In the long run it has potential but right now it's just not quite there.
Posted by Blacksteel at 4:00 PM 3 comments: 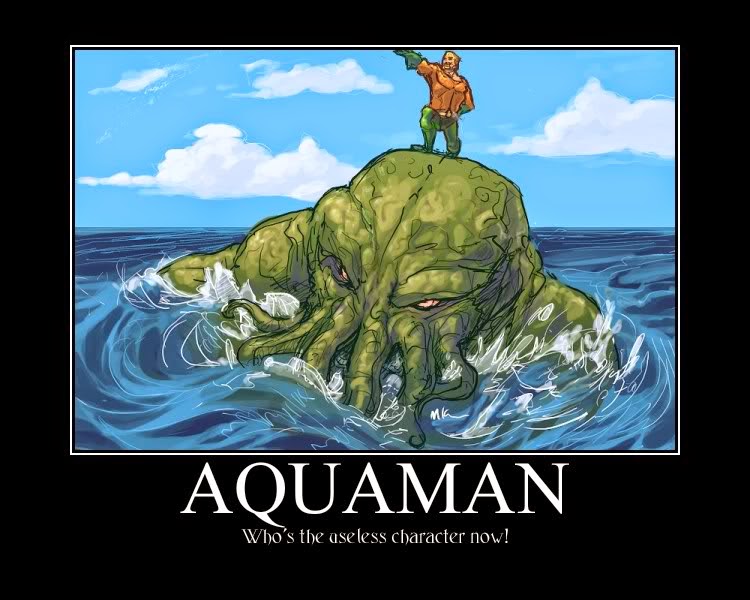