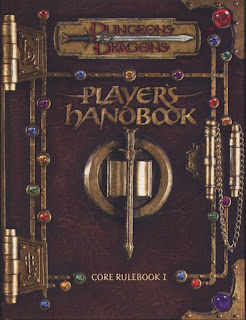 I ran a campaign in the Scarred Lands during 3rd Edition D&D and it was one of the best games I have run and had maybe the most memorable ending of all. Prior to this, in third edition, I had run:


After this it was time for something different, so we played a few other games then after about 6 months we came back to D&D 3E.


We started in May 2005 with six players - a Ranger, a Half-Orc Fighter, a Rogue, a Paladin, a Cleric, and a Dark Elf Wizard disguised as a High Elf. 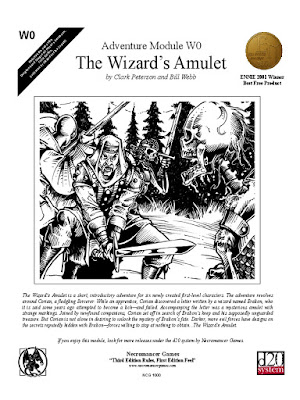 Sessions 1-3
The first adventure was "The Serpent Amphora" which was a free intro to the 3-module series set in the Scarred Lands. It took 3 sessions to work through and while it was pretty railroady (there were some fights you were definitely not supposed to win) it did start with a set of athletic contests during some holiday games that was a nice change from happenstance tavern meetings or other traditional D&D campaign kickoffs. I also worked in "The Wizard's Amulet" the first Necromancer Games adventure and that was well-received too. 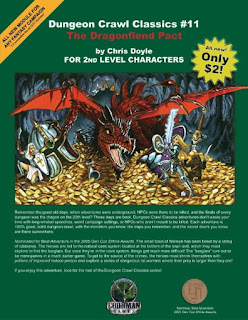 Session 4-6
The group decided to head north towards Vesh and along the way kicked off "The Dragonfiend Pact", a fun little Goodman games DCC adventure. 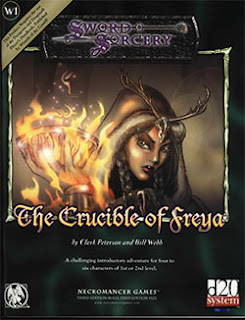 Session 7-8
Continuing northwards the party played through the Crucible of Freya set around east Onetenazu. This is another cool adventure and instead of starting in a keep on some borderlands you end up attacking a keep full of orcs ... on some borderlands. They had made it to 4th level by the time they finished this up. 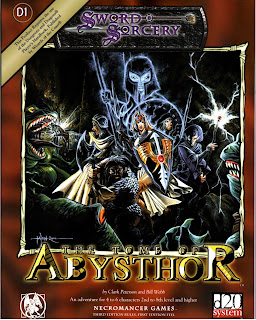 Session 9
The party then travelled through the Canyon of Souls to Amalthea and began exploring the Tomb of Abysthor. Actually this session was just the journey and exploring the shrines to Thyr and Muir between Amalthea and the burial halls that are the core of the adventure. 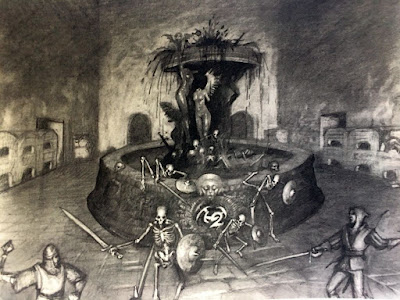 Session 10-11
These were spent exploring the first level of the Tomb and the interesting features like the Font of Bones!

This wrapped up 2005. We stayed pretty closely to an every-two-weeks schedule though we did miss one here and there. With six regular players one or two person's schedule issues did not derail a session - unless it was mine!

As the game went on I wrote up more and more details on Amalthea - it's condition after the Druid War, various organizations, facilities, and characters who lived in the ruined city. I had forgotten how much info I had on this city until I started looking back through my notes in preparation for the new 5E campaign but it's pretty extensive - probably the most I have done to detail an area since first edition. A lot of this is because there isn't much detail on Amalthea in the Ghelspad book and I wanted to give my players an interesting home base. It was a lot of fun and maybe the new campaign will make its way there at some point. 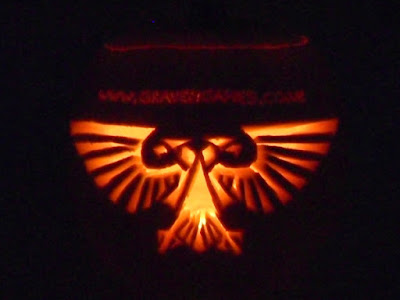 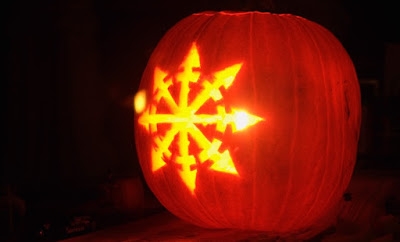 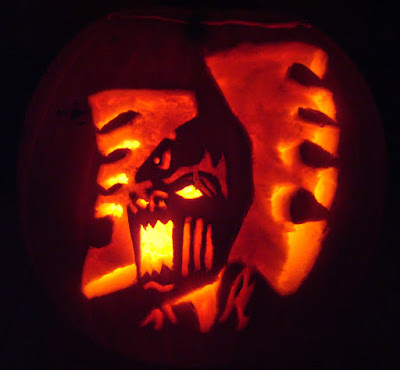 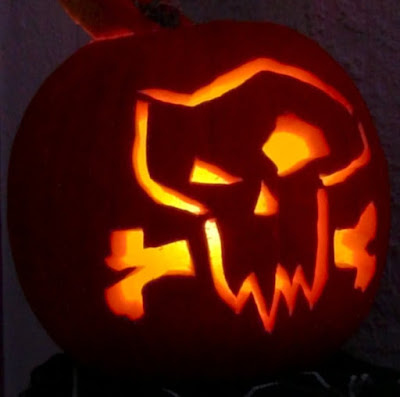 Happy Halloween!
Posted by Blacksteel at 5:00 PM No comments: 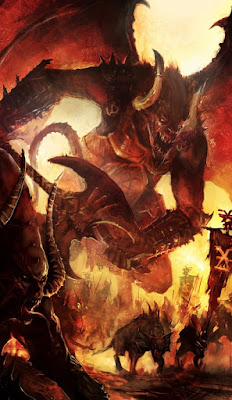 What's scarier than one greater daemon of Khorne? How about THREE GREATER DAEMONS OF KHORNE!

This whole thing started when I happened to notice that Apprentice Who's new Tyranid army was roughly 1000 points and 3 Bloodthirsters come out around 1000 points. I offered to have my three monsters fight his whole army and he accepted the challenge. Mine is a Supreme Command detachment while his is a Battalion so he will have 6 command points to my 4.


The setup: We had a mission with some objectives but they won't matter. It's the Swarmlord and his super friends vs. Khorne's Avengers! 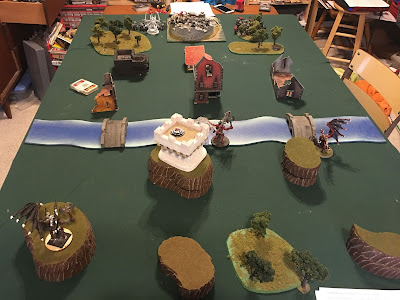 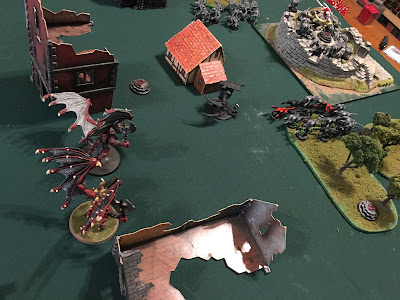 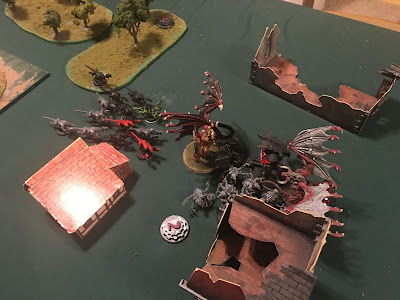 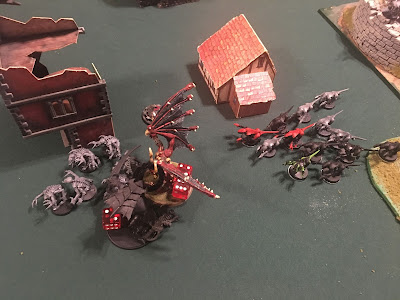 So the answer is that 3 Thirsters is probably not up to taking on another nasty HTH army all by themselves! I maybe should have ganged up on the Swarmload first and avoided the swarms of smaller creatures but I thought one BT could handle him! Clearly not! Also Smites are mean when you have no defense and no Smites of your own!

Anyway it was a fun game and didn't take all that long to play. We may do it again here with the new Imperial Guard using a tank army just to see how that goes.
Posted by Blacksteel at 12:00 PM No comments:

The RPG Update at the End of October 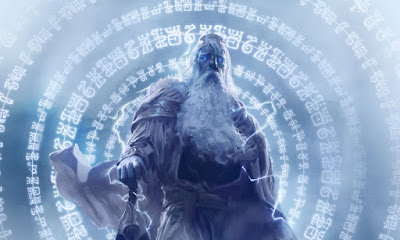 Since posting has been spotty this month I wanted to put together a general update for my own sake as we head into the holiday season of the year and collect my thoughts on where our games stand. 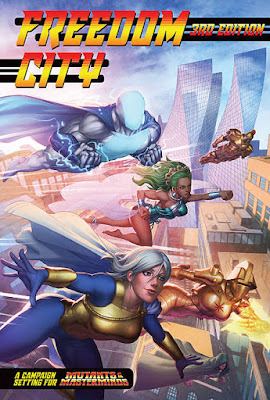 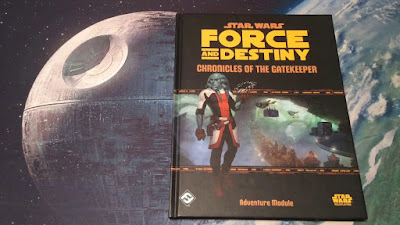 So there are the three main streams here. The rest: 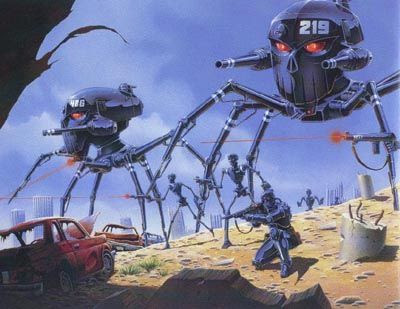 The Wild Card: Savage Rifts. We all want to play it, the question is do we want to skip something else to do it? Yes, I pretty much live in a world of Opportunity Cost when it comes to gaming time these days. I think the holiday breaks will give us a chance to try it so I am looking at putting together a one-shot or more likely (since we have to make characters too) a "two-shot" setup type session and short run to give us a taste of how it will work, and then maybe we work it into the rotation for next year.

Overall I am really happy with the way the games are going. Running it down like this I end up enumerating more  of what we aren't playing than what we are but that's because we've gotten to play a lot of different games over the last couple of years. I'd like to be more consistent or focused but this is how it has worked out and playing a wider variety of games is quite a bit of fun too.
Posted by Blacksteel at 12:00 PM No comments: