Based on what I read online, a lot of people build 40K armies for a single tournament or maybe a single edition, then sell them off and build another. That's not how I do it. Once I build and paint things I tend to get a little attached to them. Part of this is because it takes a lot of work before I'm satisfied with the look of them, and if I'm happy with it now I'll probably still be happy with it in a year or two or three. Another part is that they build up a history and sometimes take on a personality of their own. Keeping them at hand keeps me connected to that ridiculous game where every other model on the table died but my Chaplain and my friend's Eldar Avatar, so it came down to a one-on-one duel. Finally 40K is one area where I am not susceptible to the Greatness of the New - some of the new stuff is really good, but I don't have to replace my entire army with it right now.

So if you share my feelings on the subject, what are the differences in building and painting a long-term army? Here's how I do it, using my Crimson Fists (started back in 3rd edition circa 1998) as an example. I am reworking them a bit right now so it's an ongoing project.

First: The Origin - I went into the FLGS after 40k 3rd came out and found this in the discount bin 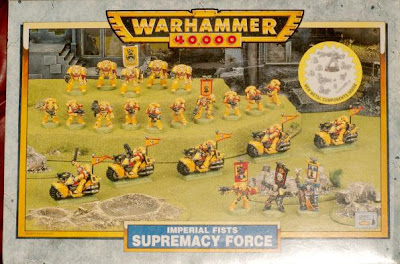 Now this was a special 2nd edition set that was pretty pricey - note that it contains more than the typical battleforce box does today, including custom shoulder pads and arm castings - but for some reason it was marked way down. Now I don't remember if the manager was uninformed or what but all of the 2E stuff was discounted like this but this was just a box of miniatures, rather edition-independent. I jumped on the opportunity and this box is still the core of my army today.

With all of the fist-symbols in the set I really wanted to use them but my Howling Griffons were already yellow and red, a little too close to the Imperial Fist color scheme, so I went with Crimson Fists, partly for inspiration from the Rogue Trader cover, and partly because I knew it would be a fairly simple scheme to paint and thus would be faster. 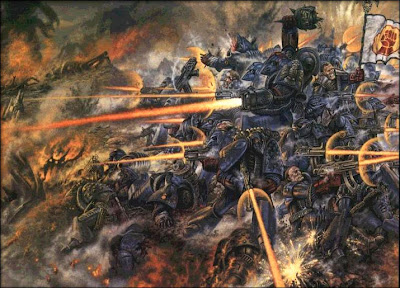 Now with any army there are some universal basics on getting started, and the primary one is "HQ + 2 Troops". You will see it everywhere because it's true. Since the introduction of the force organization system in 3rd edition it has been a good idea to follow this. Look around the web at images and tactics articles if you like but to get started you need those three pieces. For marines this usually means a Captain and two tactical squads, probably with flamer and missile launcher. Get them, build them, play a game or three with them against a friend. Make sure you like the game and the army before you commit to them. For Orks it's at least 20 Orks and a Warboss, though more is better. For Eldar it's a Farseer and some Guardians or Dire Avengers.

The Starter Sets are usually a good deal although the current one (Dark Vengeance) is much more specialized than older sets with chapter-specific markings on the included Dark Angel marines and some odd choices for the included Chaos force. This set is great if you're wanting to play Dark Angel Space Marines. If you can find the 5th edition set, Assault on Black Reach, it's much more generic with Marines and Orks that can be used for a lot of different armies.

I'm not a huge fan of the Battleforces because a lot of them don't give you a great mix of forces. A lot of them are a full squad of something, a half-squad of something else, and a single vehicle. Look carefully at what your set contains and think about how useful that's really going to be. A 5-man scout squad may be fine, especially with sniper rifles. A 5-man marine assault squad is not something you are going to use very much at any point level. Based on that picture at the top I would try to build it out as 2 tactical squads + scout squad, and save the jump packs for later.


Now if you do go online you will see a lot of statements about how troop units are dead weight in some armies - ignore those for now. Troops are the core of your force and you will be taking two of them in every battle you fight. Start with two and you're covered right from the start. Remember, you have to take objectives to win in most current scenarios, so troop choices are actually more important in the current edition than they have been previously. Marines have an advantage here with the combat squad rule that lets you turn 2 tac squads into 4 scoring units - this is a good thing.

Now after fighting a couple of battles this limited force may feel a little too ... limited. Now it's time to pick up some new fun stuff:


Two things to keep in mind as you expand:
That's all for now, more to come as I progress with the updating of the Fists!
Posted by Blacksteel at 12:00 PM 2 comments: 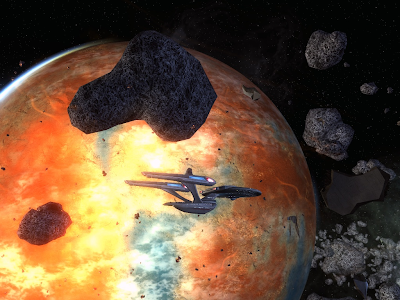 As a follow up to yesterday's post I thought I would point out that there are options and resources out there beyond just fantasy and superheroes. I've been getting back into Star Trek Online, working my way back up through the levels, and there is a ton of useful material there.

In contrast to some of yesterday's examples where the setting was the attraction, that is not the case here - it's Trek! Even a casual fan of the movies or shows is already going to know a lot about the setting. Now the era of the game specifically is interesting - it's about 30 years after Nemesis - but it's not terribly different from any other Trek era. It's basically a Next generation era game with Ferengi, Borg, Klingon Honor, and the Tal Shiar all running around. 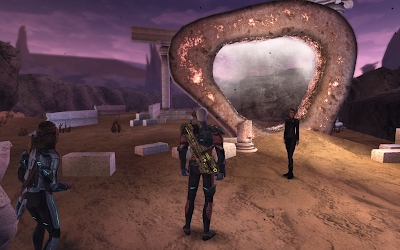 The best material here is the missions themselves. A lot of fantasy games focus on dungeons and combat, MMO or tabletop, so the "things you do" are largely familiar activities. Star Trek can be quite different in the details - space encounters, ground combat, diplomacy, exploration, first contact - any of these could be the focus of an adventure and many will involve several of them. STO's basic mission structure tends to be: 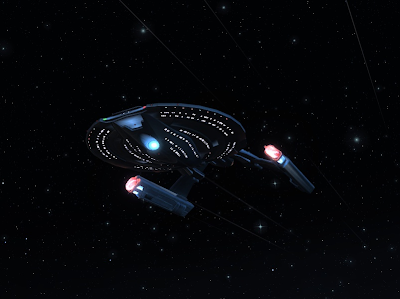 Now there are missions that deviate from this outline but that's a pretty good summary of some of the TV episodes too. This kind of structure can be useful if you're running or planning a Trek session and need an idea of how to "build" it. Start with this, then as you become more comfortable, you can start making changes as you see fit. There are also longer story arcs in STO that take multiple missions to play through, also a good guide for a new Trek GM. They usually look something like this:

Some of it is more routine star fleet stuff but there is also the more exotic stuff: time travel, aliens from other dimensions, secret genetic manipulation - and the STO missions can give you an idea on how to introduce and structure those as well. 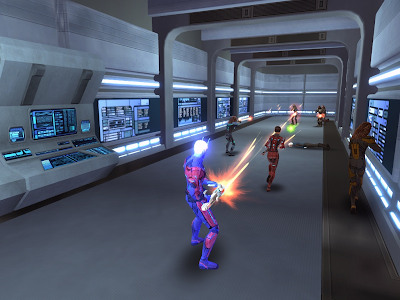 FInally, even if you have a head (or a notebook) full of ideas and know how you want to run them, it is a nice source of images. We do have many hours of TV and many hours of movies to draw on, but another, more customizable source of images is a nice thing to have when running your own game. There is some Original Series stuff, from ships to races to uniforms, but a TNG era game will find the most utility here. The space stuff is particularly good. It does have a character creator with uniform options and very customizable body and facial details. That part is a little bit cartoony but it's not terrible. Beyond screenshots one could also make some nice "opening sequences" with a demo record to kick off new adventures too. Add your own music and you have a pretty slick production of your own. 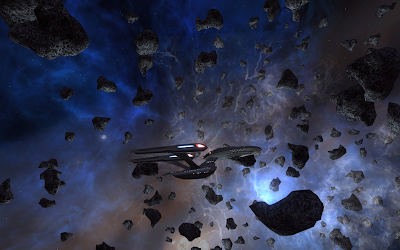 That's about all I have to say on this, but I will note that a)  it's another useful tool in the DM toolkit and b) it's free! If you're at all interested and if you've considered running a Trek game but weren't sure how you would sustain it past that initial idea in your head, well, take a look. It may open that right up for you.
Posted by Blacksteel at 12:00 PM 3 comments: 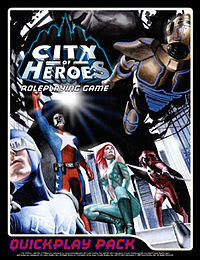 It's been six months now since City of Heroes was shut down, and I've started exploring some of the other MMO RPG's out there, old and new. I doubt any of them will have as big an impact on me as that game did but I thought I ought to take a look at them at least. I found CoH great both as a game itself and as inspiration for some of my tabletop RPG's, and diving back in has me thinking about the idea in general.

Now when it came to cross-pollination CoH was more about setting: the individual missions were fairly simple most of the time, but the setting was great. A big sprawling city full of heroes and villains with its own history and enemy groups and internal problems - there's a lot there to mine for ideas for my own home game. Some of the group-oriented task forces could make for a good adventure idea, but most of the inspiration was less tactical and more strategic. After all, part of the fun is posing the problem and then seeing what your own group of players does to resolve it - quite often MMO type games have an assumed solution and the trick is to find it. With a tabletop game you can allow for far more diversity in approach and in solutions. 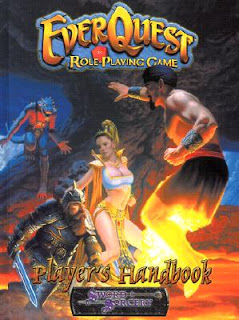 Beyond this particular game there are a bunch of fantasy MMO RPG's out there that could serve as inspiration too. I talked about using the Ultima (offline) games as inspiration here and I'd still like to give that a try sometime. Everquest and World of Warcraft are the big dogs here. There were tabletop RPG's published for both a few years ago. I don't own them but I assume they have some value if you're looking for RPG inspiration, even if you don't run the actual game. I would probably pick a game I already liked though and use the MMO material as inspiration rather than hard mechanics.

I do like the idea of mining them for material though, especially if you're stuck for a campaign idea. There's a ton of lore, NPC's, monsters, and geography just waiting to be used. Now this assumes that the DM is probably a dedicated player of the game, or was at some point, but if you are/were why not put that knowledge to good use? Plus, a tabletop game gives you the chance to explore outside the constraints of the game engine, which could give familiar material a brand new feel once you dig in. 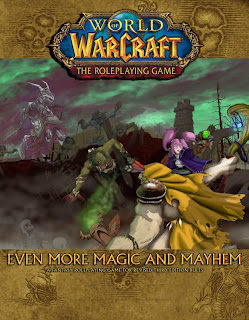 
With so many online RPG's going free to play I think they are worth a look, both as games themselves and as inspiration and resources to fuel your "real" game. Take a look - you may find yet another tool to add to your DM toolbox. 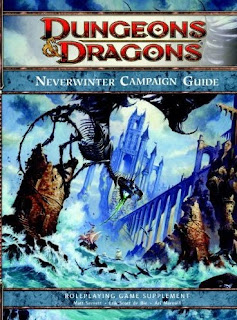 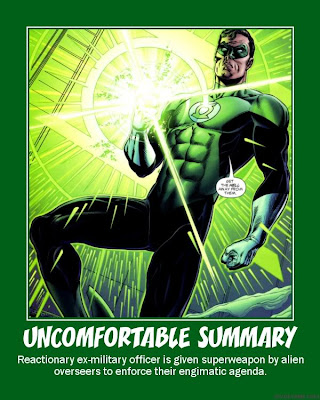