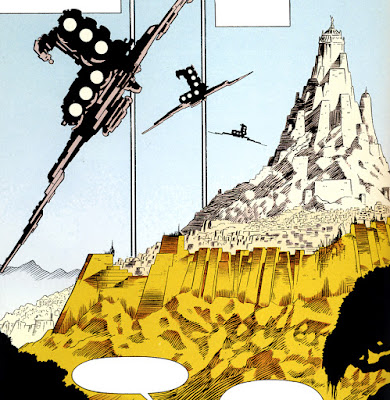 One of the things I've been doing during this quarantine extra-downtime thing is going back through some books and movies and comic books that I haven't touched in a long time. last week it was "Tales of the Jedi" - the first one. Reading through it pushed the "that's a cool idea" button pretty hard so I thought I would share it in this post.

The Premise:
Onderon is a world in the Star Wars universe. It was once a peaceful, idyllic planet populated by simple tribesman. It's moon, however, was basically a 40K deathworld full of savage monsters. At a certain time of year, the atmospheres of these two would touch, and some creatures from the moon (mainly flyers in the book) managed to navigate from the moon to the planet. This went about how you would expect.

The tribesmen were unprepared and had to learn to fight giant flying predators, developing skills and technology - like hunting with bows - just to survive. Over time they were slowly driven together to the point they ended up in one great city where they walled up, built other defenses, and held their own. So you have one huge heavily defended city full of humans, and the rest of the planet is a monster-infested forest-jungle waiting to eat anyone who steps outside.

As they became more civilized there were inevitably people who just could not get along. Criminals were exiled out of the city and early on this was pretty much a death sentence. Some survived though and as the smartest and toughest of a rough bunch they eventually started to build their own society. One of the interesting developments is that they started capturing and taming some of those monsters. So now we have the big defended civilized city while outside the walls we still have a bunch of monsters but we also have the "beast-riders" of Onderon - barbaric types who survive at a lower level of technology with the help of their tamed beasts ... and yes, a lot of them hate the city and its people. 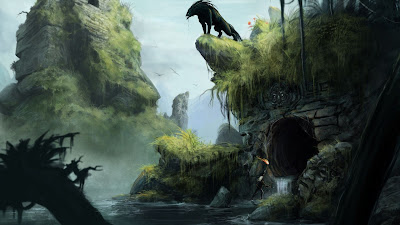 Ripping it off for an RPG campaign:
So ... I'm sure a lot of you who have run games can see the potential here, and it doesn't have to be Star Wars or any kind of Science Fiction game at all! This works just fine as a the setup for a fantasy campaign. The city could be a center of arcane/academic type magic while the beast riders are more of a center of nature/innate magic. The obvious conflict is between the city and the exiles but there could easily be inter-tribal conflicts ... and what if some of those "monsters" are intelligent too?

I can't help but think the writers were familiar with the Dragonriders of Pern books - with nasty stuff dropping out of the sky when the moon gets too close - so we could borrow a premise from those two and say the wider planet used to be inhabited by a more advanced society, maybe some fantasy kingdoms and empires, so there are interesting things to be discovered out in the wilderness.

To start the action we could steal a premise from Fallout and say some vital, ancient device in the city is failing and someone has to venture outside to find a replacement.

Let's mix them up and say that a person is responsible for energizing the lightning field that protects the city when it's attacked and they are dying or dead and someone has to journey to the ancient temple outside the city to become the new wielder of the lightning.

To me, finding a good reason to leave the city is the key to starting the campaign. We have an interesting situation, but we need a reason for the characters to move around. A lot of this depends on your players: 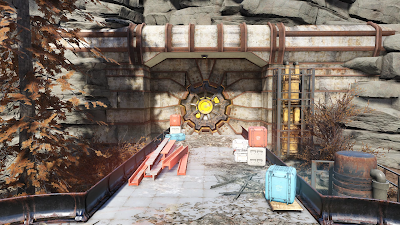 Long term ... well if you stay more with the original concept that the monsters originally came /are still coming from the moon ... well, someone has to go there at some point right? Once you've explored everything/built an empire/united the tribes/saved the city/rescued all the princesses/hit 20th level ... I mean, that's where you go, right?! The situation implies some kind of manipulation to have a moon passing that close to a planet yet somehow remaining stable and separate ... there's clearly some kind of technology or magic or deity at work - and PC's can't just leave that kind of thing alone. So there's the capstone to your campaign - To The MOON! 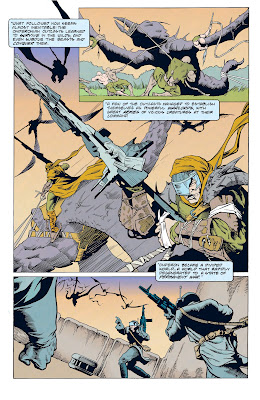 Anyway I can see a ton of ways to use this concept in an RPG. There's incentive for traditional D&D type loot-questing, there's plenty of room for empire-building, and there is opportunity for role-playing everything from personal relationships to political maneuverings and Star Trek-style diplomacy between rival groups.

Let me know what you think.
Posted by Blacksteel at 12:00 PM No comments: