Arriving at the caves our neophyte heroes (The thief is 2nd level, all others are 1st) examine the situation, looking at the terrain and the different caves visible from the entrance to the canyon. They decide to head for one of the lower cave mouths nearby.

As they approach,  they see what looks like a large sleeping bear inside.  Apollo the Elf shoots it with his bow bu it does not awaken. As the group enters the cave to get a closer look, a mighty bellow startles them as an ogre steps into view from the other side of the cave and attacks! Blows are exchanged with the ogre whiffing a lot and the party inflicting some harm until the brute lands a mighty blow on Thaddeus, crushing him to the ground and slaying him instantly. Enraged the remaining heroes redouble their efforts and the mighty ogre crashes to the ground. Being trained adventurers the party loots both bodies before burying the fighter in the woods nearby. Stunned at the loss of one of their toughest comrades, they decide to press on anyway and explore another cave.

This cave shows signs of activity but the group moves down a passage without encountering anything until they walk into a room with 6 goblins ready for battle! A fight ensues and Horus and Apollo are both injured badly before all of the goblins are slain. The team loots what they can then hurries out of the cave, binds up their wounds, and heads back to the Keep to recover and recruit a new fighter.

DM Notes: This session went well for the most part though there was a stunned look on one face when the fighter took a 10-point hit from the Ogre and went from fine to dead in one shot. Low level combat is brutal,and against big creatures it's worse, and that's not unique to this edition of D&D - it was a problem all they way through 3rd, though it's mitigated somewhat in 4th.  Ogres hit hard, period. Naturally that had to be the first cave they entered...

They are somewhat skittish and that's probably a good state for low level characters and inexperienced players to be in. They are quite prepared to head all the way back to the keep after a fight in order to keep from dying though lately there has been more talk of camping somewhere nearby. They are keeping track of torches, arrows, daggers, and oil expended like old pros and it does make me smile. They are quite anxious to get to 2nd level as they see that it will make a big difference to their survivability.

Characterwise it's looking pretty familiar - the elf uses a sword and shield and sometimes a bow so he can easily have one hand free for spellcasting. The dwarf is usually in front and has converted from battle axe to sword and shield to up his AC. The fighter was a Two-Handed Sword user and was typically the other frontline combatant - we use 5' squares on the battlemat so it's 2 PC's per rank in those 10' wide corridors. The cleric stays in the 2nd rank with the Elf and uses shield and warhammer. The thief stays at the back and shoots a bow - he has no interest in backstabbing just yet - while the magic user has turned into a dagger-throwing machine and is very careful to collect them after a battle, if he can. At this time I believe he is carrying 11 of them, plus a magical one that he does not throw.

Things I learned: Those goblins are very connected. They have deals with the ogre to help fight off intruders and with the hobgoblins too. Unfortunately for them the ogre is already dead, but I can see a terrible cascade if a party does this in a different order and has to fight the goblins, some hobgoblins, and an ogre all at once - nasty.

Posted by Blacksteel at 12:49 PM No comments: 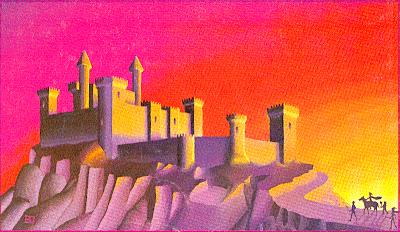 After a long break we discover that our party of novice adventurers has moved north and west to Falcon Keep, located on the borders of human-dominated lands near the Kingdom of the Iron Crown. Our heroes are:

We begin as they approach the keep and are learning a bit of background on the area from the merchant they are traveling with to the Keep. At the front gate they are asked to state their names and their business, after which they are admitted to the interior of the fort.

Inside they arrange for rooms and supplies and inquire about horses. They pick up a few rumors from traders and in the tavern then settle in for the night. The next morning the heroes head out for the local tourist attraction known as the Caves of Chaos.

Taking a shortcut through the woods (instead of taking the road) they begin to encounter webs, become more and more dense as they move deeper into the forest. Pressing on they encounter 3 giant (large) spiders and quickly dispatch them. They then push forward and soon come upon the Caves of Chaos.

I know this doesn't seem like a lot but this took two hours of getting back in the groove time - looking for characters, picking out mini's, hearing the background of the region, refreshing a bit on the combat rules and just generally getting back into the game, even for me. Also, the Apprentices have become a bit argumentative during their time together this summer and this will show up more in subsequent session reports. However, this was the restart session and it was good.

Quote of the night: (after being told the party was approaching the Keep) "Shouldn't we get to decide where our characters go?" DM Repsonse: "Later, yes, right now, no." They said they were done with the starter dungeon...

Posted by Blacksteel at 12:39 PM No comments: 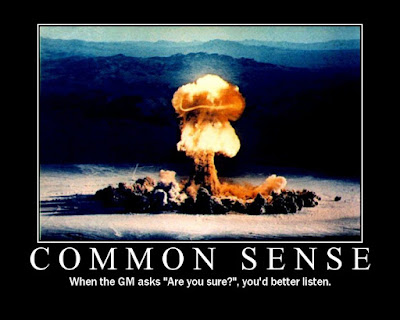 This is something new I want to do - I love so many of the new-style motivational posters that are out on the Internet that I wanted to share a few of them here so this will be a regular Monday thing.

Up next - the return of the Red Book campaign!

Posted by Blacksteel at 12:12 PM No comments: