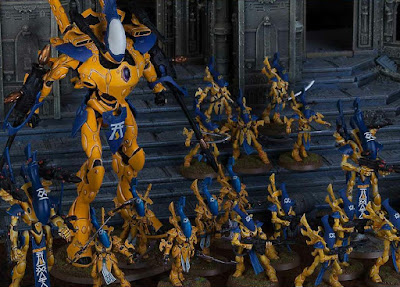 I started this Eldar ramp-up late last year after puttering around with it two years ago. This time I stuck to it, focusing heavily on the Eldar in acquisition, painting, and playing this year. I'm not quite finished with them yet but I have a pretty solid set of pieces to use.


Reserves: a falcon, multiple wraithlords, a wraithguard squad, rangers, a war walker squadron, couple of farseers, and a vyper squadron. Some are painted, some are not. Most of these would end up as part of a CAD using some of the dire avengers as a core instead of the larger DA shrine.

Expansion: Not much! I could use a few more wave serpents. I might pick up a flyer to provide some air cover. I might pick up a couple more falcons as I am fascinated by the idea of deep-striking tanks full of troops. A second wraithknight is likely at some point - more as an option than as part of a plan to field two of the things.

Ruled Out: This will never be a jet bike army. The closest I will get to that is the vyper squadron and anyone playing them in the last few years knows that vypers are not exactly feared on the tabletop.


Undecided: I have around 40 guardians, support weapons, and some warlocks. I am not sure if I want to make them part of the force and go full guardian host + add-ons. It is a potent force to have but I am not sure I am ever going to want to take a bunch of guardians over the units I have already completed. I used to think of them as essential to any "real" eldar army but I've loosened up on that in recent years.

They are also entirely unpainted so it's going to be a fair amount of work to get them ready. I do still have some inclination to make the old alien eldar into a fieldable force so I might go that direction. None of this is really a priority though. TBD in 2017 is what I would call it for now.

Next week: Think it's time for some pictures!
Posted by Blacksteel at 12:00 PM No comments:

We have a session coming up where one of the usual Pathfinder players won' t be able to make it but Apprentice Who will be available. Since we won;t be able to run Pathfinder, I asked them what they'd like to do instead. My players actually said "what do you want to run?" 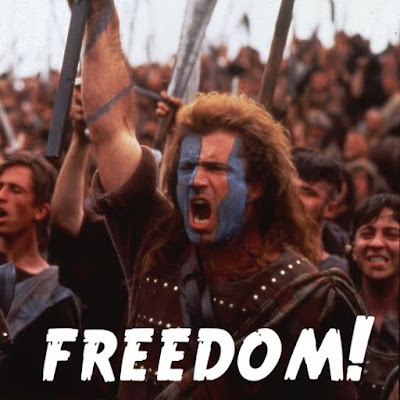 So, a limited run (with the holidays approaching) or a one-off session? Alright!

Leading candidates right now are beginning another chapter in our Marvel Heroic campaign or giving FFG Star Wars another try with a slightly different group than last time.

Luke Cage! Not a ton of memes but still some funny stuff: 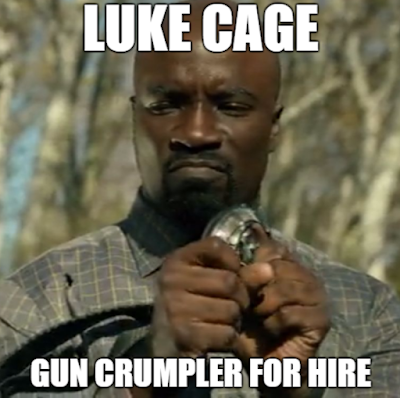 The guys at "Texts from Superheros" are pretty good at this kind of thing: 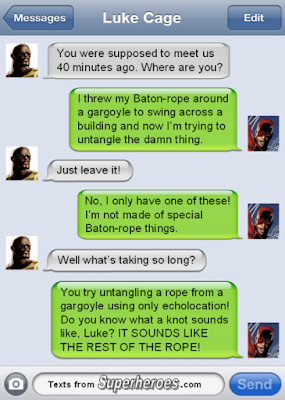 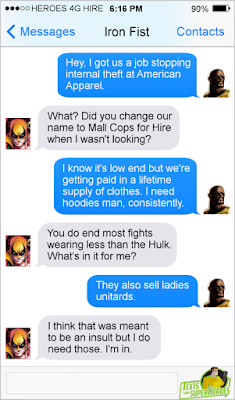 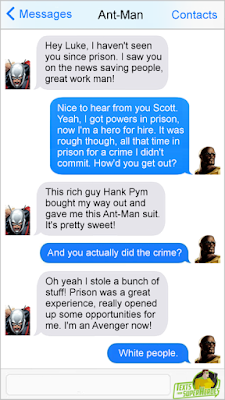