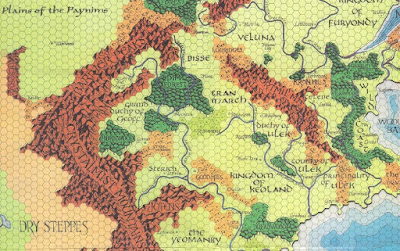 So I finally started a 5th edition campaign a while back and I went for an old school approach: we rolled up characters with 4d6 drop the lowest, we used old school styled character sheets, I set it in Greyhawk, and we started with The Keep on the Borderlands placed on the frontiers of the Kingdom of Keoland. I've run several sessions and it's all good but ...

When some of the players from that group were not available and really wanted to play through the rest of the adventure, my solution was to start a completely different 5E game set in the Forgotten Realms and using a completely new school approach - point buy, new style sheets, 5E published adventure book, bringing in a new and very young player, and set in the 5E Realms - as opposed to the 4E Spellplague Realms, the 3E Realms, the 2E Time of Troubles Relams, or the original recipe 1E Realms. I've run a couple of good sessions here and we are having a blast. 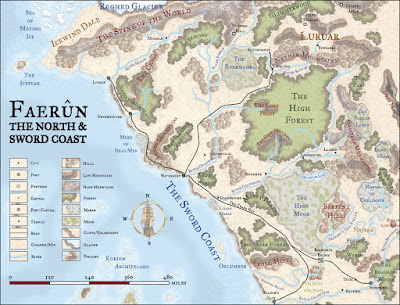 This coming weekend we're looking at another session of the Old School campaign due to player availability and a few things occurred to me.

First, I wasn't really looking to run two D&D games, yet once again I've somehow found myself in that position. It's a nice problem to have but it's somewhat ironic that with all the games I'd like to run I end up running two of the same game at roughly the same time.

Second, having them in two separate settings means more overhead for me and the players as far as NPC's, nations, gods, assumptions, etc.

Third, if I put them in the same setting it opens up the possibility of crossovers of both players and characters which could be a lot of fun and very helpful as both campaigns proceed.

Given that, it makes some sense to retcon the old school game into the Realms. I really like the region where Storm King's Thunder is set and I am diving in full-on in researching it and gathering material, but I would prefer to set the other game somewhere else so they're not stepping on each other and so we can explore a different part of the Realms. I need a somewhat organized kingdom .. how about Cormyr? Far enough away that it would feel like it's own thing but still on the same continent and connected to the main region I want to use anyway. 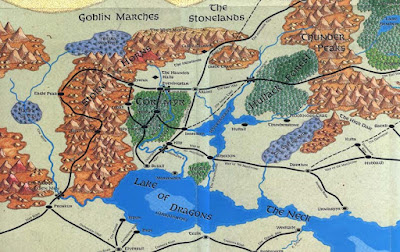 So I was all set to do this when I started to have some second thoughts. The whole point of the original campaign was to do some "old school" adventuring using the 5E system. There are a lot of old adventures that I really like and that  my players have never experienced. I want to work those in along with some homebrew stuff. I'm worried that moving the game to the Realms will lose some of that feel. Most of the old 1E adventures have a location in Greyhawk and while it wouldn't be hard to place them in Faerun I myself first encountered them in Greyhawk and that's what feels the most "old school" to me. The thing is I'm not that excited about Greyhawk on it's own at the moment - I mainly chose it because it's the first place I think of when I think of these adventures, not so much because I think the world itself is something I want to explore right now.  My players don't really know enough about the old modules or either world to have a strong opinion so this is a problem mainly in my own head.

Now I could go in a completely different direction and retcon it into my homebrew old-school setting that I put together a few years back for our Basic campaign. I had a lot of the old D&D/AD&D modules in mind for that game anyway. A homebrew setting would be the oldest of old school approaches and it trades "research" for "creation" which may be more satisfying in the long run anyway.

As a plan C or D, well, the Scarred Lands have come up a few times as one some of my players (and I) remember fondly from our 3E campaigns and I've been thinking about how we could work it in to the rotation at some point. It's an interesting mix of old school and some newer concepts and I would really like to take my players into that world again. I mostly ran some Goodman Games and Necromancer Games adventures there and I have some that I never ran that would be fun in 5E as well. There would be a lot of adaptation so it still scratches the creative itch. 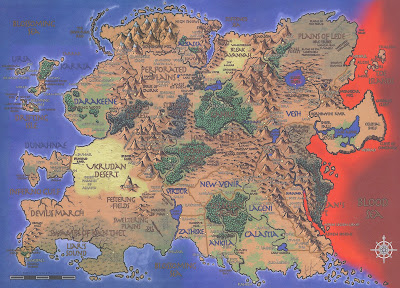 After thinking through it here I may reserve Greyhawk for another run down the road, maybe original flavor Temple of Elemental Evil. I think I like the Realms/Homebrew/Scarred Lands options more than GH right now. I have to decide whether the advantages of using one setting for both games is worth giving up separation to protect that old-school feel and that may take a little more thinking. Nailing down which adventures I want to run in the "Classics" campaign would probably help. Even there though I am not driving a metaplot here- a lot of it will be up to the players.

So anyway there's one DM thinking out loud and trying to find a good answer to this. If you have any thoughts, please feel free to share.
Posted by Blacksteel at 12:00 PM No comments: