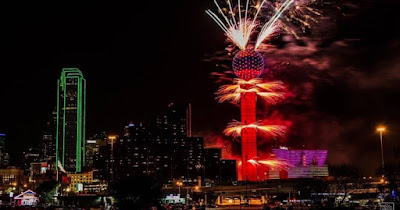 2021 was not a bad year here. Personal and family stuff was good and that's about all you can ask for these days. Hobby-wise ...

Looking back I don't think I ran any other RPGs this year, even one-shots. That's pretty light for me. I suppose I should look at it as maintaining focus at a higher level than usual but it still feels a little weird. I certainly added enough new ones to the pile and of course there are ideas for way too many campaigns buzzing around my head but my players are happy with what we are doing so I feel like I'm doing something right. 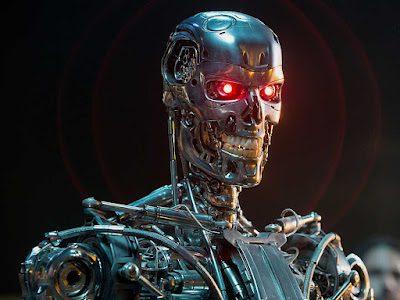 Miniatures-wise we played a reasonable level of 40K and I got a -lot- of painting done so that feels like a total win too. Close to wrapping up the Necrons and I am very happy with that. Simple paint scheme, as terminator-ish a look as I can give them. It's pretty much silver/chrome, red eyes and gun parts, and desert type basing. I won't quite finish them by the end of the year ... errr ... tonight ... but some of that is due to weather as you can't spray that final clearcoat if it's too cold, or too wet, or too windy and we will cover all 3 of those this week. 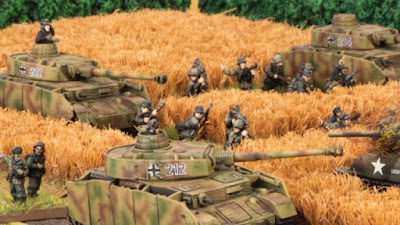 I did dive into Flames of War early in the year as this year's "miniatures game I will dive into hard and end up not playing" ... which is exactly what happened. At some point you might think I would learn but hope springs eternal. A few years ago it was Bolt Action, then it was Star Wars Armada (though we did play a few games of both) then Age of Sigmar ... I have played enough Kings of War that I don't count it as a non-starter but it was quiet this year too. Check in tomorrow for next year's candidates!

I did work on building an Undead army for Kings of War ... and also for Sigmar as that book came out while I was feeling it and so progress was made but not completed on both. I held off on 3rd edition AoS as we haven't played since 1st and I'm trying to be better about throwing resources at rulebooks I may not use. Armies - sure. We can play a few games with the old rules if we can get some armies together and make sure it's something we want to expand.
Overall the miniatures situation is better then last year. I got a lot done and I also took the time to reorganize my work space  - cleaned out the workbench completely, picked up some new drawer/organizer things, and went through a bunch of paints and tools and supplies and got rid of a lot of clutter. I've enjoyed it more the last few months than I have in quite a while so I'm calling that a win. 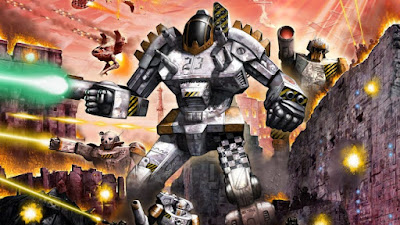 Then, last week of the year, the big surprise - we ended up playing Battletech of all things. We haven't played BT since the boys got interested years ago so I decided to go back to the original source and we played with the original BT boxed set, mechs, and map. This all came about because Paladin Steve's oldest son was asking about the 40K miniatures again when he was over for our boardgame night and rather than try to explain all that we started talking about how if he want to have giant robots moving around and punching and shooting each other Battletech was a better bet than 40k. It's also cheaper to get into if he really liked it. Paladin Steve hadn't played in 20 years but he was interested in dusting it off - so that's what we did. One mech apiece ... 3025 tech ... one original map board and we ran for several hours. It was a lot more fun than I expected - even when my Wolverine went down to a punch in the face that crushed my cockpit. 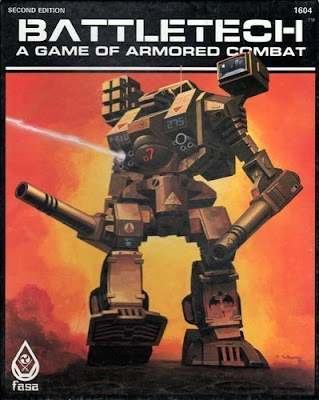 Going through all of that old material hit me with a pretty heavy nostalgia wave. All those custom mech sheets, some sheets that still have damaged marked on them from battles 25 years ago, and even re-discovering old Mechwarrior character sheets ... we spent a LOT of time playing Battletech in the 80's and 90's. I have a ton of painted BT miniatures some of which I painted back in the 80's and it always feels good to put those on the table again.
It was a ton of fun and Apprentice Boom Gun was already asking when we could play again before we finished the first game. That's a good sign. It was a nice way to wrap up the gaming year.
Posted by Blacksteel at 10:03 PM No comments: 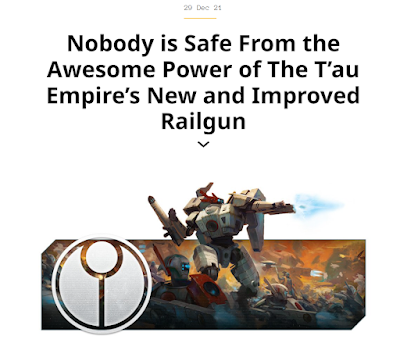 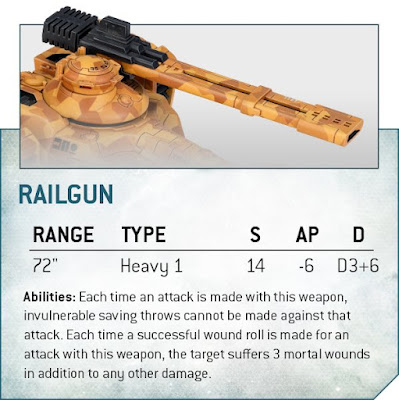 Nice. But what if you're fighting a horde army? 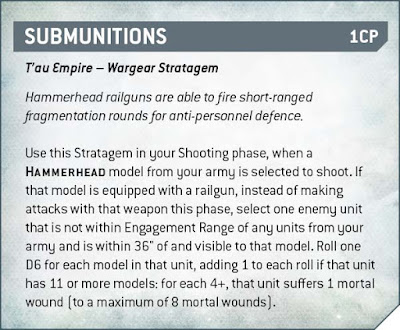 Ah, well ... covers all the bases then doesn't it? I mean it hurts big targets, ignores invuln saves, gets a re-roll, causes automatic mortals, and has an option to do mortals to big groups. This is what a "big gun" in 40k -should- look like.

It does raise a question though - can we get some upgrades for some other lackluster "big guns" in the game? Necron Doomsday Arks wish they were in this ballpark. So does the Leman Russ Vanquisher which has been getting progressively worse as the "tank killer" cannon in every new edition of the game. The recent leaks show the Eldar big guns improving so I don't think they're feeling as left behind but there are definitely some holes out there. Here I am finishing up Necrons ... the oldest, most powerful race in the lore ... and they have nothing as good as just slinging a solid metal slug at something at a very high rate of speed.

The best way to make a single or very limited shot gun feel better in play is to give it some reliability - nothing feels worse than to have your big gun fire and roll a 2 with its 3+ chance to hit. They've done a LOT of that here. Multi-meltas went to two shots this edition and that has made them much more interesting. Missile launchers only have the one shot with krak missiles but they have the frag option so there is some flexibility. Plasma Cannons get d3 shots with blast boosting them against hordes. Lascannons are feeling a bit down this edition I think because of the only-one-shot statline and only 1d6 damage. If it's going to stay at one shot then it would be nice if there was some kind of bonus or re-roll on that damage so that you get more out of it. Doesn't have to be the d3+3 of the Eldar lance weapons but some kind of boost would be nice. 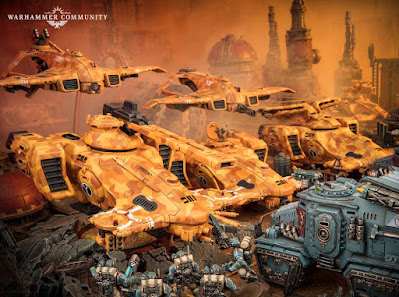 I do like that they are exploring the design space more when it comes to the numbers and also that they are trying to make different weapons actually feel different. I don't like the spreading out of the "can only be wounded on a 4+" type mechanics or the "can only take x wounds per phase" silliness so I'd like to see more innovation on the defensive side but at least they are trying on the offensive side.

I always thought the Hammerhead was one of the coolest looking tanks in 40k - now we might finally see them on the table again.

Anyway, today's info on the Tau - which I do not play - have me feeling pretty positive about the upcoming Eldar codex - which I do. A lot. 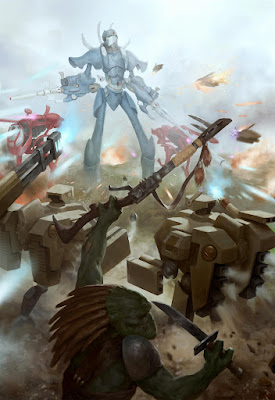 Posted by Blacksteel at 9:46 AM No comments: