A Deliberate Embrace of Savage Worlds

One of the major issues with RPGs is that it can take a lot of time to play one. Most of my campaigns have run on a weekly to biweekly schedule with roughly six hour sessions as the plan. This worked well enough until 4E became the main game and it became tough to get through more than 2 combat encounters in a session. Now in general it's worth it if you want a very tactical flavor to your combat but it definitely slows down what you can do in each session if you're used to things moving somewhat faster. This also ruled it out as weeknight game as even a 6-10pm session is really only going to allow for one to two fights maybe, at least the way we played.

Now with jobs and kids a weeknight game is hard to do anyway so this wasn't a huge loss but when the kids want to play something on a weeknight, well, 4E is probably not my first choice. Pathfinder is faster, but I'm already running that and with the suspended 4E campaign lurking in the background I'm not sure how much more dungeony-stuff we all need. M&M does alright, and ICONS does things even more quickly but we haven't been in as much of a superhero mood lately.  ICONS is great for one-off runs so I'm sure it will return but at the moment it's not really on the radar.


What does play fast, has enough crunch to satisfy us all, and is very well supported, is Savage Worlds. With a variety of settings, fairly simple rules, interesting mechanics, and some nicely done small adventures and plot point campaigns it's tailor-made for running a "smaller" game. I think the campaigns could be as epic as anything else we've done but they seem to fit into the available chunks much easier than a lot of games.

So we're going to try it.

Now I've been a fan of the game for a long time and I've run a fair amount of it but most of it has been scattered across the years with a session or two here and there. This time I have talked to the apprentices and we'll be making a conscious effort to use it for our home games, especially on the weeknights.

So far I've been asked for Deadlands, "Pirates", and "that Van Helsing Monster Hunter game" (Rippers)  so there is definite interest in the options. With Red heading off to college in a few weeks things are going to be different around here but I'm sure he will come back occasionally.

So as we break out the cards and dice I'll post the results up here. Hopefully one of them takes hold enough to turn into an ongoing campaign but I'm not going to force anything just yet. I'm going to see what they ask to play once we have a few sessions under our belts and go with the flow. Deadlands is first on the list and then we will work our way into some others. 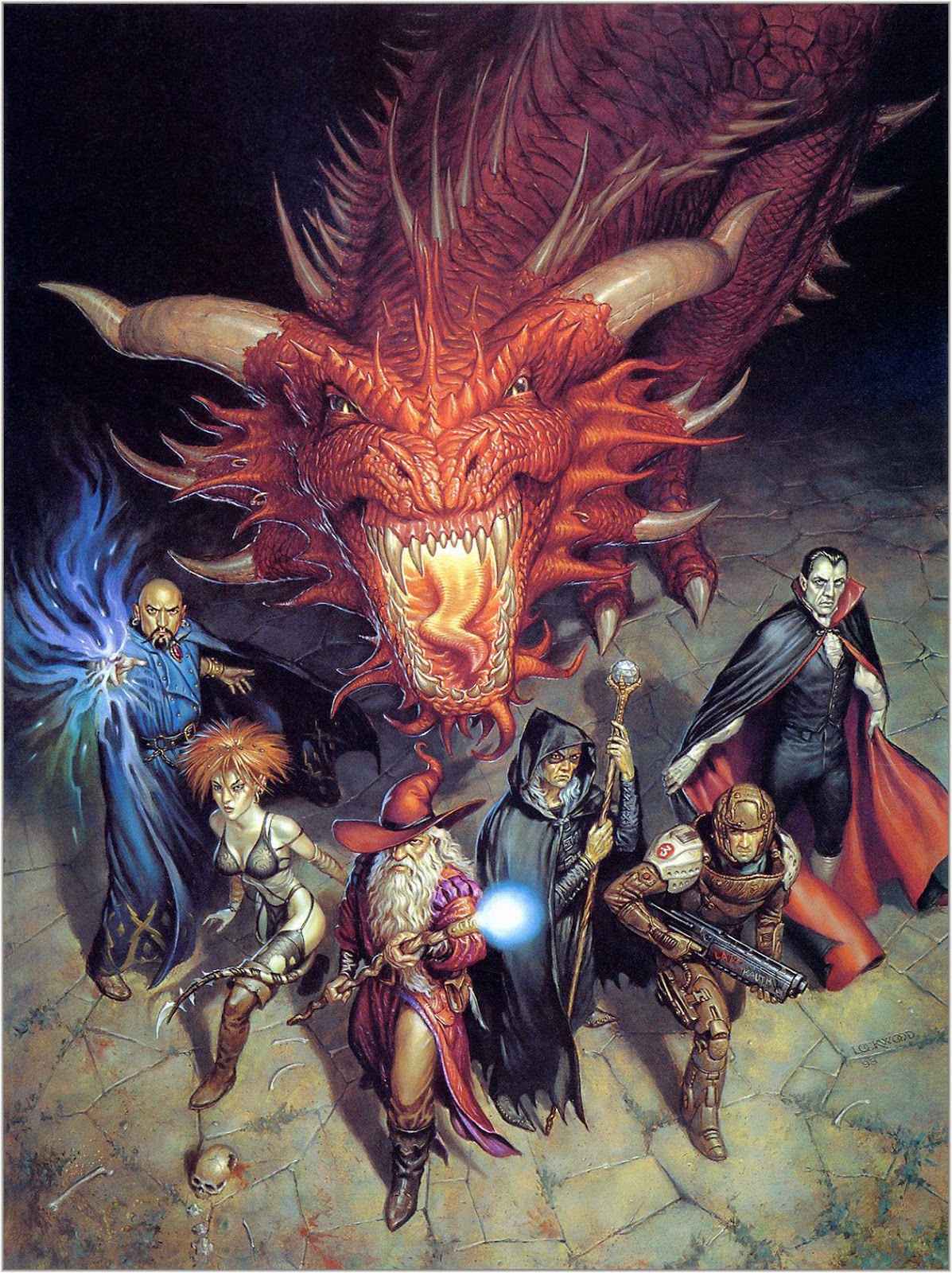 Here's a link to an interview with Mike Mearls. The first section is what really interested me, where he is asked about making the rules available for free:

By sharing the rules, we’re making it easier than ever for people to get into D&D. For way too long the rules have been a deterrent. So, it’s really about focusing on what’s important – campaigns and adventures – and selling that, while removing barriers to entry.

Wow! That is 180 degrees from everything I have ever heard from TSR or WOTC and from what most other RPG companies have done, with one or two exceptions! It very clearly is what Paizo is doing, and I think it's been noticed over at the Wizards place. Now granted, the rules were somewhat freely available with 3E and the SRD, but that was not quite as user-friendly as the new PDF so I'll take that this is a new attitude. There is more:

As far as worrying about sales goes, we’re definitely approaching the business in a different way. In the past, the way to make the business work was to release more and more RPG books. In reviewing sales records, it’s pretty clear that after a few expansions people simply stop buying and many even stop playing.

This works for smaller companies, mainly because they can't release books all that often. I admit that I got that drinking-from-a-firehose feeling with 4E because there was a book every month for a while. That's a lot to keep up with when you like other games too.

Could you imagine trying to keep up with a boardgame if a new expansion or three came out for it every month?

Imagine it? I've lived it, back when Warhammer Fantasy & 40K were well-supported in White Dwarf it was a must-have to get all the rules expansions and new units. 40K has been on quite the run for the last two years as well with some kind of new book or PDF coming out about every month. I will happily take a slower-paced release schedule, especially for an RPG.

In hindsight, it’s actually a fairly obvious move. Let’s say you buy the three core rulebooks and then the two volumes of the Tyranny of Dragons campaign. That gives you everything you need for the next 6 to 12 months of gaming. Do I really have much of a chance to sell you more RPG stuff during that time? Why fight that battle?

Hallelujah! They finally get  it! "Support" does not require a new book every month!

...I think in the past D&D relied way too much on a volume strategy, where we did so much stuff that it was hard for people to get excited about any one thing. Book after book came out each month, far faster than anyone could absorb it all.

Our philosophy now is to make everything count. If we release a new super adventure, like Tyranny of Dragons, or a new rules expansion, we want it to be an event. When you add stuff to an RPG, you’re asking all the DMs out there to evaluate their campaigns, learn new options, and then try to implement them. You have to be very careful in how you add things to the game, and very deliberate in making those additions exciting and compelling.


My dream would be a world where new expansions are real events, where people are seeing exciting new ideas and concepts for the game.

So Paizo is the obvious model here: Rulebooks 3-4 times a year, some kind of small setting supplement every month, and an adventure every month. Campaigns/settings/adventures as the focus instead of rules mechanics. I really really like this approach.

The only other company I can think of that's taking a similar philosophy is Pinnacle with Savage Worlds. For quite a while now the rules have been available for $10 in book or PDF form and the emphasis is on adventures and campaign settings rather than rules expansions. It seems to work alright for them. 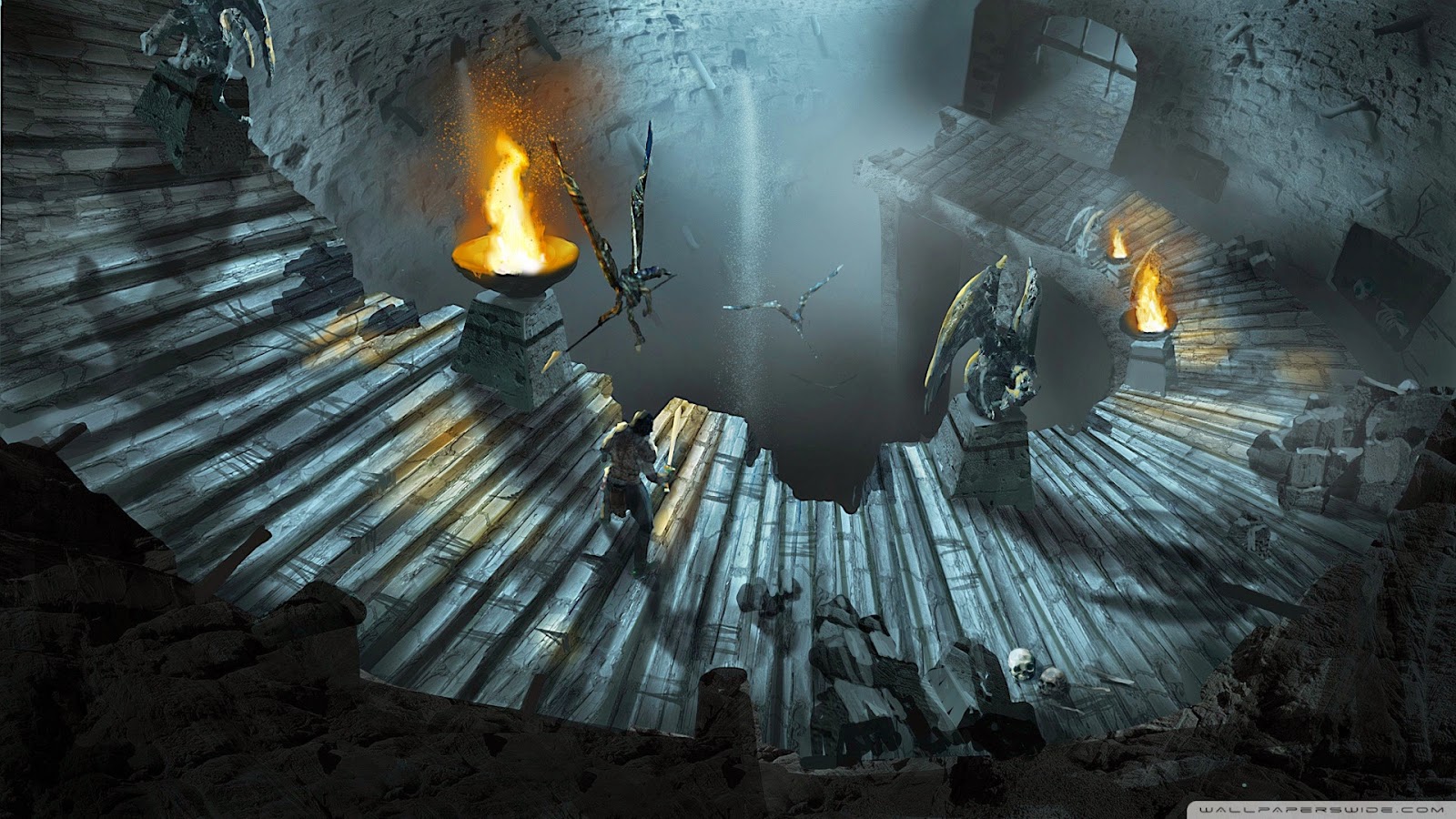 This is what's being said now and I wonder how it will hold up and what we'll be seeing in 2015-2016 as sales numbers start to become real. Perhaps those last two years of not selling a whole lot of books tempered the expectations to more tolerable levels.

I also wonder if this change means we might see more support for old campaign settings. We know the Realms are going to be a focus for this first wave. Maybe Greyhawk gets some love? Maybe Birthright? Planescape seems like a pretty rich vein to mine for adventures and campaign material. One or two setting "events" per year and it could be a really nice run if this course holds.

Will I be running it? Not anytime soon, at least as far as a campaign goes. we have a pretty full plate here with Pathfinder, a potential 4E continuation (someday!), and whatever games we can fit in on the side. But I am more interested now than I was, and I would not be opposed to playing it either.

This is about as positive as I have felt about 5th in a long time. I'm looking forward to what comes next.
Posted by Blacksteel at 12:00 PM 3 comments:


With all of the new stuff on the way from Gen Con I thought I would share something old that I came across recently. This is the TSR catalog from my first Basic Set back about 1979-1980. 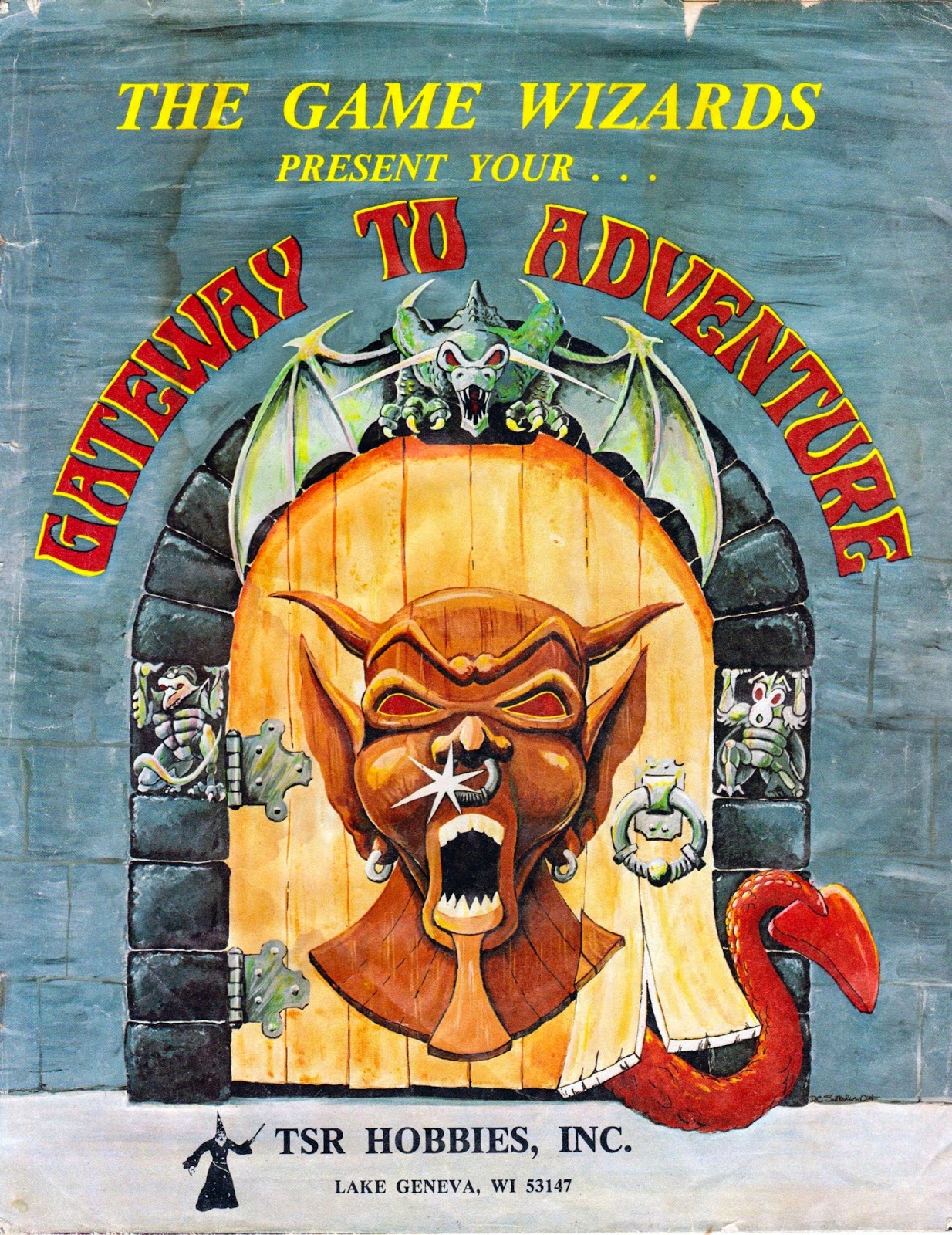 I was a little surprised that it was still intact as it's thin paper and it's been through a bunch of moves and a fire years ago. 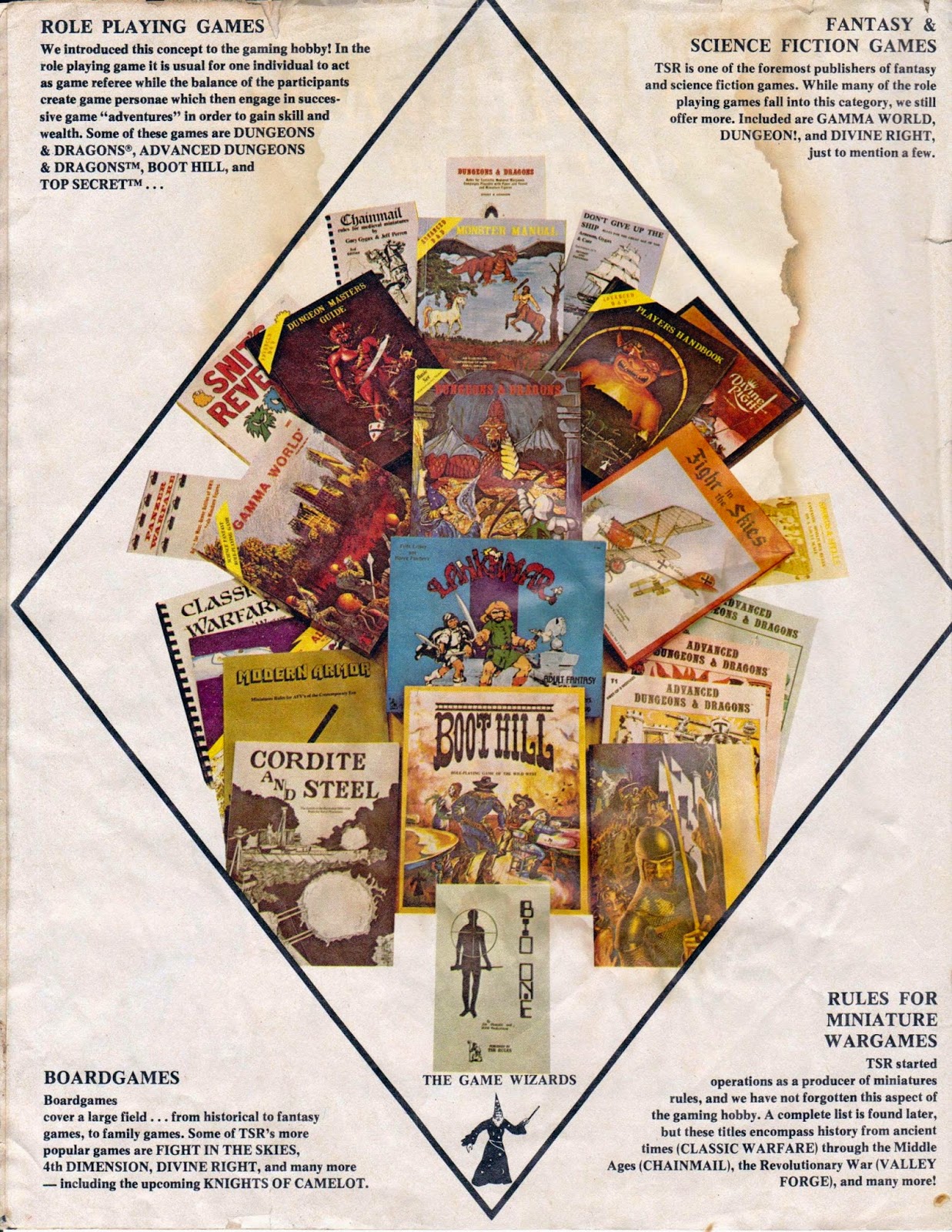 You can see some of the staining from the fire even after I've tried to clean it up a little bit. About the only other company putting out games on this scale was Avalon Hill, another big name that's no longer around. Now I was thinking this was from 1979 but the inclusion of Top Secret in the page above complicates the timing as TS was a 1980 release. It's not in the big picture on page 2 but it is in this one which makes me think it was brand new or about to be released, which could push this back to 79 again. That aside, those were some pretty evocative covers at the time. Gamma World especially spoke to me. I'm sure they look amateurish to newer eyes but when they were new I thought they were cool. 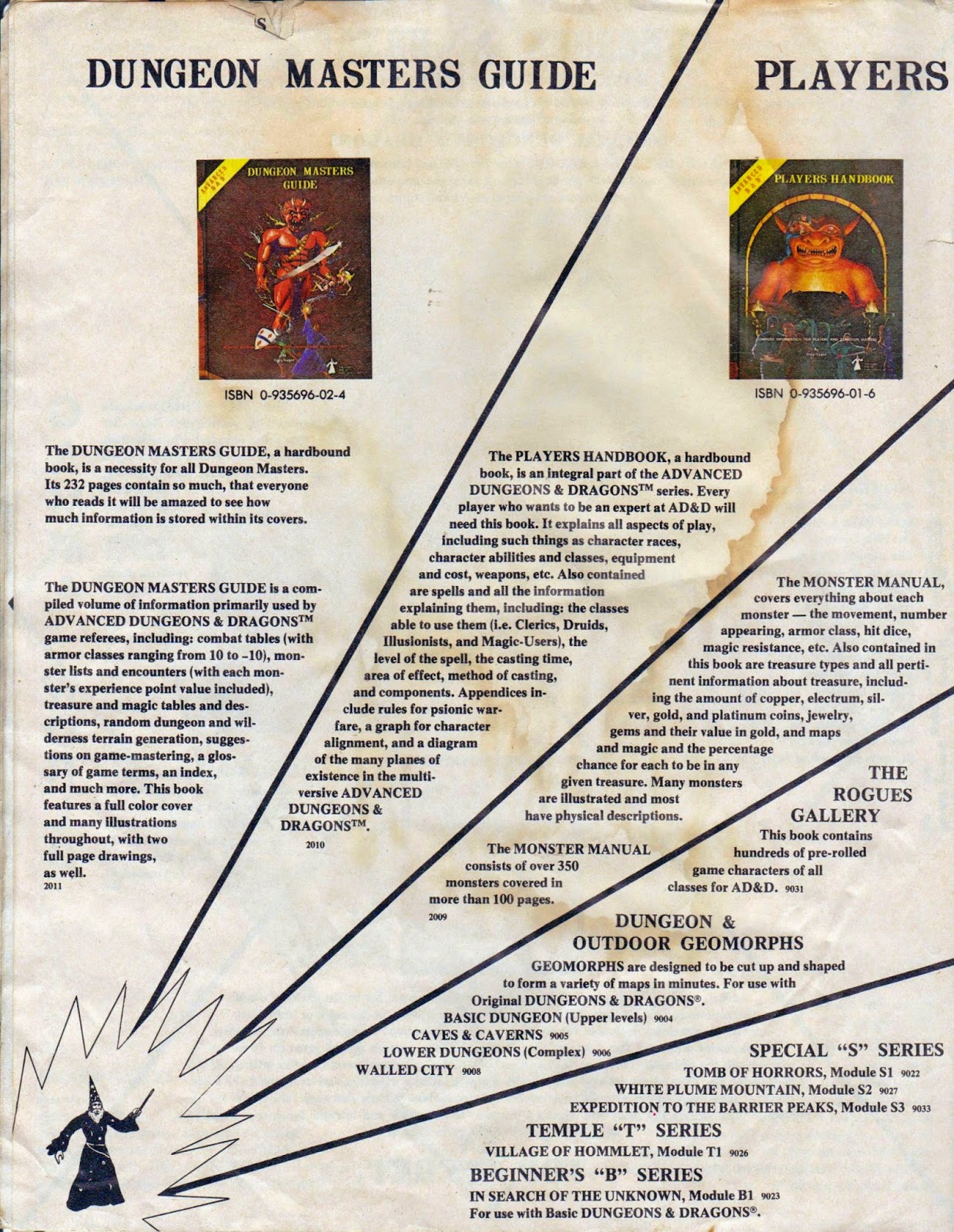 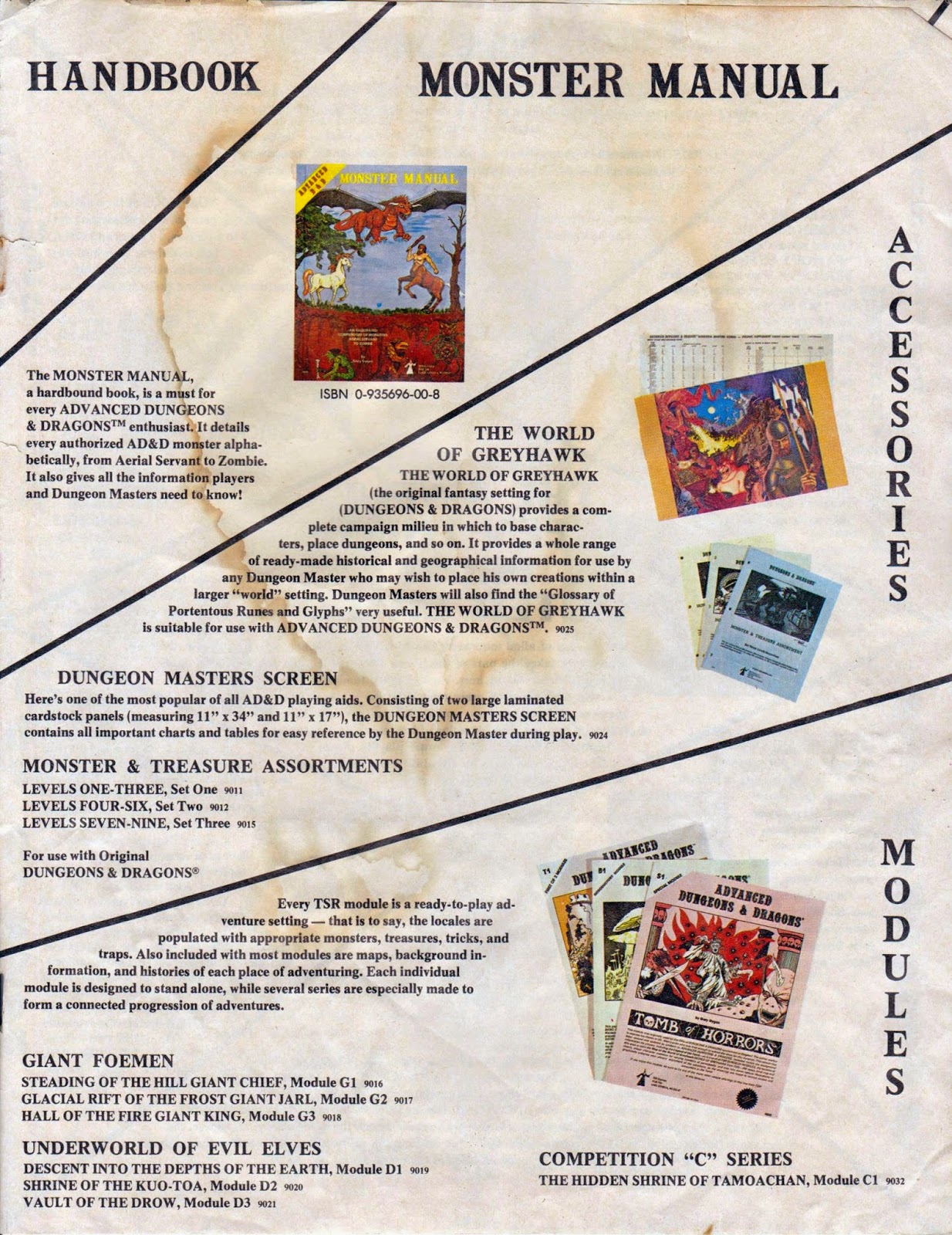 This is the big center-spread of the booklet. So much D&D! By the late 80's I had copies of everything on these pages and had played or run all of these original adventures but it seemed like it took forever to get there. This page also leads to some uncertainty - Top Secret was a 1980 release but so was Deities and Demigods and it's nowhere to be found - surely the next big D&D book would be here if it was close to ready. 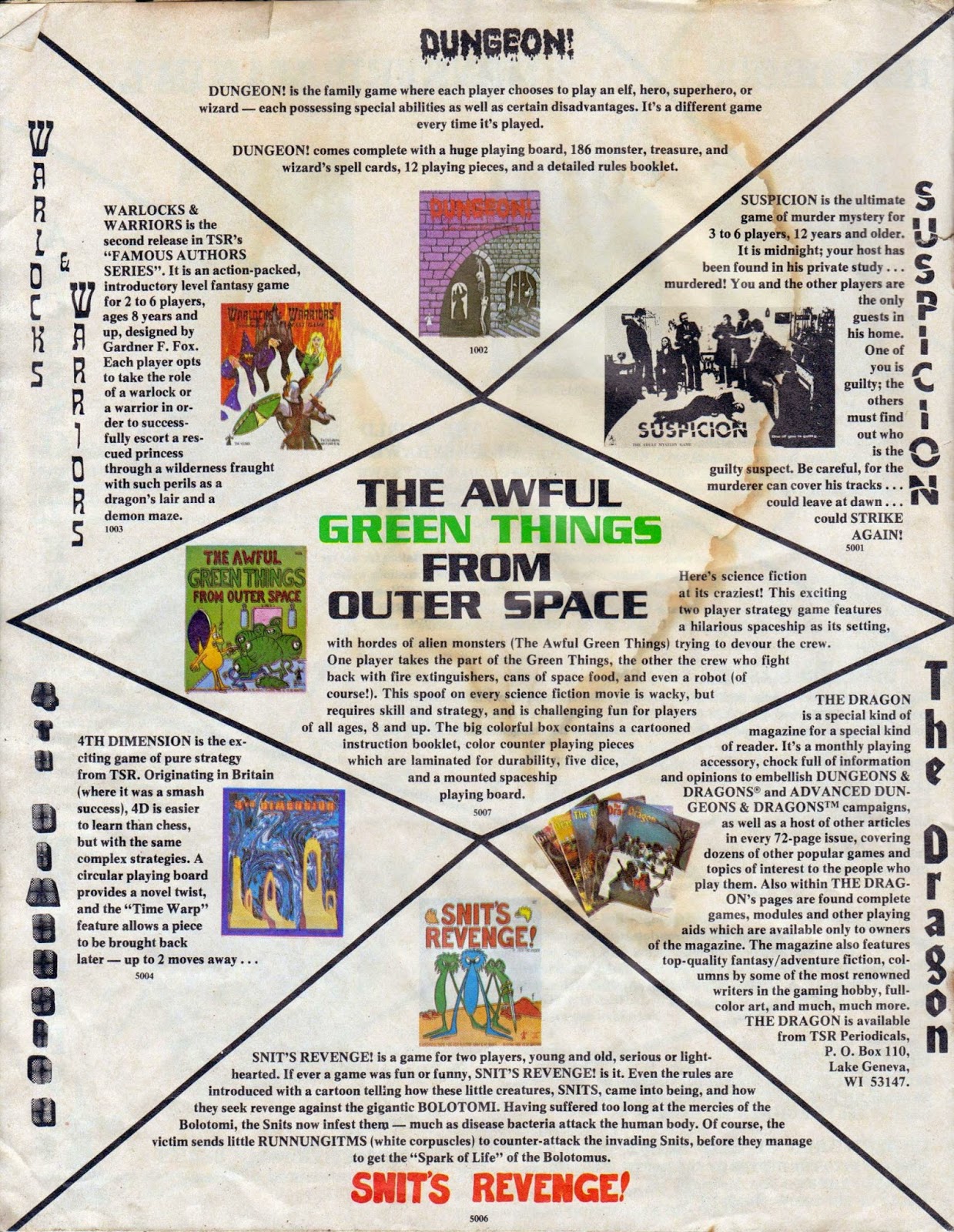 I have some experience with Dungeon and Awful Green Things - and The Dragon -  but I never laid hands on the other 3 board games on the page. That cover to Warlocks and Warriors is interesting though. 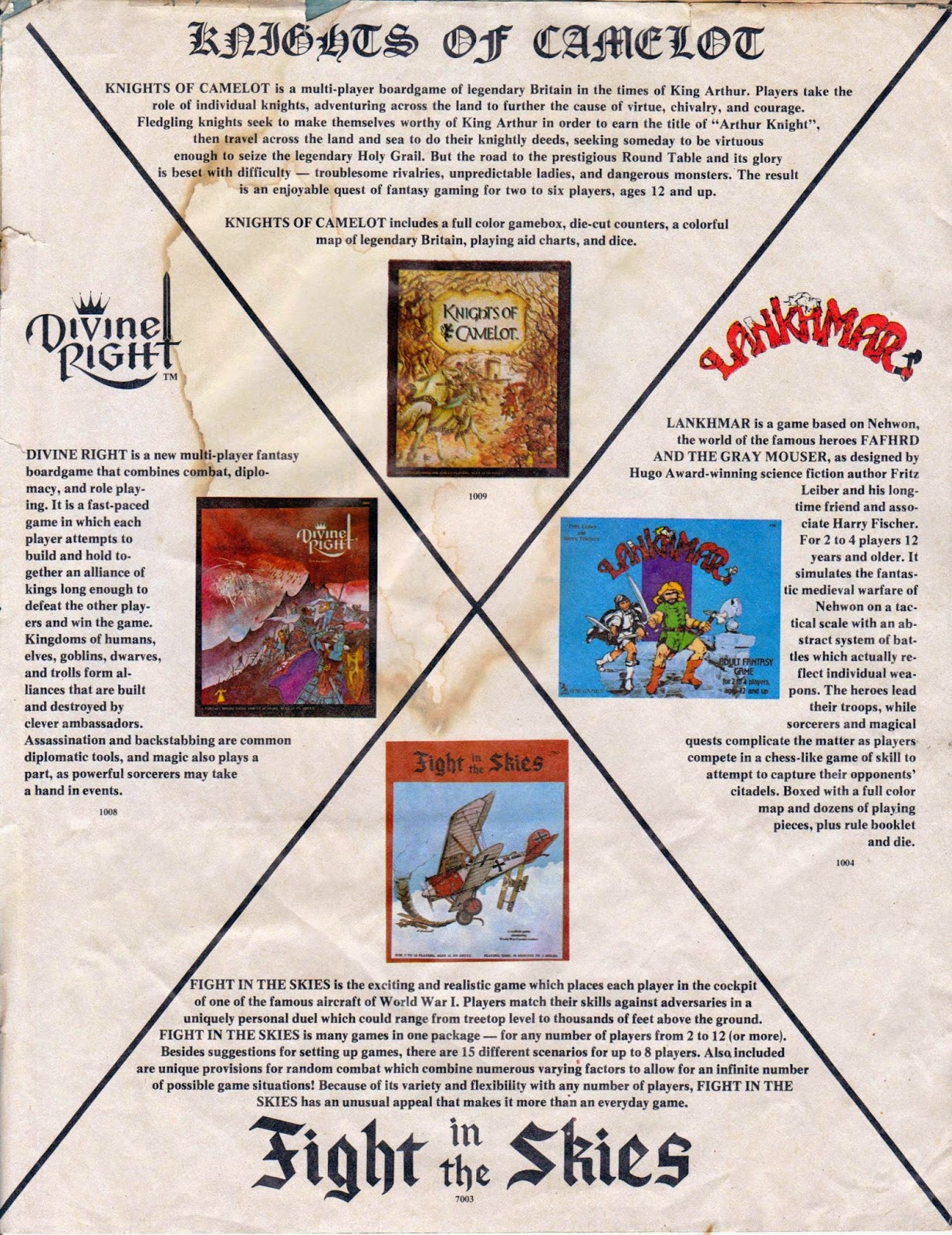 When I started playing I had no idea what "Lankhmar" was about (I was 10 after all) but that Knights of Camelot and Divine Right looked really cool. Fight in the Skies did too but in a different way. I never saw any of them played in person but I did see a Dawn Patrol game (spiritual successor to FITS) at a convention years later. It was done with miniature biplanes and looked really good. 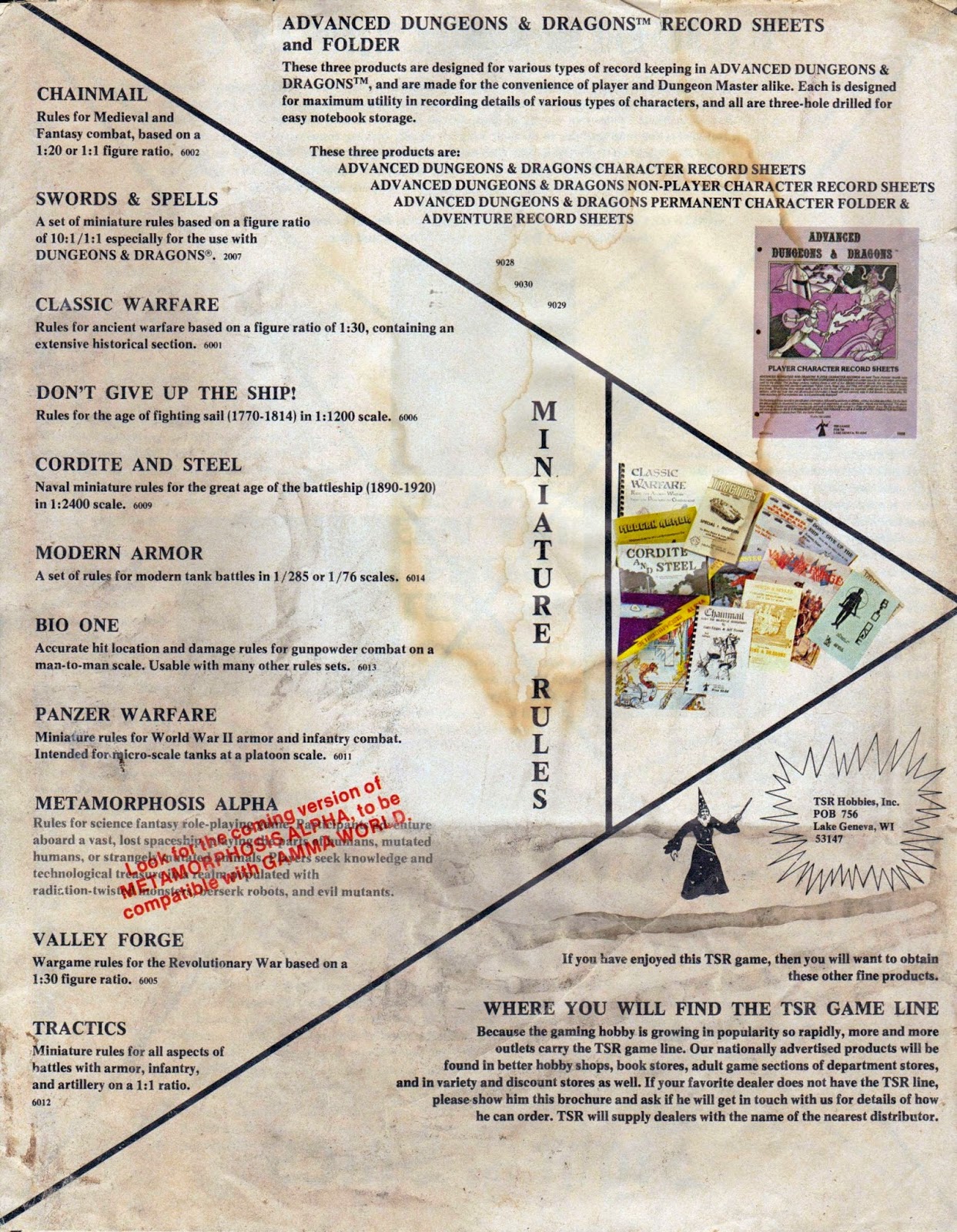 I always felt like I should have picked up a copy of Chainmail and Swords and Spells - roots of the game and all - but I never did. I just never saw them in stores back then. I am also pretty sure we never got that promised version of Metamorphosis Alpha. Well, at least not in the next couple of decades.

There it is - a bit of nostalgia before the Next Big Thing hits in a few weeks. 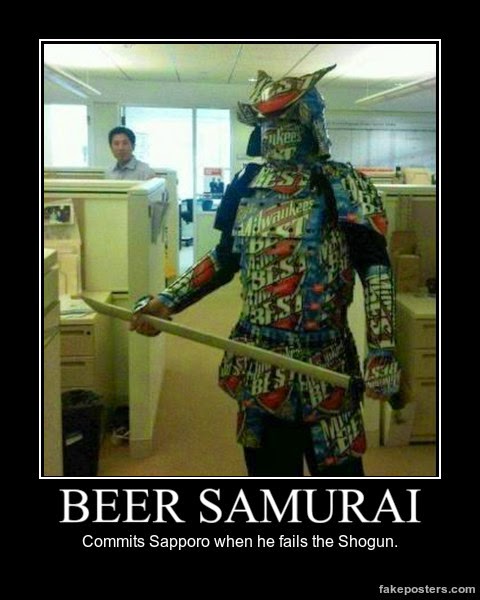