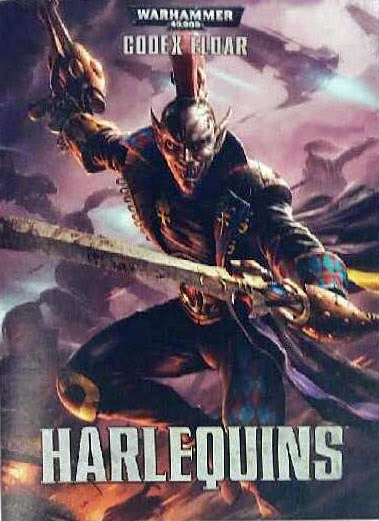 The Eldar are on hold for a bit while I build out more of the marine armies but I am going to have to get that new Harlie codex at some point. I have 30+ of the originals running around here and now with some actual support it could be a lot of fun to play them solo. Meanwhile ... 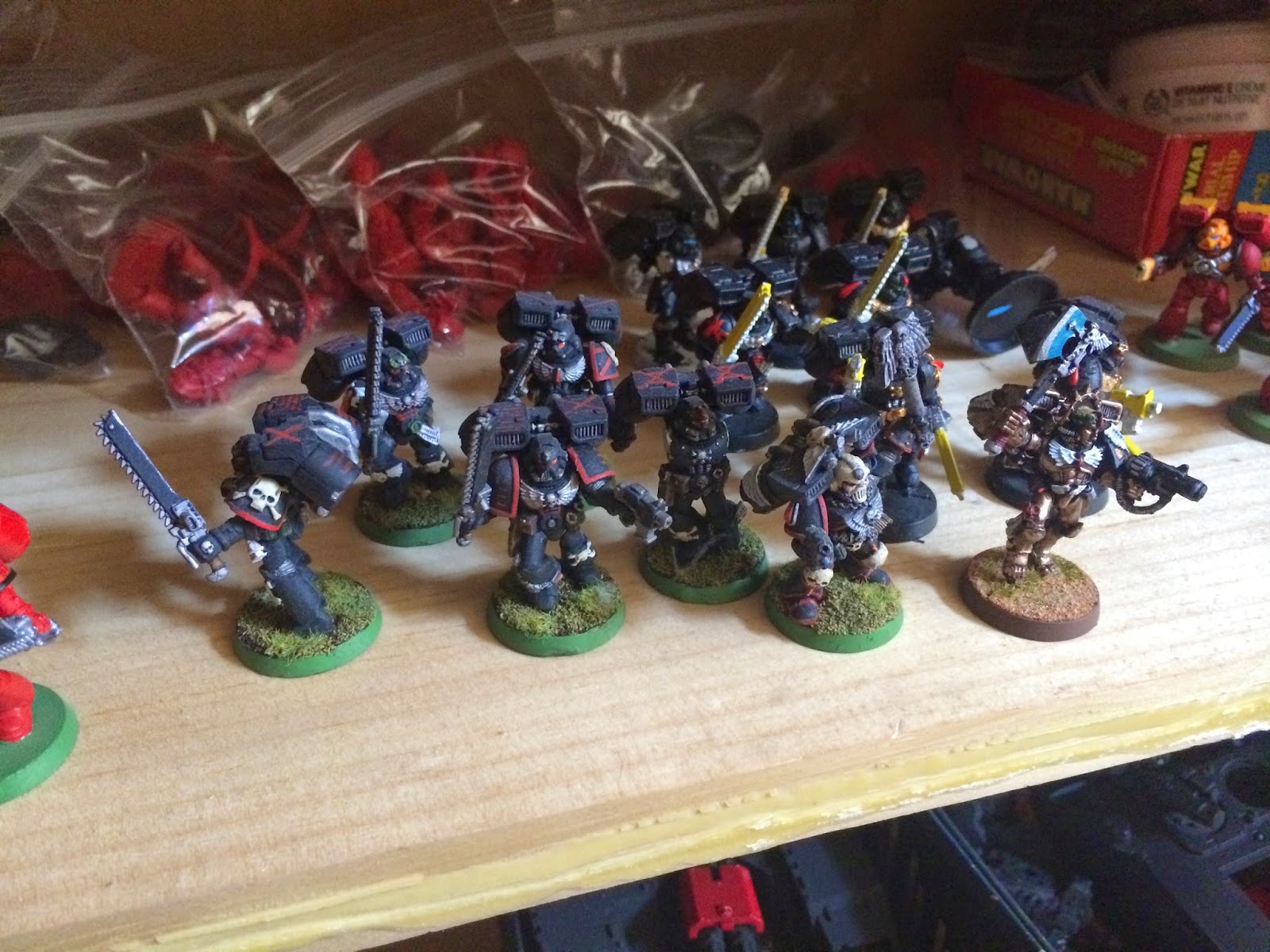 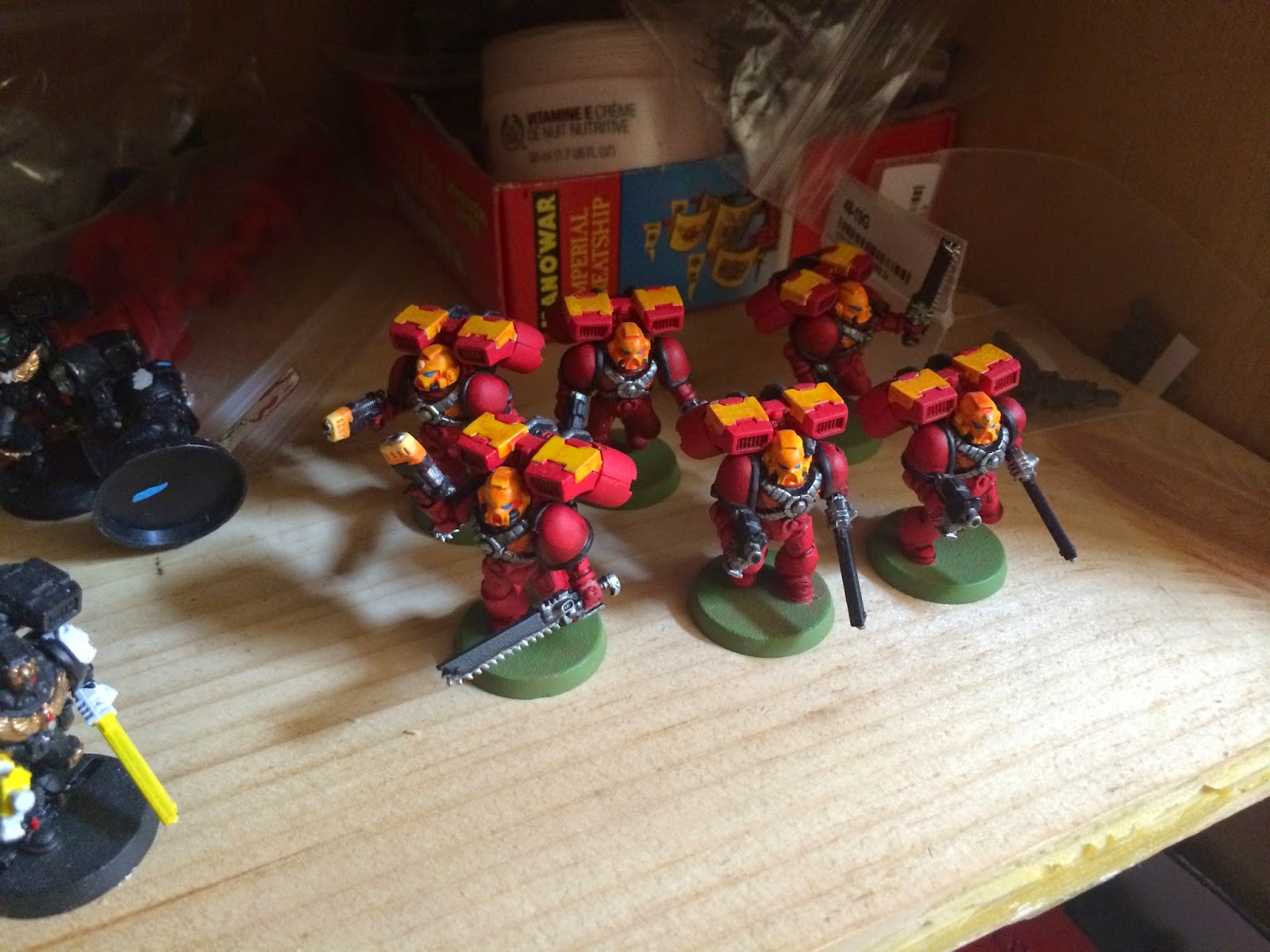 Depending on point levels there might be some scouts, small tac squads or another devastator squad or some terminators in here as well. HQ's were going to be a pair of sanguinary priests joining the tac squads but if I do I have to drop the squad down to 9 men to fit everyone into the pod and that means I lose a flamer. I may be OK with that but I haven't decided yet.

I really like the Blood Angels' vehicular options - Baal Predator, fast vindicators - but for this force I don't really need any so that may be part of a later expansion of the boys in red. 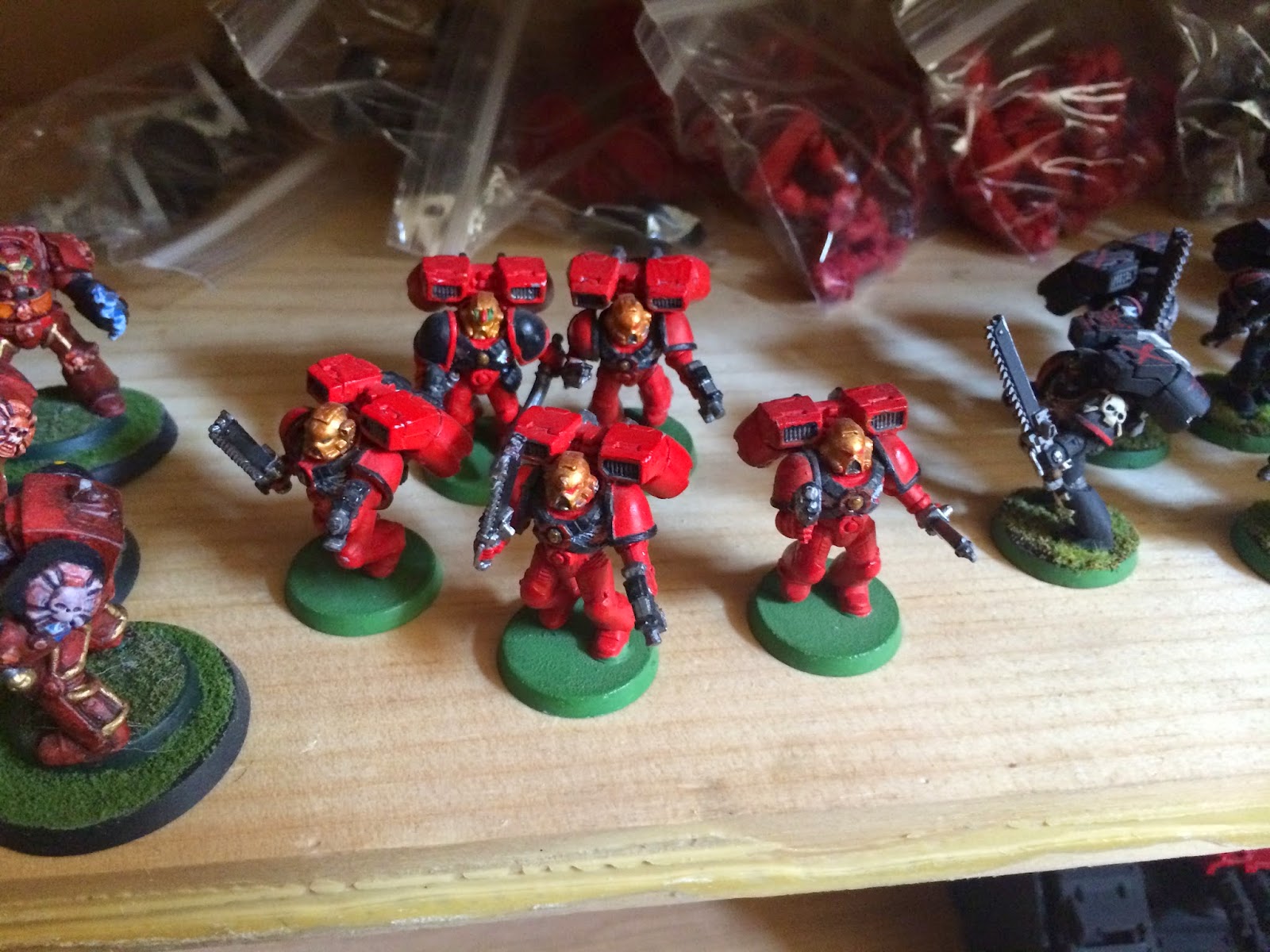 Next time: More progress then the February Big Battle Report
Posted by Blacksteel at 5:00 PM No comments:

Combining City of Heroes and Necessary Evil - Why Not the Rogue Isles?


One obvious question that might occur to some people is this: If you're running a Necessary Evil game and want to set it in the City of Heroes world, why not use the City of Villains home area? Why not use the Rogue Isles? That's a good question.

For one, the campaign is all about juxtaposition and if I have villains running around the "villain homeland" it loses some of that feel. I need them to be reminded that they are "fighting the good fight" whether they like it or not.

Second, the Rogue Isles are a dump and no one cares about them compared to the attention given to Paragon City. What are the big landmarks in the Isles? There's not much. The interesting, memorable stuff is over in the big city where people actually want to live.

Thirdly, Paragon is where the money and the power is. If you're interested in taking control of things, then you need to go to the center of things, and that is not the Rogue Isles.

Also, my players and I spent a lot more time hero-side than villain-side so it is far more familiar. That matters. For a group that played more villainous characters when the game was active I can see it becoming the focus of a campaign but for us it just does not make sense.

In-game I intend to justify it by saying the Isles were blasted by the V'Sori early and often. Much like before, it's a somewhat anarchic zone that is monitored but not occupied. We may take a trip there during one of our missions, but it's never going to be the focus of the whole campaign.

"But what about Arachnos and Lord Recluse?" I hear you saying. To which I reply "yes - what about them?" Perhaps that's something that needs to be investigated. Perhaps our villains protagonists will investigate that. We will just have to see.

Combining City of Heroes and Necessary Evil - the Content

So now that I have a framework for how I think I can run this, I need to decide on the meat of each session. Since it's still "Necessary Evil", regardless of setting, I'm going to start with that.

The core plot unfolds in 11 adventures. Originally it was 10, but the explorers edition added an 11th which is good because the original finale was not good and I was planning on changing it anyway. With the reset to Paragon City I plan on changing it even more. For those familiar with the adventure, Star City has a sort of plot of its own tied to its history, and it ties in to the original finale. I'm planning to drop that whole element anyway, rendering that particular plot point meaningless. My players also finished the first 3 plot points back in 2010 when we started this and we're keeping those adventures with a little bit of a retcon to reset them in Paragon City. So I have 7 core plotline adventures. These are pretty much usable as-is with simple changes to names, locations, and some NPC's to reflect the new setting. There's only one other major setting discrepancy and I'll talk about that below.

Fleshing out the main plot are a bunch of other adventures that form the meat of the campaign. Given my plan I need to build out 5 of these into "main" adventures, and pick out 12 of the remainders as "B plots" for the campaign. That will use most of what is provided but it does leave me some room to skip the entries that don't fit as well.

Finally I have to think about working in the flavor of City of Heroes. I think there should be some kind of touch point to Paragon City in each session. CoH had a lot of landmarks, like statues and islands and buildings and those could play a part. There are a lot of good and evil organizations and those should have a role. There are also specific heroes and villains that show up in the game and those make it feel like home too. My initial thinking is that each session should involve a group, a location, and an individual character in addition to whatever A & B plots are happening. Frostfire was a big adventure run at the lower levels in the game. One session will probably deal with Frostfire, the Outcasts, and the Hollows. If I can find a plot point that would tie into them nicely, so much the better. The Hollows zone was also tied into the Trolls and the Circle of Thorns and might lead into something with those groups in either the prior session or the next session. Officer Wincott was a normal cop in the zone and he might show up too. Laying out a web of these kinds of connections is the real challenge here in my eyes.

Another example: There is a non-core plot point involving a dam. I like it, so I plan to use it. In the original adventure it's Hoover Dam, so it involves a trip to Vegas and while that's very comic-bookish involving the landmark and all, it felt a little odd in a campaign that is so heavily focused on a single city. Fortunately, Paragon City has its own dam which was the location of a popular task force. Revisiting it during an alien occupation invokes both a familiar location and allows for some ties back to that original task force. The primary enemy there was the Vazhilok, a sort of zombie group. The primary allies were Longbow, a Shield-like organization. It involved a running fight into, through, and on top of the dam itself. This gives me some nice ties back into Paragon City lore and some ideas on how to expand it into the focus of an entire session. There were also some ties to the Clockwork and the Circle of Thorns in those missions so now I have some potential links to other sessions if I want to focus on any of those groups.

So flavoring and tweaking the preset adventures, then adding in some additional material for additional flavor is he plan. There are also some plot complications to resolve as well. The biggest one is that Atlantis plays a large role in Necessary Evil but there is no Atlantis in City of Heroes. This was a conscious design choice from what I have read and there were no plans to develop Atlantis or an underwater city of any kind. Solutions:


Honestly my initial reaction was the second bullet, but after taking a break for a few days and coming back to it, I'm leaning more towards the first one. Most comic book settings have some kind of Atlantis, so it's not like it's a genre violation. Also, characterizing it as an MMORPG expansion is really starting to appeal to me, especially since I'm using a no-longer-active MMORPG as the setting. I need to make some more notes but it has a lot of potential and requires a lot less ret-conning effort to the adventure.
Posted by Blacksteel at 12:00 PM No comments:

Combining City of Heroes and Necessary Evil - the Framework

Once I decided to combine these two things, I took a look at what I had to work with and how I wanted to integrate them:


I was originally thinking it would be a simple "repaint" (e.g. there's a mission involving a dam, well I'll just recast it at the Faultline Dam and we're good!) but there's so much more background available with COH that I want to do a lot more. Attempting to run this on a fixed schedule though means that adding anything in might require eliminating something to make room. With roughly 30 NE adventures and planning to run 12 sessions for the whole campaign (once a month for 2015) I'm looking at 2-3 of those per session before I make any changes. Now these are not lengthy dungeon-crawl type adventures, and Savage Worlds plays pretty fast anyway, so for now I'm going to schedule it out like this:


If I can pace this out correctly, that means I run a core plot item once every other session, an "other" plot item every session, sometimes more than one, and one Paragon-specific item per session too.  Now that's all fine as a mathematical exercise, but things rarely flow that neatly in play. Players get interested in a particular character/group/plotline, somebody misses a session, we have to cancel one somewhere, distractions mean we get less done than hoped for - there are a lot of variables. Heck, I don't have a great feel for how much we can get done in a "normal" session just yet so this is all just estimating for now.

The other main consideration in planing is to make sure each session is self-contained - an episodic campaign rather than a normal serial-type campaign. By the end of session A, we should have completed X,Y, & Z. Playing only once a month I don't want to have to track combat states with a 3-4 week gap in between. This also helps deal with player schedule hiccups, among other things, and it feels more like a comic book anyway.

Note: Thankfully in a supers game or any mission-based campaign it is possible to do this kind of planning as they tend to be more closely directed and/or more reactive so the GM has a lot of control over when and how things show up. If I was running a sandbox game or a mega dungeon I wouldn't be trying to manage it this way, namely a fixed-time type of campaign.

Now, with a framework for the campaign sketched out, I can start planning what goes into each session. More on that next time!
Posted by Blacksteel at 12:00 PM No comments: