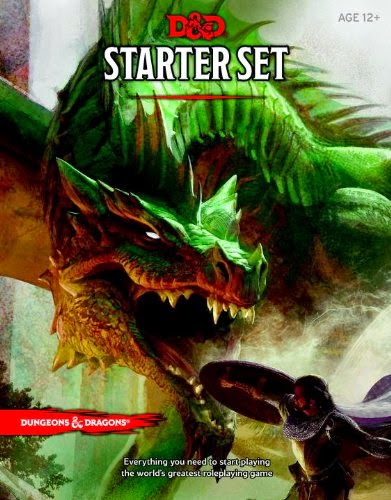 I'm actually going to be playing, not running, so this should be fun. I expect I'll have more to say next week.

Posted by Blacksteel at 9:42 AM No comments: 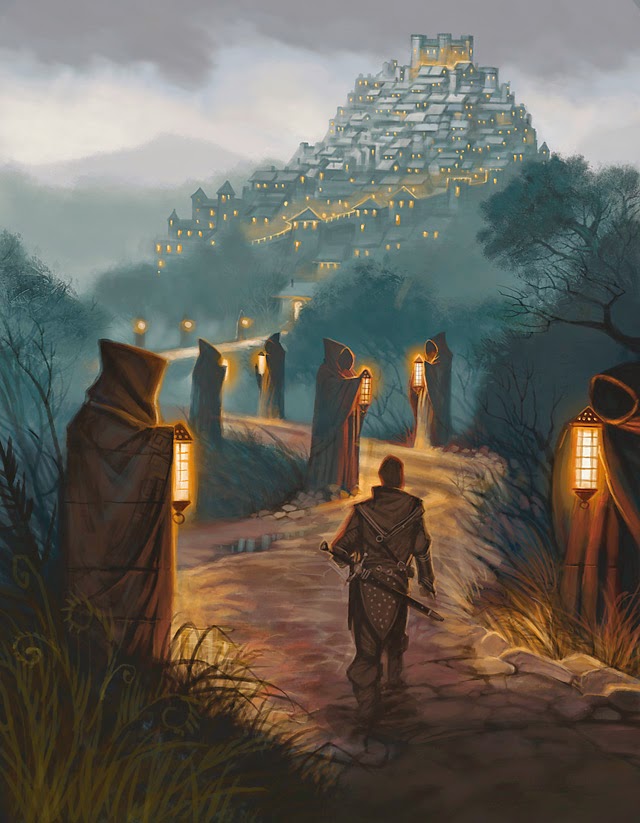 Barking Alien had a post yesterday inspired by a post from Monsters and Manuals last week that started some wheels turning for me. Rather than restrict it to a comment on those worthy blogs I decided to make it a post here as it goes to the heart of what I do with the hobby. So go read those really quick if you haven't then come back here for the next chapter.

Noisms uses the phrase "the tiresomeness of new systems". I sort of get that, but for me the "tiresomeness" usually comes in with new editions of games I already have that don't really change anything. Especially when they come out far too quickly. Truly "new" systems are interesting to me. For example:

There are other examples:

There are many older games I like just fine. I prefer older versions of Gamma World, for example. If I wanted to play a "pure" cyberpunk game then CP2020 is what I would reach for on the shelf. For Star Wars I'm doing d6 or Saga Edition, not FFG's new stuff. One of the primary reasons may be that I almost never feel like I have exhausted the possibilities of any system that I like. Run a game for a year and I probably have a dozen new ideas for campaigns that I will never get to run. About the only reason I would skip an old game is if there's a version I think is truly better mechanically, to the point it's not worth the hassle of that older version. 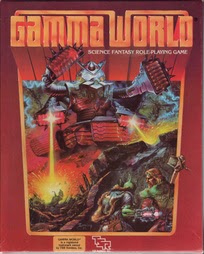 There are many newer games I prefer - Marvel is one example. I like Mongoose's edition of Traveller probably best of all. Newer is not always better, but it's almost always worth a look. Icons is better to me than Heroes Unlimited.

Sure, there is some attraction to running a game that I already have, that's not being expanded every month by a publisher in the form of $35 hardbacks, and that I know like the back of my hand. I'd happily run that game, and I have. 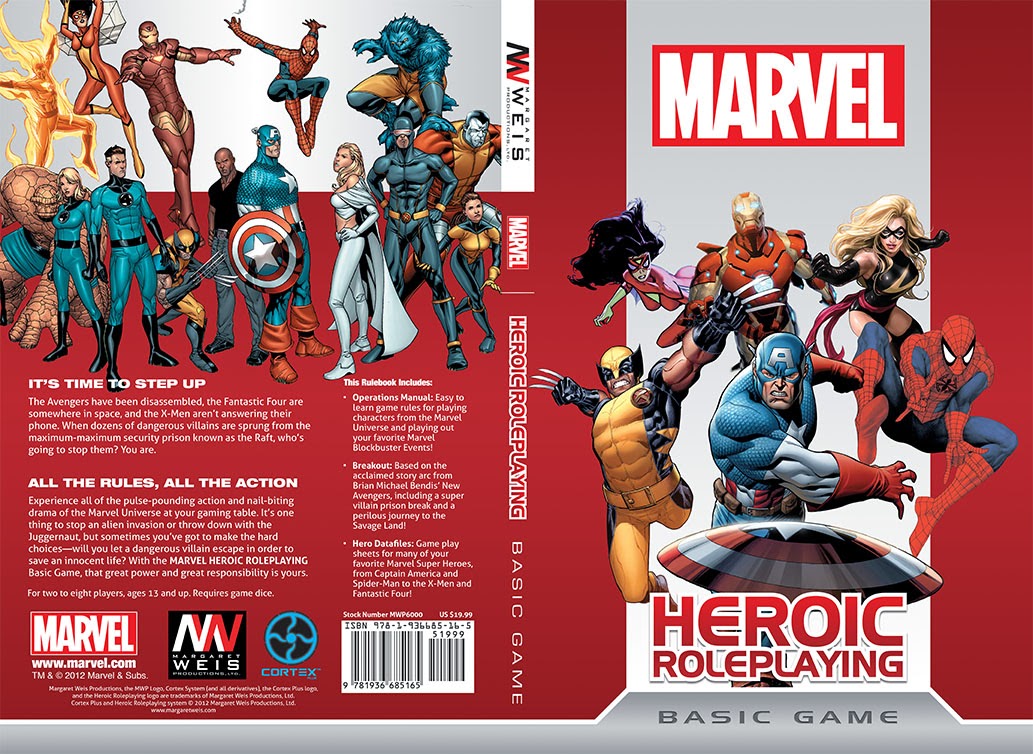 However, I also like to see what's new, what someone is doing with an old setting that has new mechanics, or someone tweaking old mechanics to use with a new setting. Just, show me something innovative or interesting, don't just sell me the same old thing with a couple of tweaks (40K, I'm looking at you). Push me to the point I dislike it at first and that it takes a second or third reading to truly grasp it. Take a good setting and system and streamline it like Deadlands Classic vs. Deadlands Reloaded. Take an old setting and give it a new mechanical overlay like DC Heroes to DC Adventures. Do something completely different like Numenera. In short give me a reason to care, something new to chew on besides replacing d20 rolls with 2d10 rolls or changing up the skill list. 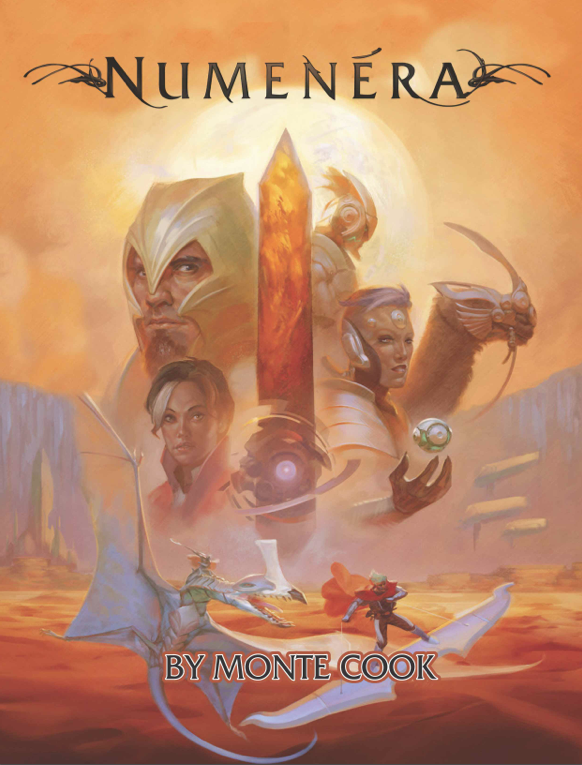 As BA mentions in his post, it's an ongoing experience, a learning experience. I don't ever expect to find that one perfect game - I pretty much reject the concept - but I do think some games can just be flat out better than others and I acknowledge that someone may have a way  of looking at things game-wise that is awesome that I would never have come up with myself. That's part of what makes it fun. 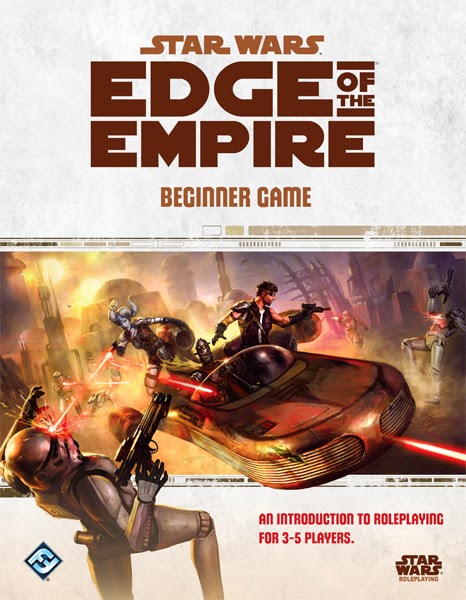 Coda: The preference for existing systems is not restricted to the older generation:
Posted by Blacksteel at 12:00 PM 1 comment:

This is in the 5E PHB and I liked it: 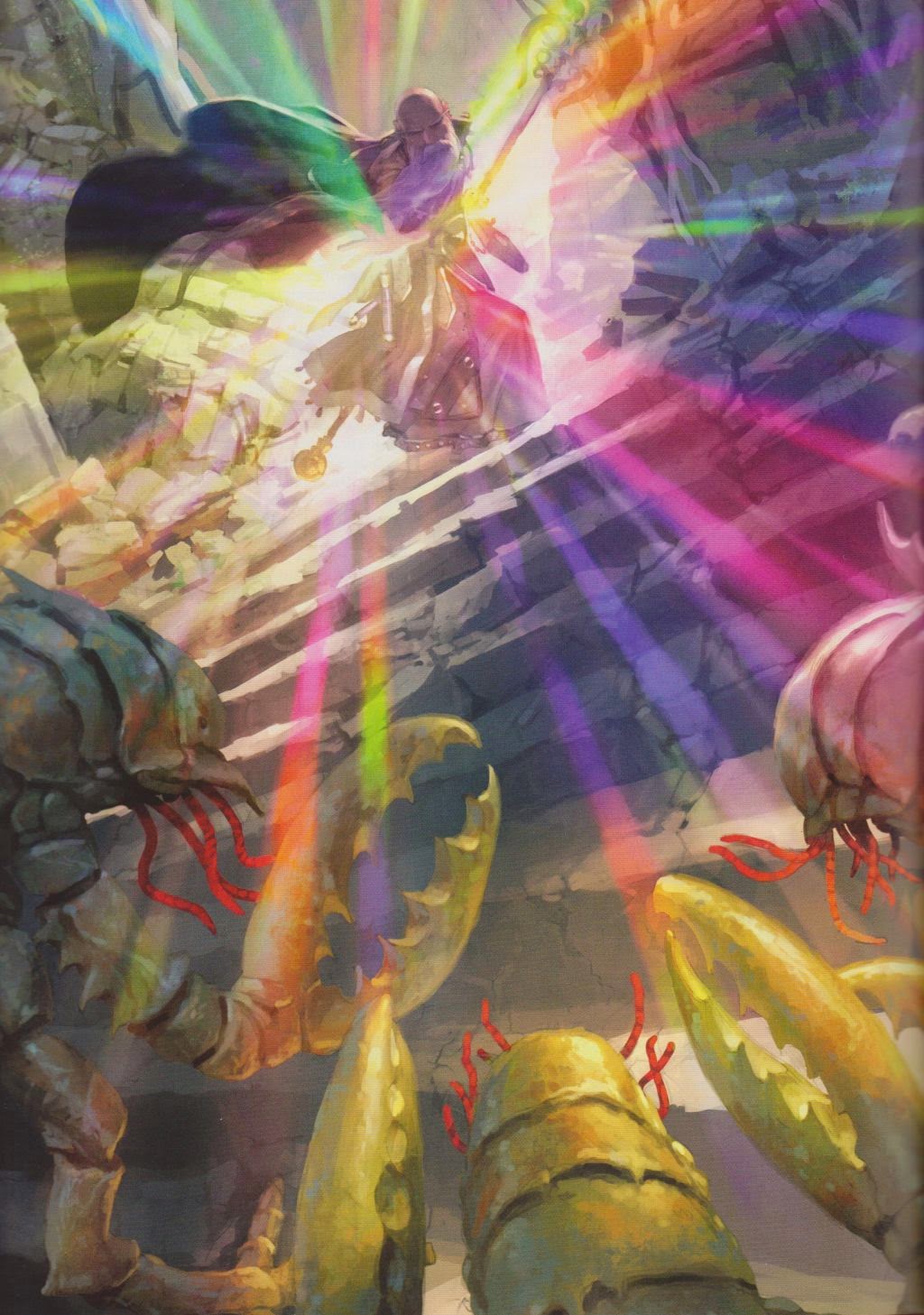 I started thinking about it. To me, Prismatic Spray is one of those iconic D&D spells, but I don't think I've seen an illustration of it before. I also don't think I've had a character cast it since 1st or 2nd edition, partly because I haven't played as much, partly because I don't play a ton of wizards, and partly because it's a pretty high level spell. Can a 7th or 8th level spell be "iconic"? I'm not sure, but if it can be this is definitely one of them - hey, it's "death by rainbow". I also don't know the origin, or at least I don't remember coming across it, but I suspect it's from one of the Jack Vance dying earth novels.

Anyway, it struck me and I thought I would share.
Posted by Blacksteel at 12:00 PM 6 comments: 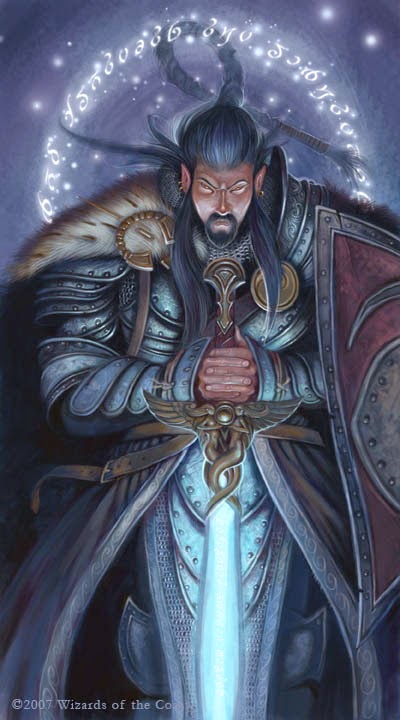 So in the last few weeks I've been diving into several different games - skimming through 4E to shake the rust off in anticipation of finishing up Red Hand of Doom (finally!), keeping up with Pathfinder for my other ongoing campaign, and then reading all the new 5th Edition D&D material. There have been others too, but those three are basically different flavors of the same game and spurred some thoughts I wanted to get down. Sometime soon we will be deciding on our "main" campaign for next year and this kind of thing influences what I'm thinking.

For cinematic fantasy combat, and I mean mechanically well-defined cinematic combat, not roll-high-and-we'll-describe-something-epic combat, 4E is the king to me. No other system comes close as far as having this kind of stuff built in to the mechanics of the game. Forced movement, reactions,  and interrupts force the whole party to pay attention even when it's not their turn. This does come at a price, as it does take some time to play out a battle but it pushes for a different kind of D&D experience - less emphasis on hacking through six rooms of grunts to get to the orc chieftain, and an idea that maybe there should be fewer, but more meaningful/interesting fights. It works with older style adventures - I've converted a few, pretty faithfully - but it did have me wondering about starting from a different set of assumptions. 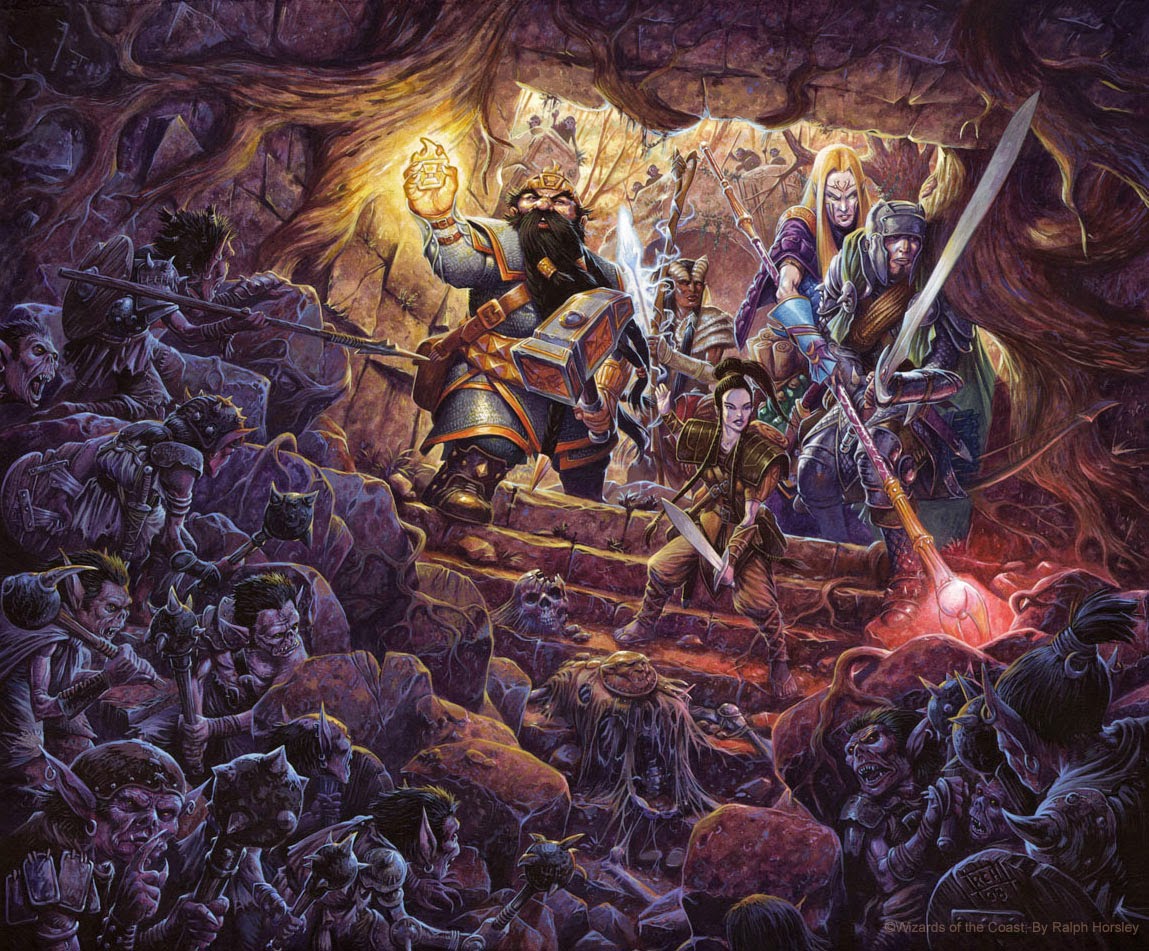 More importantly, it rewards teamwork in some amazing ways, with powers and abilities that build on each other. Synergies can build between all 4-5 members of a party and let them do some very cool things. The downside here is that if one or two people can't make it on game night those benefits are lost and while it can be fun to look for some more focused ways to work together, it can be difficult to adjust expectations when those force multipliers disappear. In my experience, it was the least-forgiving edition when it came to working around missing party members. All of that niche protection and ability to grow your characters with complimentary abilities creates a sort of web between them that is damaged when you lose a member. In he end this became a bigger problem for our campaign than the length of combat. If we take it into Paragon Tier for 2015 then we're going to have to make some different assumptions about party size and composition to try and keep the game on a more regular schedule. 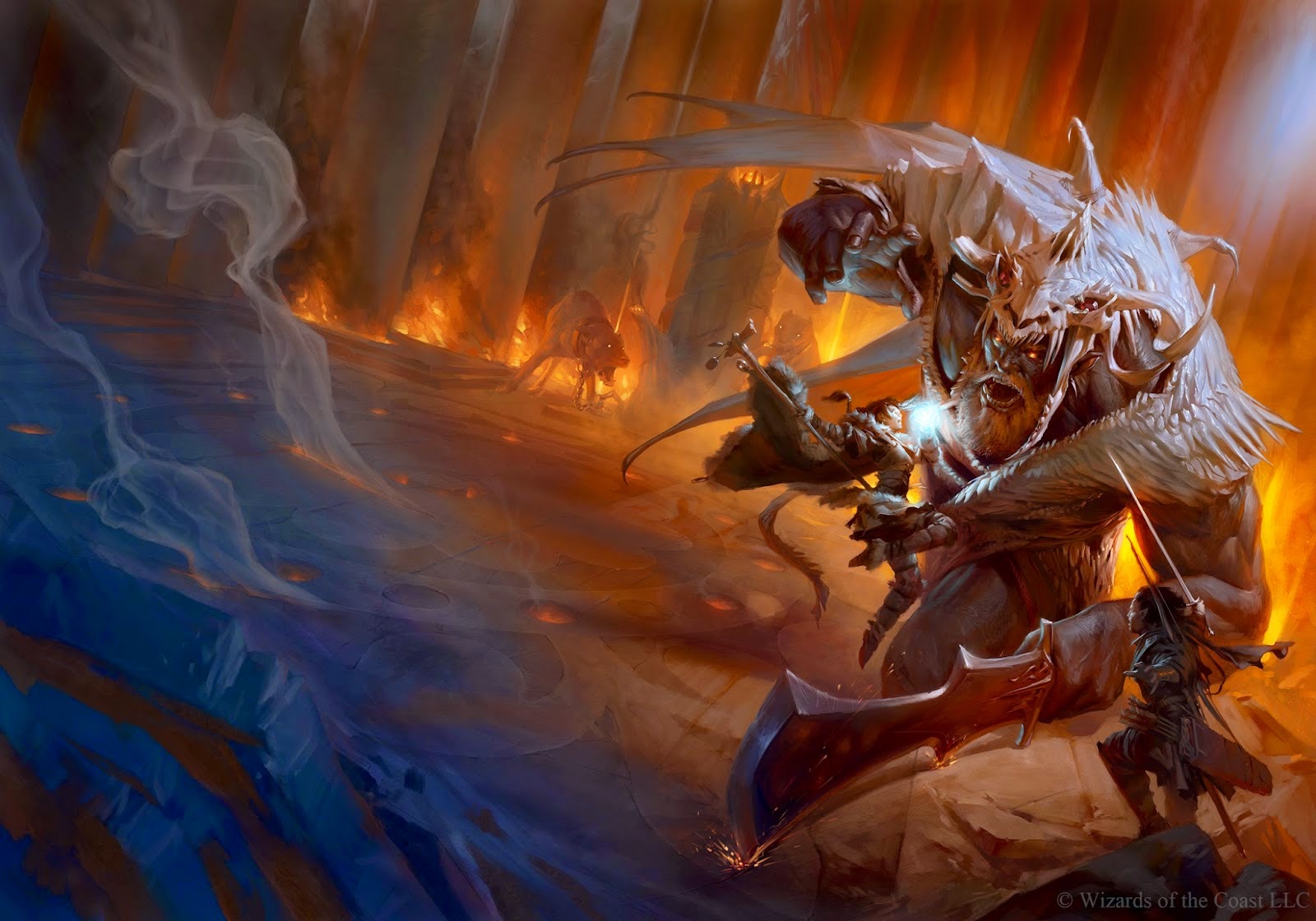 In contrast to 4th Edition, 5th Edition dials back the detail in a big way. Now I have not run it or played it yet, but I've made a character for a game coming up this weekend and there is just ... less there. I had no problem coming up with a concept and working the mechanics to fit it but the lessened game detail around races and skills, the change in how feats are used within the system, and the general de-emphasis on "numbers" and detail make it feel smaller. There's more detail than with, say, an old school Basic D&D character, but not as much as you might think.  I do expect it to play much faster than 4E when it comes to combat, and its looseness when it comes to non-combat activities should keep things moving too.  It's interesting, and we're going to explore it.

I've seen a  lot of interest in Backgrounds as one of 5E's new features. They are interesting, but 4E had a similar concept called ... Backgrounds! The Forgotten Realms alone had over 20 of them. Just like 5th they were a way to connect your character to the setting, whether by occupation, race, affiliation, or something else, and they included some kind of mechanical benefit like extra  skill choices. I was glad to see them carried over and given a more prominent place in 5th but the current options are pretty limited. I'm betting we see more before long. 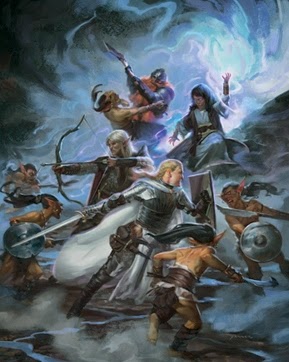 I expect 5th will do just fine. Those tired of the mechanical complexities of other systems will see it as a breath of fresh air. I do think converting older adventures, especially 1st & 2nd edition adventures, will be pretty easy. I intend to find out myself at some point, but for now it's just speculation. I don't think it will be the ultimate answer for everyone as some people like a fair degree of crunch in their fantasy game.

Speaking of crunch, I've also spent a fair amount of time with Pathfinder over the past year and it has moved from being the "extra" game to feeling like home in a way. It's popular, so it's easy to bounce ideas off of other people. It's incredibly well supported so there are a tremendous number of adventures available and a lot of mechanical options as well.

As a player I find that between stats, race, class, archetype, skills, feats, and traits I can create a character for darn near any concept I can come up with. Traits are a little like Backgrounds, sharing the same purpose at least. Archetypes are an underrated element added to the prior framework by the Pathfinder team that allow for a tremendous degree of tweaking a class to fit a particular concept. Looking at Hero Lab, for Barbarian alone there are 21 archetypes, and I don't have all of them in my HL setup. Mix that in with all of the class options in the current game and I'm comfortable saying it's going to take an extraordinarily picky player who can't find something to match their concept.

As a DM it's become easy enough to run that I enjoy it, being able to focus mainly on the game and less on the overhead of executing the system. It's less involved in many ways than 4E combat, but more detailed than 5E, which leaves me in a place that I am pretty happy to inhabit. A few years ago I would not have believed that a close relative of 3E would be such a comfortable middle ground but that's how it feels right now. Just detailed enough, and yet still fast-moving enough, that it just fits. 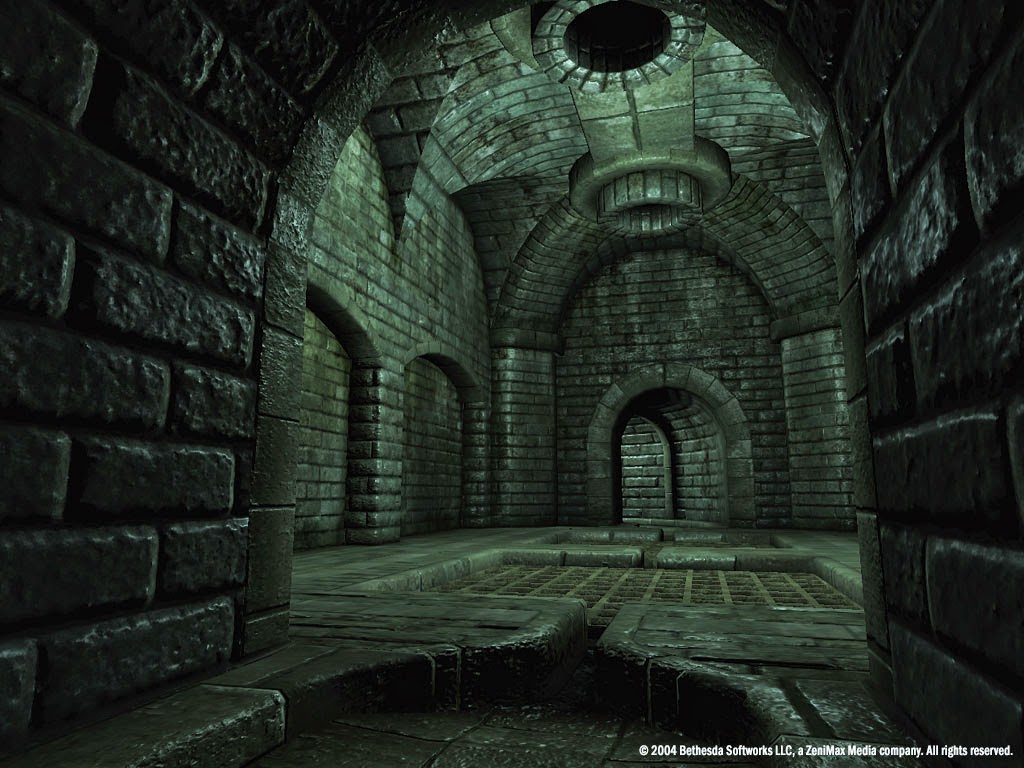 So they each have their strengths. If we pick up Stonehell again I'd consider flipping it to 5th Edition just to give it some more flavor without getting too complex. For published adventures, I'm a fan of the Pathfinder Adventure Paths and plan to run those for the next few years, maybe as the consistent "backbone" of my RPG time. I'd love to focus on a more cinematic approach with 4E and if we decide to go that route as a group I will, with a mix of published material, homebrew stuff, and conversions of other adventures. Why limit yourself to just the one game?
Posted by Blacksteel at 12:00 PM No comments: 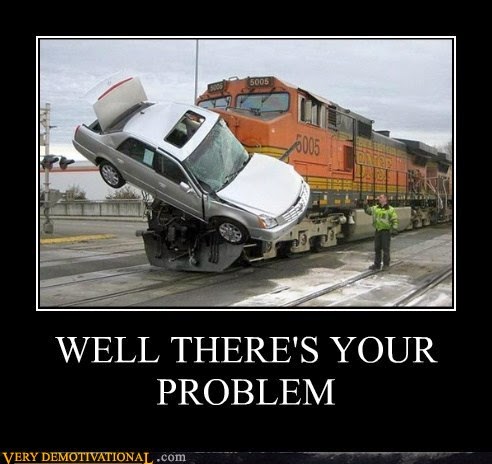 Posted by Blacksteel at 8:33 AM No comments: