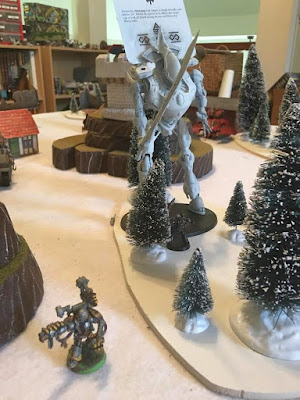 The Iron Warriors have returned to Tranicos and the fighting that began last night continues all day today! Taking no prisoners they are battling against the Eldar and are also setting up an action against the Ork hordes on the planet! Stay tuned for more details!

In the image above the Iron Warriors warsmith makes a tactical withdrawal while Plague Champion Helzarius takes on a Wraithknight one on one. His scarifice will not be forgotten!

Posted by Blacksteel at 1:08 PM No comments:

Investigations into a Star Wars Campaign 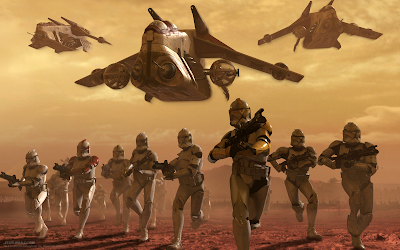 I got fairly obsessed over the past week with running a Star Wars game, which meant I fell down the rabbit hole of "which system should I run." I'm back now and feeling better and I actually ran the Apprentices through a kickoff session that I will detail (and link to) later.

My agony was in deciding between d6, FFG, or Savage Worlds. I have a bunch of Saga Edition stuff and while I like it I am getting enough d20 with the two Pathfinder campaigns I am involved in and I want to do something else. I asked the Apprentices what era they were interested in and got different answers so that was no help.

D6 has a ton of fan support for a game that's been out of production for 20 years.  One of the best examples is here - conversions of all the d20 material which covers the Clone Wars era and a bunch of other topics too. It removes the need to worry about the mechanical parts and lets me focus on setting up an adventure. There's a great Old Republic "Galaxy Guide" as well that's amazing in presentation and scope - that adds all of the characters, settings, and gear from the MMO to the option list as well.  I've always thought of d6 as mainly the "Rebellion Era Game" but between the Tales of the Jedi book and the ocean of online material available these days it is really viable for any era.


Savage Worlds is one of my favorite systems and it's pulp orientation fits the setting to a T. There are multiple fan created conversion guides and honestly any of them is probably a solid start to a campaign. The simplicity of the system removes a lot of the need for nitty-gritty detail on minute differences between types of equipment and vehicles and powers which keeps the focus on doing rather than shopping or leveling. I still want to try this but it might be overkill with Savage Rifts on the horizon. 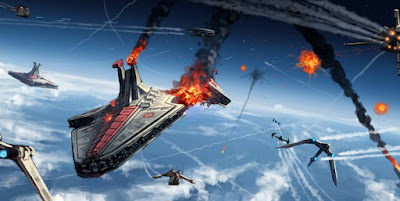 The third option was Edge of the Empire/Age of Rebellion/Force and Destiny which was a strong contender as we've played a few sessions with a beginner box last year and I've been picking up books for it recently. This one is a little more complicated.

The biggest problem is that I have players whose first choice is Clone Wars or Old Republic era and have a high interest in playing force users. Much like WEG used to be, but without the defense of "That's all we had", FFG caters entirely to the Rebellion era. Sure, you can hack a different setting, but that's not a terribly satisfying solution for a new game. If I wanted that level of effort/winging it I'd just do it in Savage Worlds. I'm surprised that in 3+ years of releasing material there's been no nod to the past eras for the game.

The production model for the game is also still an issue. I've heard the arguments for a few years now and for me it boils down to this: To publish a Star Wars game and claim that splitting smugglers, rebels, and Jedi into three different core rulebooks is being faithful to the source material is ridiculous. Every.Single.Movie. (and the TV series) Has examples of these character types running around together. Not separately, telling their own stories, but as a team - as an adventuring party. It worked fine in 3 versions of WEG Star Wars, it worked fine in 3 versions of WOTC Star Wars, and it would have worked fine here. Leaving aside the expense, having stuff spread across so many books is just cumbersome. A general core rulebook + a jedi book + starship book etc is easier to both acquire and pass around the table in my experience. It doesn't make it a bad game, it just gets in the way of playing it.

The other, somewhat unexpected, thing I encountered was ... attitude. All over the internet, particularly on the FFG forums and the associated Reddit pages I kept seeing a tone of limiting your players so they don't get out of control or break the game. If you're a Star Wars fan you may not believe the amount of concern expressed over giving a character a lightsaber, for example. Limiting their XP awards to very low levels was another - you don't want to give away things too fast! Forcing them to jump through hoops for all kinds of things just doesn't seem like it fits with this  For all of the narrative dice innovation good stuff I have seen I was not prepared for a flashback to the early 80's and The Right Way to Play AD&D rants that came up back then. It felt very much like a lot of people giving advice online are still in some version of DM vs. The Players and of all the games out there now this is one where I did not expect to see that mindset.

An example: I went looking for information on two-weapon usage, whether light sabers, knives, or blasters.

Why? Well, one of the d6 Jedi templates comes with two lightsabers but WEG doesn't really address using two weapons mechanically, and if I hand a kid a character sheet with two lightsabers on it he's damn sure going to want to use them together. So I poked around online for that and decided to check on how FFG handles it too. Savage Worlds address this in the core rules so I knew the answer there already.

For d6 there are several online forums, from the Rancor Pit to individual blogs to the d6 Reddit page,  On them I found multiple instances of the question being asked and multiple, varied answers from simple to fairly detailed, many of them based on actual play experiences.

For FFG there was some mechanical advice - it is addressed in the core rules for the most part - and a lot of "it's difficult as it should be" and "well first they would have to have two lightsabers ha ha" and a general attitude that that's pushing into minmaxer territory and that's not what the game is about! There was also a lot of "realism" arguments, which is laughable when you're talking Star Wars where ships in space make noise and fight like WW2 aircraft, wizard-monks use ESP and do wushu leaps while using their laser swords to cut through everything.

This kind of attitude just amazes me. I would think that if I was going to find it anywhere it would be among the old-timers writing answers to the old system that never really supported it in the first place. Instead, I find it among the fans of the newest game that does support it! Not all of them, of course, but enough that I thought I would mention it because it really puzzles me. I mean, Edge of the Empire gives the players a ship right up front. A jump-capable, armed ship. Age of Rebellion gives them two. Comparatively, a lightsaber seems like really small potatoes.

To take the somewhat negative taste away from this (I still like the game!) here's a link to someone breaking Rebels down as sessions of an FFG game. I liked it a lot. 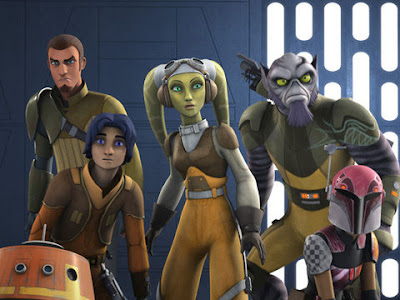 Conclusion
I still want to try the FFG game again and we will, Savage Star Wars too, but after my multi-day review I ended up back at d6 for this run. I know, it was kind of a surprise for me too. I had dusted off an old campaign concept and pretty quickly focused on how I could run it. It's a Rebellion era game so any of the published systems can handle it without tweaking but the d6 option just felt like the right way to go this time. I've wanted to give it another go anyway and now I get to take another look at a system I have liked for decades to run a campaign concept I started working on over a decade ago. Now this is a game I am only going to run when all 3 of the boys are home and available so it's going to be intermittent at best as that doesn't happen as much with Red off to college. Regardless, I ran the first session Sunday night and it was a big hit and they are still talking about it days later so I think we will be working to arrange session #2 pretty quickly. More on the actual game next time!
Posted by Blacksteel at 9:31 PM 4 comments: