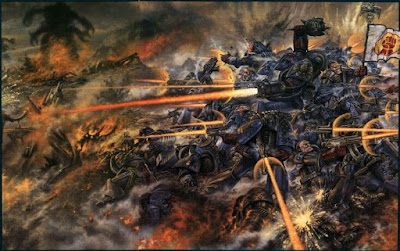 What a glorious week we had last week! Various leaks indicated we had some major changes coming besides just rules - equipment and statlines were both clearly in play with this new edition, and with one leak a day it built up interest and discussion until finally on Thursday we had the big reveal... 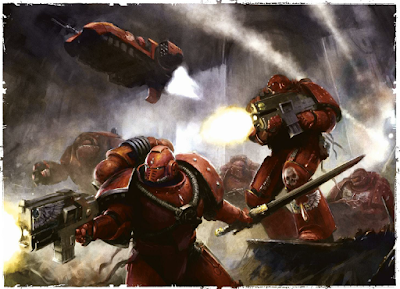 Classic marines are all going to 2 wounds! Finally! Space marines are finally making that jump to the elite force they always should have ben but haven't quite lived up to since 5th edition, at least.  Terminators are going to 3 wounds! Astounding! it appears as though marine units are finally going to live up to the backstory!

Beyond that we have flamers going to 12" range - which allows them to shoot after deepstriking, the various power weapons all getting a strength bump - +1S power swords are a very interesting option for a lot of my armies now, 2-shot multi-meltas should be decent, and heavy bolters going to 2 damage - yes! They are now pretty much the .50 cal in the WW2 American Army where they were stuck on every surface that could fit one, from Jeeps to halftracks to damn near every tank produced by the end of the war.

I have to say I really really like this reworking of the marines and their tools. It's going to be a fun and different-feeling edition for some armies that have looked pretty much the same for a long time now.

Then of course there are the other impacts - Chaos Marines are getting the same upgrades. CSM's finally step out in front of cultists! 3W Chaos Terminators! 2W Death Guard Plague Marines? 2W Berserkers? Oh it's going to be fun for the spiked ones too!

The weapon changes will spill over to the Guard and the Sisters and even into the Eldar armies as well.

So much to ponder with these updates! I expect I will do so right here over the next few weeks. 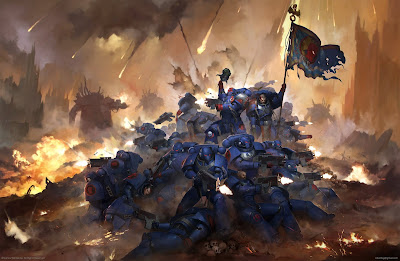 Posted by Blacksteel at 2:00 PM No comments: