We begin with the party camped in Room I of the Holmes basic started dungeon
Apprentice Red: Horace the Dwarf, Drazier the Elf, Skullduggery II the Magic User
Apprentice Blaster: Apollo the Elf, Logan the Fighter, and Steven the Thief
The group forms up and moves into Room L, where they find more of the underground river and a lot of glowing mosslike fungus. They tried all kinds of things with the fungus like smearing it on their swords or putting a patch of it on their shoulder, all kinds of crazy stuff - I love having new players - but it didn't really accomplish anything.
Then they step into the river and the giant crab lurking in the water attacks. Combat ensues, and in round 2 the crab scores a crit on Drazier the Elf (I go with max damage on a natural 20 for crits) killing the demihuman instantly. The rest of the party gangs up on the beast and kills it in round 3.
Pausing after the battle the groups strips the dead elf of valuables then tosses his body in the river and watches it go away (?! there's a city right over their heads ?! - new players!) then they skin the crab trying to figure out what they could do with the shell.
After this brief rest they move into Room K, a large room with more river and a pile of junk on one side. Apollo the Elf investigates and finds a skull with a dagger embedded in it, which he removes (Dagger +1, gold hilts, blue gem in pommel (100gp value) shaped more like a Bowie knife more than a regular dagger being a large single-edged weapon - probably Sea Elf work). Clearly fate is favoring him over his fellow elf in the party. The rest of the party starts looking for magical daggers too but finds nothing else of value.
Moving on, the party enters Room M and finds an underground lake, a beach, and 6 pirates digging a hole. They assume a hostile stance once they notice the party, which happens when the dwarf has another "Do you mean us harm?" moment as he calls out to them. The party says they just want to pass through the room As they can see what looks like an exit on the far side of the beach. The pirates are having none of this and refuse to let them through, telling them to "go around" and "this is our beach". Showing the beginnings of true old-school player attitudes, the group decides that no NPC is going to talk to them that way and charge! A 5 round combat follows (one of the longer ones we have had) and daggers are thrown, punches are thrown, magical weapons are used in anger , and no PC's die. New treasure is discovered, along with a hostage and some new house rules! Lemunda the Lovely, daughter of a noble in the city above, is freed and taken into the custody of Horace the Dwarf who intends to seek a reward. There is some argument over how to divide the treasure but it is quickly settled. After this the party decides to head back up to the surface to count their loot and level up.
DM Notes:
The party may be done with the starter dungeon as there was some talk of moving on. If they do they will be heading for the Keep on the Borderlands, east of Dragonport, near the Great Barrier Peaks. If not, they will probably find their way to the Crypt in the starter dungeon which should be a lot of fun. 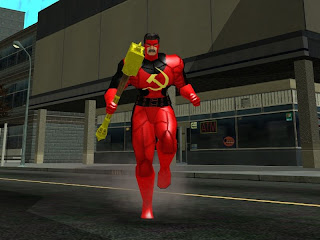 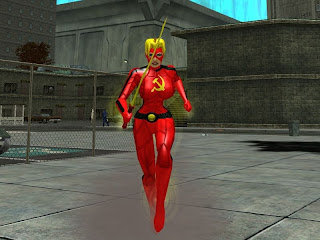 As our villains relax after their underground adventure, they get a call from Dr. Destruction informing them that the Red Hammer has returned and is killing V'Sori and their sympathizers very publicly, along with some other Omega cells as he apparently still considers the supervillains his enemies too. Additionally...
"I have learned that the Hammer's former partner, Scarlet Sickle, has been seen talking to him between his mad forays into the city. Sickle may be the only person who can reason with the addled avenger so I advise you to find her first. She lives somewhere downtown and Red Hammer may be with her. If you can convince her that influencing the Hammer to cooperate with us is the best way to help him, you may may be able to bring the mad mutant in without a fight. If not, use her as bait to lure him out then capture him and bring him to me. Failing that, kill him."
So the team heads out to try and find Sickle. Since the duo was once a part of a famous Russian super team, they start by locating the best Russian restaurant in the city and watching/making some inquiries. They know what she looked like in costume, but they do not know her secret identity - then again, how hard can it be to locate a 6' blonde athletic woman with a Russian accent?
Our team's investigation approach is not subtle - Nissa mind controls the bartender and holds up the picture above, asking if he has ever seen a woman like this but not in these clothes. He replies that yes he has, because he has internet. Frustrated by the language barrier with the young immigrant, Nissa orders some drinks for the team then feeds on him behind the bar.
NightBlade does better with an amazing display of skill (and some 30-range rolls from a d4 streetwise skill!) and the hostess points out Countess Kuznetzov who comes in at this time every week -and there she is now! The countess admits nothing at first and resists a glamour attempt from Nissa (finished with her snack in the bar) but finally admits who she is when MegaStrike appeals to their common Russian heritage and the shame of not taking a more active role in Hammer's situation and the invasion as a whole.
Sickle sighs and admits that she was severely injured in her last battle with Dr. Destruction years ago and had to learn to walk again - her heroing days are behind her, though she does still have her gear. She married a wealthy aristocrat and retired. She hates Dr. D more than anything else fro what he did to her and Hammer. She has heard rumors that he has something to do with the resistance and secretly hopes Dr. D will intervene personally so that she can team up with Hammer one more time and destroy him.
The team convinces her to lead them to Hammer's location to try and get him some help before the V'Sori take him down. They are careful not to mention anything about Destruction. She leads them to an Overpass where a group of homeless men apparently live, one of whom is Red Hammer. He is clearly disturbed ranting about aliens, villains, and the Doctor. The party struggles with their limited social skills to convince him to come along and has no luck until Nissa once again manages to glamour him into coming along quietly (there were some very strong rolls tonight).
Along the way the villains ask Scarlet what exactly happened in that last battle with Dr. D. She describes Hammer's attack on Destruction and that the mastermind hit him with a strange beam that she had never seen before and he disappeared with a flash. She assumed he had been disintegrated and she went berserk. She managed to crack D's armor and then he went into a rage that led to her being beaten into unconsciousness, with massive injuries and many broken bones. He took down several other members of the Russian team that day and they were never the same afterwards, disbanding a short time later. In his rage he went strictly physical, dropping his various beams weapons and using the raw power of his armor to physically beat down their entire team.
Having contacted Destruction on the way to the warehouse contact point, the Dr. is waiting when the team, the Red Hammer, and Scarlet Sickle arrive. As soon as he steps out of the door, the Russians start to go into a frothing rage, breaking Nissa's control, but before they can do anything Doc hits them with a beam that freezes them in place, then walks up and shoots them in the head with a blast from his megablaster, killing them both. He tells the team "I was listening to your conversation on the way in - they were beyond help, and we don't have the luxury of imprisoning them or trying to reason with them. You did an excellent job here, it just didn't work out."
He went on: "They would have been a powerful ally for our movement. Despite the outcome here I am impressed with your work. I would still like to try and bring in another powerful ally and I would like your cell to take the lead on it. This time we will recruit an old villain, so he should be a little more open to contact from us. You'll be heading to Japan to bring back The Monolith."
DM notes:
Posted by Blacksteel at 11:00 AM No comments: 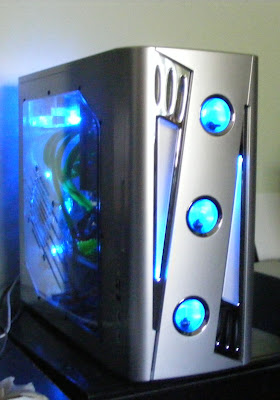 ...it's time to get back in the swing of things. We've actually made it through sessions of NE, Basic D&D, and D&D4 so I have a few things to discuss. Part of the downtime was to build this, so the net-cruising should be even niftier from now on. Not that y'all will know the difference, but it helps me out a bit.
Posted by Blacksteel at 9:30 AM No comments: