Pathfinder - Giantslayer wraps up and some general Adventure Path thoughts. 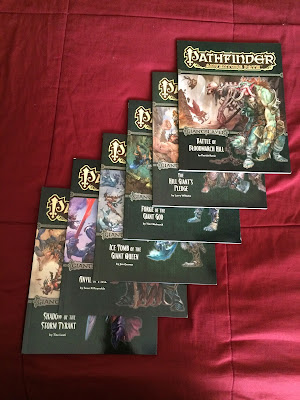 The Giantslayer adventure path for Pathfinder is now complete and it spurred some thinking on my part.

First up, it looks like a lot of fun. I have not read the entire thing (nor have I read anyone else's reviews) but I have skimmed it and it looks like it is nicely paced with a lot of interesting encounters beyond "...and here's a room with 5 frost giants". Considering it ends with an assault on a storm giant's flying fortress with dragons etc in the mix I'd say it reaches an appropriately epic conclusion.  It's definitely on the "I want to run this" list.

The only problem is that that list now includes:


With an honorable mention list of
... and that's just the published full campaign stuff for this one game! It leaves out some homebrew ideas I have, some of the standalone modules type adventures Paizo has released, and a potential Scarred Lands revival (one of our favorite settings for 3E D&D). Considering each AP is taking my group a good 2 years to complete (not that we've completed one yet) I could run nothing but Pathfinder stuff that looks interesting to me right now for the next ten years and not run out of material.


One of the good things about Pathfinder is that most of the people working on it have been at it for a while now and the company has put out a lot of material and received a lot of feedback on that material, so they know pretty well what they are doing when it comes to everything from structure and pacing to mechanics. That hasn't always been the case but it's definitely a plus for PF at this point in its life.

At some point though I wonder if it becomes a negative in a weird way for some people - "there's just so much" - or the need to "keep up" with the steady flow of PF material. I'm not talking about rulebooks here (which comes up with other games too) - I'm just talking adventure material. At some point does the ocean of Pathfinder adventure support become a reason to throw up one's hands and walk away? A lot of RPG's have had a single Metaplot campaign from the publisher and maybe a starter adventure or two, and PF is far, far beyond that.

Then I contrast this with the 5th edition D&D buzz that I see online which is almost universally "we want more" and ... I don't know. There are at least two extended AP-like hardback campaigns for 5E with a 3rd on the way, with minimal rules expansion, and it seems as though many players think that's too slow a pace for them. I even see a fair number of comments that some 5E players are converting Pathfinder AP's to 5th edition. So maybe you can never have too much when it comes to adventures.

I've also wondered at times if too many "official" adventures can dominate the flavor of a game, changing it from something the players own to a thing where the corporate plotline is the only generally accepted way to play. I think most versions of D&D were good about avoiding this but other games (Shadowrun comes to mind) seemed to get hung up on the metaplot and ignored a lot of interesting corners of the setting or concept.

Surprisingly PF has not felt this way to me because while there are a ton of adventures there is no metaplot! All of these AP's are largely independent of one another so there isn't some singular evil force trying to take over the world and while many of them are certainly region-threatening, many of them fall short of world-threatening, which makes the whole place interesting and exciting but not ridiculous.  It's sort of like a comic book universe in that there is a lot of big stuff going on independently and only rarely do we see crossover type impacts - but when we do it's a big deal.

Also, unlike many campaign settings, while there are quite a number of known villains/bad guys/threats there are almost no heroes built into the lore. That makes it the whole thing a story waiting for a protagonist to come along. Compare this to Greyhawk, Glorantha, the Forgotten Realms, and most IP universes where there are a bunch of hero types already in place and Golarion (the PF campaign world) feels a lot more fresh, open, and ready to be used by players. 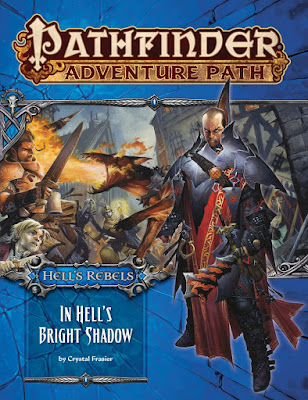 As much as I have liked the past few years of Adventure Paths I am uncertain of the future for a few reasons: