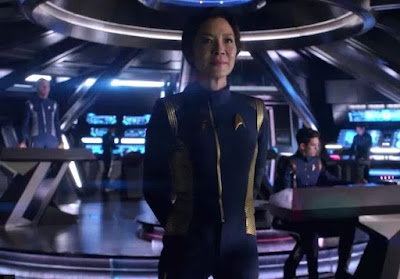 So, Sunday night we got new Star Trek! That's a good thing right? In the past that's mostly been true I would say. This time? Well ...

Short version: I liked it more than I expected but not enough to sign up for their service.

There's a lot of mixed good and bad in this show, even in the first episode so I'll try to break it down like that:


So I don't think it's a disaster. It does make an interesting contrast with TNG as a relaunch of a once-popular show years after the last run. Especially since I've been watching that series again with Blaster on Blu-Ray. There is a lot more of the high-minded Federation in that pilot and early shows but here they do at least acknowledge that the Federation doesn't fire first.

Despite this cautiously positive first impression I'm not going to be seeing the rest of it, at least not for quite a while. Yes - now we get to the unavoidable "method of delivery" debate. I understand what they're doing - if you want to really launch a new service then you need a high profile flagship show to do it with and they've chosen Star Trek for that role. It's perfectly logical and understandable.

That doesn't mean I have to go along with it.

It's not even really a financial call. It's what, $7 a month? I spend more than that on lunch on a weekday.

Star Trek has always been on free over the air TV. The original airings and the re-runs have always been pretty freely available. If they were moving it to another delivery channel because they wanted more creative freedom - say HBO - then I could understand that and even get on board with it.

But I've seen nothing about that.

All I have seen are comments about using it to promote CBS All-Access. That's great for the people who own Trek, potentially, but does it make the show better in any way?

I'm not angry about it. I've seen the flamewars on social media where super-invested fans take it as a personal affront. That's not me at this point. I'm looking at it as "that's fine, you go do your thing over there and I'm going to go do my thing over here and maybe every once in a while I'll check in and see what you're doing.

Also, I'll be watching The Orville. Because while Blaster and I were dying during the pilot even my wife was laughing, and she is not a Trek fan at all! So I have 5 more seasons of TNG to watch with my kid, then we'll probably go back and watch DS9 as well, plus we have a Trek parody show that's current, and then maybe I'll check in again on Discovery.
Posted by Blacksteel at 12:00 PM 3 comments: