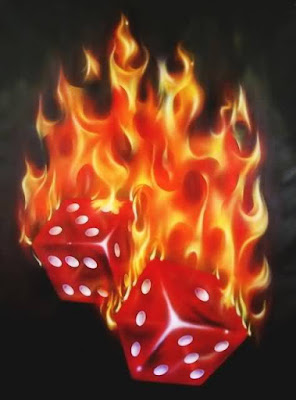 I was listening to a podcast the other day. One that I like and listen to regularly which has a recurring cast for most discussions along with a guest or two. The guests are often on to talk about a new product they have created. That was the case here and it was all fine until the crew asked the guest if he would return to run a session of the new game he was promoting. Suddenly it got all awkward and he sort of laughed and said no, because he hadn't run a game in at least ten years!

He actually said "We get too busy writing to play" - No. That's not acceptable. Why on earth would I buy a game from someone who can't even be bothered to run it themselves?!

Apparently he's working with other people to make the game which is based on a book series he's writing which is inspired by his love of superhero tabletop RPG's - presumably from before he started writing books.

Now it's acknowledged on the show that it's a common problem with game writers and I have heard that before. "Oh we're so busy" - bullshit. I have 4 kids with all of the usual activities , a full time job that shoots significantly over the 40 hour per week standard, a wife with the same kind of work scenario, and all of the usual adult responsibilities. We still manage to find time to play boardgames, RPG's, miniatures, go to movies and concerts, watch a little TV, and enjoy a few other hobbies as well. Maybe not as much as we like  but we still somehow manage to do these things. I'm not one of those "oh I'm so busy" martyr types that love to humble brag and that's why I don't talk about it much here - I assume everyone is fairly busy. If you're going to throw it out there as this kind of excuse, well, it's B.S. as I said above.

So no, if you wanted to find time to play games, even as a busy game designer, you would find the time.

You know what I think it is? I think you've turned "game night" into "work" and so ruined one of your hobbies. You have a hard time playing for fun now because it starts to feel like work. That's a shame.

I think they should put a warning label on games like this:

"This game was a 'labor of love' by the writer. This means it soaked up all of his free time and thus was not playtested at all."

Even playing it during "work" counts - at least you were playing it and presumably someone else was too.

Writers need editors. Game Writers need editors and they also need players - players beating on their design to see if it makes sense to someone living outside the author's head! I've had some problems with Paizo these last few months but at least I hear them talking about their lunchtime games and other games where they are playing the stuff they're working on! I may have questions about how much playtesting those Pathfinder AP's get but they do get something and the people working there do seem to play Pathfinder and other games. The Savage Rifts guys were going around playing test games at cons and in private before finalizing the design. WOTC's podcasts and articles tell us what they are playing as well.

How much is enough? I don't know exactly, but for a typical adventure I'd like to see at least three different groups try them out. Not a bunch of people that all know each other either - one in New York, one in Texas, and one in California would do quite nicely. Europe, Asia, and members of the military would be great too. I would think that three would find the worst misses and loopholes and unanswered questions. For a game system I think a lot more would be needed - Pathfinder and 5E both went with the open playtest and I think it yielded incredibly strong results, both in actual mechanical results and in setting expectations. Hopefully the new Trek game is benefiting from their big playtest too.

Additionally, I'd like to see game writers and designers playing games other than their own. It's amazing how narrow a perspective can develop from only playing one game. I see it on message boards all the time and have for years. People asking a question about a new game that clearly indicates all they've ever played is a particular game, likely a specific edition of a particular game. The fun part is when they realize that not every RPG has classes and levels. Or a percentile skill system. or uses a dice pool. Or that cards may be involved in some way. That "oh" moment is a great one. It's good to know there is more than one way to do something. It's not just an RPG thing. You see it a lot in the miniatures scene too, usually when a 40K player encounters a different style of miniatures game.

To wrap up - if you write games but do not play or run games, and I know this, I am automatically less interested in your stuff than I was. Are you writing a book or are you writing a game? If you're writing a game that is meant to be played by a group of humans then you need to be playing it. Having a good idea isn't enough. Play it! Run it! Polish it! Refine it! Make it something we can actually use and not just read. Because if you can't be bothered to play it, why should I?