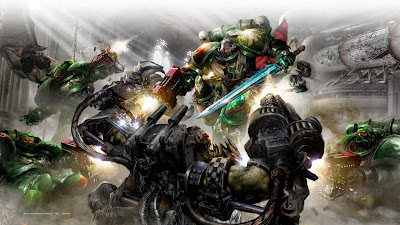 Well first there is this:

Nothing urgent here but it will be interesting to watch. I thought with the success of the Dawn of War games and the Space Marine game that we would be seeing more 40K video games and apparently we will be. Maybe this one will actually make it.

In last week's post I mentioned using a "known" paint scheme for mini's can make it easier to find drop-in units that much easier. See above for an illustration of this principle in action. The expansion of the-army-of-which-I-have-not-yet-painted-a-single-figure continues, now over 3,000 points (6E). This kind of thing is also easier if you do it with a smaller, elite type army like Deathwing or a Grey Knights force. Adding one more IG infantry squad or ten more Boyz isn't quite as exciting as adding another Terminator squad. Trying to match paint jobs over that kind of large force can get tricky too.

I admit, the not-painted-by-me thing has kind of turned into a Thing. I have armies where I have painted every single figure, but over the last few years I have added in a few painted units to many of my forces and now I'm taking a perverse pride in having a cool fun army that I did not paint at all. I used to have at least a 15 point disad of Code Against Using Mini's Painted by Others" but I have mellowed over the years. Ebay is seductive, and feeds a combination of "busy-ness" and "cheapness".

The schedule is such that I have to make painting a priority so I tend to crank out a lot of progress over a week or so then I may not touch a brush for months, then I do it again - a sort of binge painting approach. I'd like to have a nice steady progression of painting on a regular schedule but I have not been able to make that happen. Our life is a series of competing priorities and the toy soldiers regularly lose out to family, work, friends, and other hobbies. Adding painted stuff improves the army without adding to the backlog of paint work.

Then if you take a stroll through ebay you quickly realize "hmm, I could head over to a store and give GW $50 for this terminator squad in a box that will need to be built and painted, or I could give someone else $20-25$ for one that's already built and painted and matches my existing army." Let's see it's cheaper AND it looks like it belongs? Now I like building and painting but this is not a difficult decision to make.


It does take patience to find those units. Unless you're playing Space Wolves - they have Eternal Warrior in ebay terms, there is no doubt, and everyone paints them in the same scheme, right own to the snowy bases! Ultramarines are pretty common too, as are Blood Angels and even Dark Angels have seen an upswing since the new codex came out. My main vanilla marine force is Crimson Fists and you see a few here an there but not a ton. Imperial Fists are not super common but they're all pretty much painted with yellow Army Painter so they almost always match pretty well.

Besides marines I find Orks and Chaos are pretty forgiving when it comes to adding in pieces and parts. They both tend to be messy so variation is expected, not derided. Necrons tend to mostly come in that standard "silver drybrushed over black" scheme too, making them easy enough to work in. The two I find to be the worst are Imperial Guard and Tyranids. 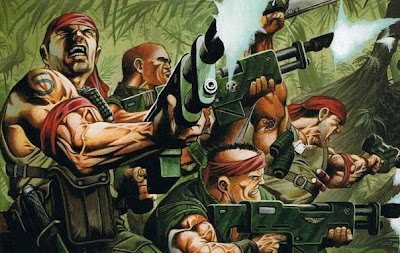 Imperial Guard is hard because I want them to look like a cohesive force, and it is difficult, once you have nailed down a paint scheme, to find matches for it because everyone does things a little differently. Even Catachan Jungle Fighters, which for years were basically green fatigues over flesh. What shade of green? You wouldn't believe how much variety there is in "green" until you try to get an army of orphaned Catachans to match up. Orks tend to have a lot of green too but there it's overcome by the clan color a bunch of black or red or yellow in really bright shades can effectively unify an army even if it has five different skin tones. With the guard, the green is supposed to be the unifying color and I eventually gave up on it. I don't like "generic" guard much anyway, I have to have a theme, so it's probably better that  I paint (or repaint) them myself. Right after all of the marines are finished ... 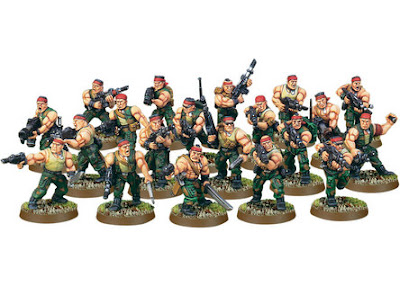 For Tyranids I have a similar problem - if it's one big brood invading a world, they should all look similar right? At least all of the 'nids fighting in this battle right here should like alike, right?

When they first came out they had a fairly standard color scheme of blue and purple and red. 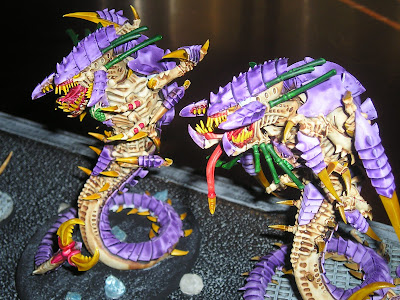 Then with 4th you started to see more bone colored parts showing up. 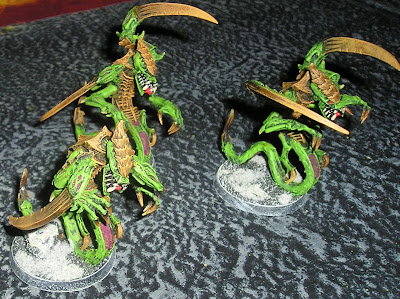 Of course some people do interesting schemes away from the "standard" colors too. All this leads to a remarkable diversity of color schemes, usually done at an army level. It also practically guarantees that you will never find a unit that truly matches what you already have. This creates a temptation to go all-in and buy a fully painted army, at least for me, but then it better be one I can reasonably match myself because, hey, what if some new unit comes out that I want to add to my army? This has put me off from doing it so far but you never know.

So to a veteran game I would say: consider it - depending on your army this may be a viable way to add things without losing your mind.

To a new gamer I would say: This isn't the best way to build your first army, but it's a great way to build your second or third. You may suck at painting and building and all of the things that go along with physically building an army, but here's a little secret: everybody sucks at it when they start out. The way you get better at it is to keep doing it. The 10th marine you paint will look better than the first, and the hundredth will look even better than that. Don't give up on that part of the fun just because those first few attempts look like someone melted a crayon over your trooper - it gets better, and it gets better fairly quickly if you keep going. In the meantime if you have some extra money and are looking at starting a second force then painted units are a great way to go. Playing with painted armies tends to drive me to paint even more and a I know others who feel the same way. Go ahead - it's OK.
Posted by Blacksteel at 1:38 PM No comments: 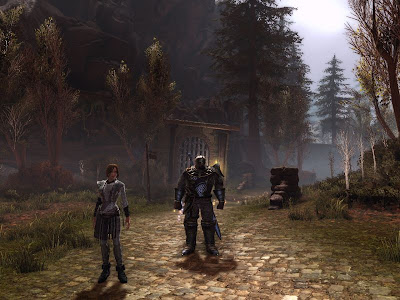 So we're trying a new schedule here for the summer. Hopefully it will give us more time with the Apprentices or at least let us do a little more while they're here. Besides various outside stuff (and work and band practice and drama stuff and soccer camp) Game-wise this is how things look at the moment:

I also suspect that some new obsession will grab hold and take up some of this time as well. Deathwatch was noticed again recently, as was Deadlands, so either of those might make a comeback. One interesting thing is that we could theoretically play several times a week, setting up the possibility of starting and finishing and adventure for one game one week, then doing something else the next. I have to think about that one some more. It's been a little slow around here lately so there hasn't been as much to post but I expect that to change shortly. 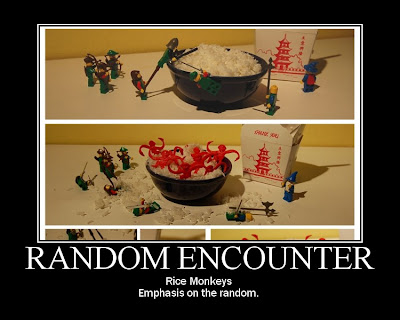 Posted by Blacksteel at 9:20 AM No comments: