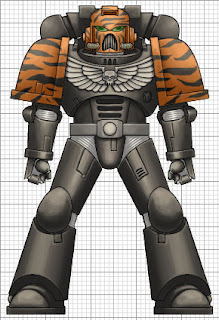 This post is in recognition of a man who is as motivated and dedicated to a concept as anyone I've seen in gaming circles. His site has been on the net for over a decade and is still updated regularly.

This is an example of what you will see: 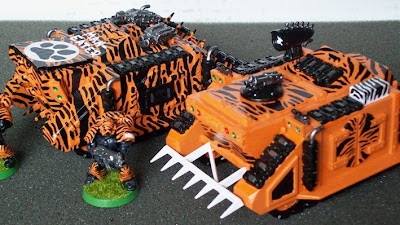 The creativity to come up with the backstory and details that he has written up for his chapter is more than I have seen for some entire role playing campaigns - just check out the Codex. The dedication to stick with it for two decades  (plus) sends it over the top. I know he started playing around the same time I did - when 40K first came out - so this is not a one-off burst of creativity - this is a sustained run that few of us experience.

I've considered painting up a squad of tiger marines to let them make a guest appearance in some of my games but I don't know that it would feel right. If I ever run a Deathwatch campaign though, you can bet they will be making an appearance of some kind. They may show up in the next Sci-FI or Supers game I run if I need a fighting force from a distant world.

Anyway, when I started awakening the troops again this was one of the first sites I checked and yep, it's still there and still seeing updates so I wanted to give it a tip of the iron helmet and pass it along to anyone else who might be interested and inspired by its greatness.
Posted by Blacksteel at 12:00 PM 2 comments:

Monsters are discussed here. There's not much to it but there's a survey here:


Here's a discussion of playing with and without mini's complete with a description of play I'm pretty sure I've read before. There's a survey on it too, but it's only one question.

It's not as bad here but there does seem to be a prevailing opinion that if you use mini's then you automatically prefer detailed tactical rules. This is not always the case because we were using mini's way back with AD&D when there were not a lot of detailed tactical rules - facing was about it, nothing comparable to 4E's battle maneuvers. This does impact the rules however because if you assume a grid is part of the game then you can add all kinds of mechanical options that interact with it. Without it, sure, the game will play faster, but it severely limits what kinds of rules you can build into the game. That said, if they start with "theater of the mind" as the default assumption, and add a detailed grid-based module later, I can probably live with that. I expect my 4E campaigns will run well past the launch of Next anyway, so it's not super-critical to me.

Here's a discussion about colors and D&D...and a survey asking what color the logo should be. They are really taking this player feedback thing pretty seriously eh?

Rule of Three answers some pretty mundane questions this week, no strong feelings about any of them here.

Not a lot of excitement this week. If you're let down by this take a look here. If you haven't seen it before you will like it; if you have it's probably been awhile and worth watching again.

That's all for today!
Posted by Blacksteel at 12:00 PM No comments:

Prize of the Weekend

It was a pretty good weekend - it was a kid-free weekend* - but one of the high points for me was finding this on Saturday. 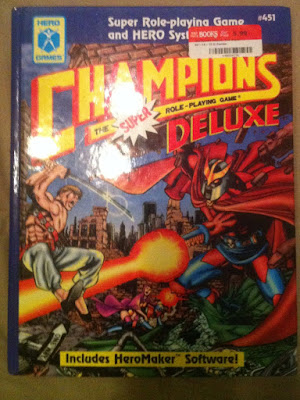 Been looking for one of these. I have the original hard cover and the softcover editions (you can never have too many copies of a Hero System rulebook around the table) but I have not owned a Deluxe copy. 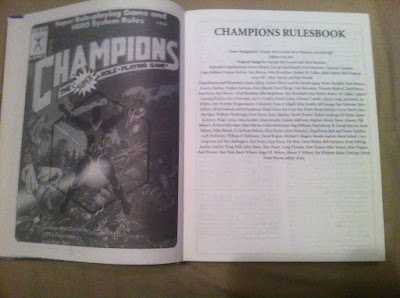 They call it "4.2" inside with the original hardcover being 4.0 and the softcover/Hero System Rulebook being 4.1. This edition came out in 1995 back when 4th was current and pretty popular. There's some error-fixing and a new graphical approach inside. Nothing earth-shattering but it is funny to go back and read through a book you've perused hundreds of times and find that it looks different on some pages. The real prize was this: 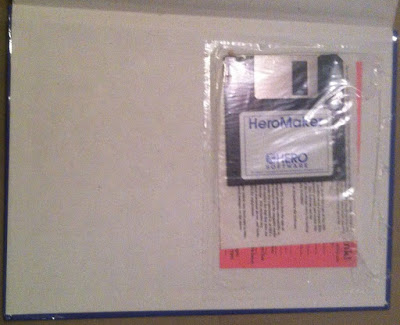 Yep, it has the HeroMaker disk still in the back. I've been looking for that for a long time. Before you ask, yes, I do have at least one old PC floating around that has a floppy drive. So that's the next experiment for the week - does it work and can I use it to make characters? We will see.

*One of the benefits of being a "blended" family is that we get some grown-up-only weekends, usually at least one a month, and scheduled well in advance. There are silver linings to most things, you just have to look for them. Also, choose a good lawyer.
Posted by Blacksteel at 12:00 PM 4 comments: 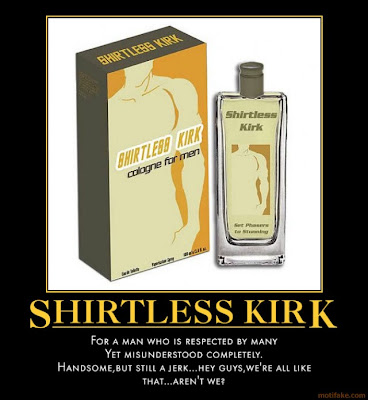