So, with Spring Break comes the chance to get in some game time and Wednesday night was a 40K night. Apprentice Blaster and I put together 1500 point Eldar armies and went at it

We ended up with a Hammer and Anvil deployment (this always makes things interesting as we tend to set up the terrain with an eye on the more standard Dawn of War deployment) and the keep-your-cards-secret Maelstrom Mission.

It went badly. As a hint, in the picture above, Blaster is already moving his forces for Turn 1 while I have yet to move. An idiotic deployment mistake on my part led to half of my forces on the board being erased - scatter laser jetbikes are unforgiving of mistakes. My aspect host Scorpions were in a good position to try and reverse some of the misfortune but managed to fail a morale check then fail the re-roll too! On leadership 9! So they fled out of their stealthed + shrouded + ruins position, headed across open country for the back of the field.

On my first turn I re-positioned what was left and my Rangers managed to kill 1 bike. That was it.

Turn 2 he killed the rest of the Scorpions, the Wraithguard, and the last Farseer. I had another Wraithguard unit and a Dire Avenger squad off table, both in Wave Serpents, but I could not see a way to salvage anything so I conceded. Bleah.

He did exactly what his army is built to do and I made it a whole lot easier than I should have.We may work in a rematch this weekend.

Next up: Apprentice Red is down for Spring Break and asked for a big fight with his Orks. So later today we're set for 3000 points of Orks vs. 3000 points of Eldar. More on that later. 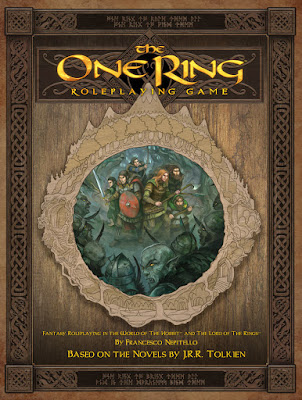 Little late to the party on this one as I am off with the family for Spring Break but wow! Details here.

Love the books, never loved the RPGs, heard a lot of positive things about The One Ring but I've never read or played it. I've just never felt the need to run a game set in Middle Earth but if I encountered a motivated Dm I'd be happy to give it a try. There are a lot of things in D&D that would have to be altered to make it fit but this could be an interesting read at least. I'm interested enough to follow the project. Maybe something cool will come out of it.

Posted by Blacksteel at 2:10 PM No comments: