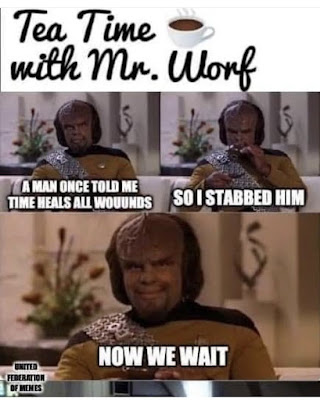 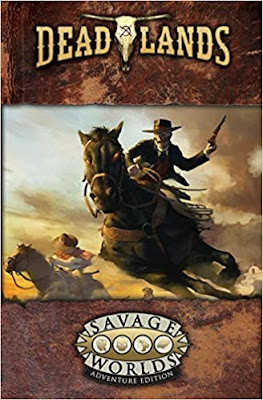 Deadlands! It's hard to believe it's been around for 25+ years now. Those bright orange covers are just as electric sitting on my shelf today as they were back then and the concept is still just awesome. Just to review:

So right there we have 5 different versions of the game where the mechanics have changed every time but the setting has remained the same - other than timeline updates - and that's a good thing because the setting is a damn strong one for playing an RPG.
Now Pinnacle has released a new version of Deadlands with both a rules update to match all of the changes over the last 15 years, especially the new Adventure Edition of Savage Worlds. I figured I ought to look it over and share some thoughts.

First up let me say this: If you're interested in the game but either haven't ever played it before or sold off your stuff years ago this is really all you need to worry about - the new core book for Deadlands pictured up top. It's a great entry point - or re-entry point. It does a thorough job of talking about rules tweaks for Savage Worlds, it does a strong job of covering the setting and the history and why things are the way they are, and it also does a really good job of explaining what the game is about. That last one is something not every game does well or even tries to do at all and I think this book covers it well.
I'm not going to do page counts and go chapter by chapter - let's take a larger view:
It's a solid, solid presentation of a really fun setting and it's the best looking version of Deadlands as well. Pinnacle has gotten really good at presentation and I would say this is their best effort to date. 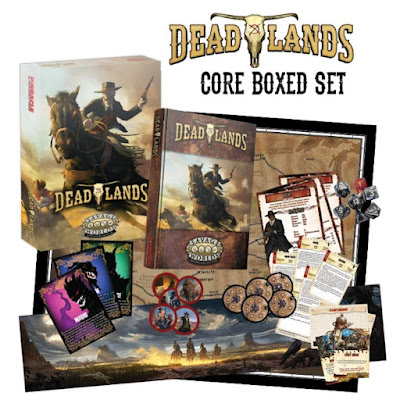 Now there is a nice fancy boxed set with a lot of cool stuff in it - that's it up there - but you don't need anything in it to run the game. It's a lot of themed nice to have stuff and I ended up getting it but it's all bonus - nothing essential.
One thing is that the timeline has advanced and there are several reasons for this. The original game started in 1876 and the new version sets the time to 1884. The big change is that the Civil War, which was ongoing in all prior editions of the game, is now said to have ended in 1871. There is an in-setting explanation for this retcon and yes, some people in-setting do know that it changed so it's not just hand-waved away. The larger reason for the change is that having the Confederacy as an active part of your RPG setting nowadays is going to bring some negative attention, especially when you've already messed with the historical timeline. I'm not sure I would have handled it the same way they did but I can understand why they did it.
The other impact of the timeline jump is that it is now assumed that all four of the big servitor plot point campaigns were completed - The Flood, Good Intentions, Stone and a Hard Place, and Last Sons. I suppose it makes sense but if you were running or intending to run any of those you're going to have to reconcile the "when" of things a bit here. I am still going to use them and I'll just be setting things back a bit and starting my games in 1879 or so. 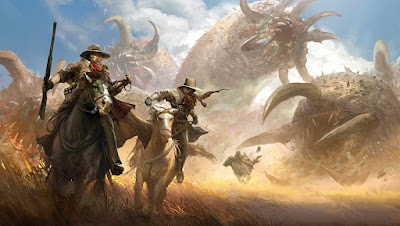 So I love this setting, I love how Pinnacle has handle it over the years, and I am a big fan of Savage Worlds and have been since it came out. That said I have two issues ...

One, I saw an online discussion wondering if this update took too much of the conflict out of the setting. The Civil War is over. The four big Servitors have been thwarted. Pinnacle is taking a different approach with this version and focusing on smaller scale local problems with their campaigns making for less metaplot and making it more about your group of PC's cleaning up a town or a region. Is that what people want? Most D&D type games seem to focus on publishing big time epic save the world adventures for full campaigns. I don't hate the idea of scaling it back and I think a western game is the right setting for saving the town - or the ranch - whether it's from the greedy land baron or a pack of werewolves. That said there is a bit of feeling like maybe the big story already happened on some level. 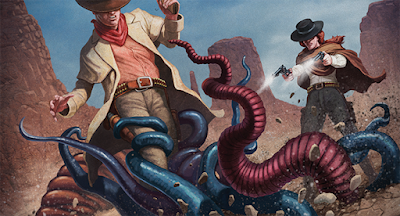 My biggest annoyance, and it is a small one in the larger scheme of things, is the "Twilight Legion". Yet another in the growing line of "retconned organizations that hand out missions to player characters in a setting that doesn't need them". It's been creeping in since at least The Flood and now it's a full-blown default assumption that your players will inevitably join the secret organization that's been fighting a secret war in secret since medieval/ancient/the dawn of time(s). We played in this world for a decade or two before this became a thing - why do we need this now?

The argument is usually that it's an easy hook for new GMs and new players. Sure. Let's just have someone tell them what to do. Since when is that how RPG's work? For a Trek game sure, it's fine. For a western? With zombies? Does the GM not have any ideas here? Do the players not have any?

I would say it's just an optional thing discussed in the book but I've seen two of the new adventures published for this edition and they both assume that the party is working for the Twilight Legion. With one of them you might as well be part of MI6 - "Hello 007. 003 went to Malta last month and has not reported in since arriving. We need you to go and see what has happened to him" - it's pretty much a cowboy version of that!

It's heavy handed and it's lazy. Star Trek gets away with that because it's built in. In Star Wars the Jedi Council might ask some Jedi to investigate something like a trade dispute. You are creating characters or a whole party that is tied to an organization. In Deadlands we usually end up with a gunfighter, a huckster, a mad scientist, and some other random character type. If you create a Ranger or a member of The Agency then you have some baggage and strings but you knew that going in. Assuming at the start of every published adventure that the party is a member of the legion and is obligated in some way to do as they are told is just ... lazy. No need for interesting hooks. No need to write up different reasons for different characters to want to get involved. No need to invoke family connections or contacts or rumors or Hero-style hunteds. No need to get creative here at all.

Sure, a good GM can (and likely will) come up with an alternate approach. My point is that you shouldn't have to by default. There should be a little more effort in the kickoff than "mission received". 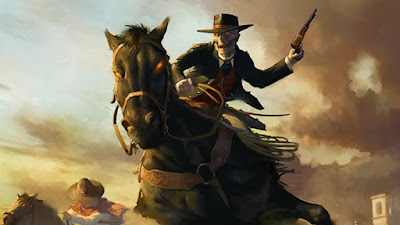 Now I don't want my rant to drive anyone away from this game. For one you can work around it and also, if you don't run the published adventures then it really doesn't matter. I usually try to work them in when I can but I'm not sure about these right now.

To reiterate: this is a great setting with excellent support and a tight very playable set of rules. I've found that it's very difficult not to have a good time with this game. If I can get one going again soon I will be posting it up here on the blog.