Sentinels of Earth Prime and Kickstarter 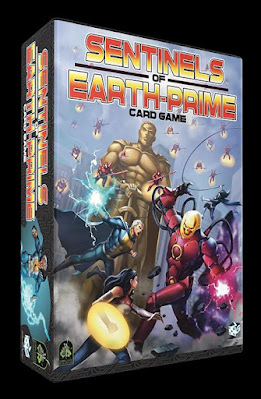 Well, look what finally arrived on my front porch over the weekend! I say "finally because, well ...

Yeah ... that's straight from the Kickstarter page. That was set for a year after it funded, which seemed entirely reasonable. Actual delivery date: End of February 2022.

This really seemed like a slam dunk - see my original post on it here. See? I thought this sounded cool. Ask me how I feel about it now ...

Slam-dunk-wise this idea was to take the mechanics from Sentinels of the Multiverse - a well-known and well-liked game - and the setting from Mutants and Masterminds - another well-known and well-liked game with 15 years of development at that point - and make a new flavor of something cool. Both of these companies had been steadily releasing material, it looked like they had a plan - how did this crater so badly? How was this anything but a straight-up win? I don't know for sure but I have some ideas.

Splitting the effort across two small companies may have complicated things way too much. Greater Than Games was doing the mechanics even though Green Ronin was publishing the project overall. GTG got bogged down in finishing up their big finale module for SoTM (which ended up being 18 months late) and that pushed the rules work on SoEP back. Here's a KS update from 2018 where they already know the game is going to be a year late. Then here's another update from later in 2018 where they announce that the rules are finished. Alright, if the rules were done three and a half years ago why are we just now seeing the game?

Art is apparently hard. Like really hard. M&M has really good art and they wanted to maintain that standard - and I get that - but apparently they were not going to use any existing art ... they wanted it to be all new.

Also the art had to wait for the decks to be designed to make sure it made sense for the card. I get that ... to a point ... and here is a 2019 update where the delays and the approach and the process are described. At that point they mention that they are in the final art order and yet that was still two and a half years ago. Then, more than a year later (Nov 2020) - hey! The art is done! So it took TWO YEARS to get the art for this game done after the rules were finished. I mean, I love M&M's art style but ... does it take two years to make the art for even a big book like Freedom City? And that was on top of the original year-long delay getting the rules written.

At some point one starts to wonder if they couldn't have just written, tested, illustrated, and published their own card game in quite a bit less than five years time. I know, once you've made the deal for Sentinels with M&M characters and taken people's money you can't just change the deal but hopefully some things can be learned form this.

And no, I'm not giving allowances for the pandemic because this should have been done well before the pandemic ever started. That is a good example of why you don't want to get behind by a year or more on these kinds of things - sh*t falls out of the sky sometimes and disrupts your plans. Those first few years of delays though were all self-inflicted. Something that funded in 2017 and was due in 2018 doesn't get to claim "Covid".

Side note: In the time between the start and finish of this project SoTM designed, launched, and published a second edition!

Second side note: In the time since I paid for this I backed 19 additional kickstarters, mostly RPG stuff. Only one of them came anywhere close to this kind of delay. 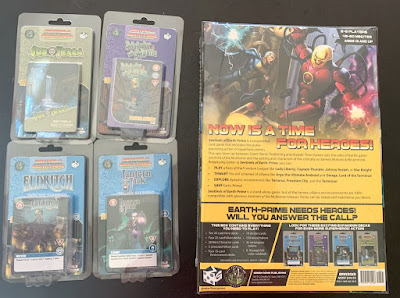 The counterpoint in some ways to this is that I paid $40 for all of that - the listed price is $50 just for the main game. Remember when Kickstarter was kind of a deal? Nowadays it seems like it truly is a preorder system for things that would have been made anyway, particularly with Card or Board games and RPG's. I'm pretty sure Munchkin Batman would happen regardless of KS funding levels. I doubt Pinnacle is going to stop making Deadlands books anytime soon. And you typically get to pay the equivalent of full MSRP! And then not get your product for another year! Well, maybe a PDF ... but that's not what you paid for is it? I've cut way back on the number of Kickstarters I join - only 1 of those 19 I mentioned above was in the last two years. It really has changed and given a few experiences with things like this my policy is "let me know when I can buy it in a store or online" - I'm looking for finished products these days, not hope and promises. I'm happy to pay for things that interest me and look like they will add something to a game but I'm a lot less interested in paying up front for "someday"

To wrap up: Lots of mixed feelings on this one.

I know there's a lot of crankiness in this post. I like to think these are real issues in the tabletop games industry right now - how do you fund your projects? How do you keep them on track? How do you keep small game lines alive? I would not claim to have big answers - all I can do is relate what I'm finding along the way.