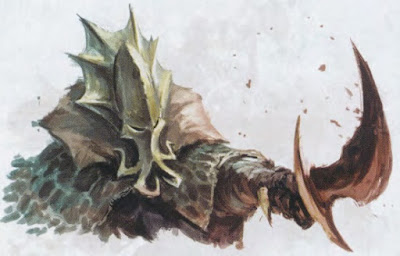 So I'm actually playing in two ... that's TWO (!) ongoing campaigns now - and have been for a few months! I could not tell you the last time that happened. I've been playing in one for about 5 years now - more on that in another post - and I've had a few one or two-shot games in that time but it's been longer than that since I played in two sustained games at the same time. I'm also still running a campaign or two myself so it's a really cool situation I find myself in game-wise right now.

I'm playing a kraken water-mage who is also an expert swordsman and it's been a lot of fun. The setting is roughly 1700's tech plus magic and some non-traditional fantasy races (like mine!). There is some one-way crossover with Earth of the same time period so we have the East India Company running around among other familiar landmarks. In the group we have the gun-nut, the trade specialist, the recon/sniper character, and out fearless monkey-cursed captain. So far it's been a little reminiscent of some old Traveller campaigns - lots of trading between different ports while following up on local problems/quests/missions and connecting some larger threads, all while trying to make some money so we can tackle larger issues.

Anyway here's a link to the session logs so far if anyone wants to see how a campaign like this can go: The Caribdus Cruise

BatRep of the Week: Armada!

Something a little different this week as Blaster and I dig back into Armada for a change:

First, a very casual intro by the guys at Shut Up and Sit Down:

Then another "how-to" with a European Champion:

Then the first of a series covering a normal game of Armada with the same two players: