Haven't posted much about 40K so I figured I would show my progress on the Eldar army so far this year. There's everything that's painted or started so far. 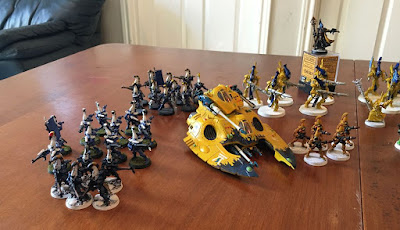 So there's 3 squads of Dire Avengers on the left - bases and fine-tuning of each squad is in progress. Next to them are the Fire Dragons and their favorite ride the Falcon grav tank. 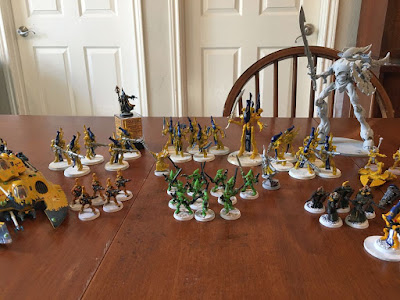 The meat of the army: three squads of Wraithguard, a Wraithlord, a Spirit Seer, and a (primed) Wraithknight. That's my wraith host, the big thing I started last Chrtistmas break and the only two pieces left to finish are the Spiritseer (no problem) and the Wraithknight (well ...) so I'm hoping I can wrap them up by this Christmas break. The finished Scorpion squad is right there in the middle and a finished Ranger squad is on the right. The one painted Farseer has been my HQ in every battle so far this year and is often joined by the unpainted Farseer in there as well. 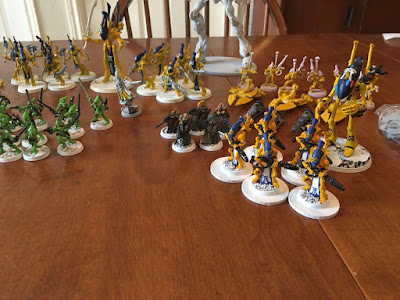 At the back are the work-in-progress guns and gunners of the Vaul's Wrath support battery. I'm debating whether to go ahead and finish them or to focus on the seer and the 'knight. There also an older metal Wraithlord (needs flock and a second gun) and some metal Wraithguard (just need flock) too. I wasn't going to use metal WG in this army but I keep coming across them already painted and sometimes it's a good deal so I may end up with a second Wraith Host down the road with minimal effort. Do I need one? No. It seems fitting for an Iyanden army though, and one day we might do another stupidly large game where I could use both at the same time.


Other elements: You can see the Swooping Hawks in baggies off to the right. I have two Wave Serpents primed but nothing more. I have three squads of Dark Reapers waiting on the shelf. That's really it. Most of the army will walk into battle but I'd like to get a 3rd serpent and use them for the Dire Avengers as their standard transports. The Scorpions usually start the game scouted or infiltrated up on the field. One squad of Wraithguard is often beamed into battle via webway portal with a Dark Eldar Archon. An Archon + warrior squad + raider is a small price to pay to be able to drop a squad of D-Weapons anywhere on the field with perfect precision. Beyond that one dirty trick it's a surprisingly mobile force as everything has Battle Focus so can shoot and move.


So far I am happy with it - it's formidable but not over the top like an all-scatbike army.  I'm hoping we can get in some more games soon, then I'll do an end of the year update with hopefully everything finished. 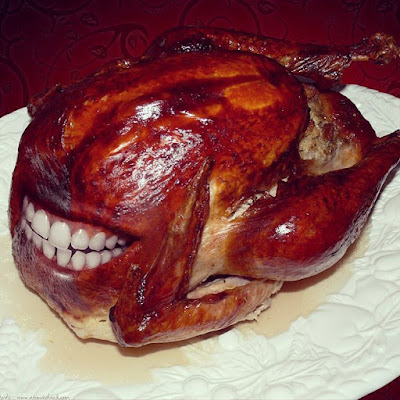 I have a week off but it's consumed with other things than posting. Lots of catching up around the house etc. I did manage to get some painting time in and I am also prepping for the Big Game on Friday.

Tonight is Apprentice Twilight's birthday dinner, tomorrow is turkey and football with family, then Friday is time with friends who are like family - it's a good week. I hope it's a good week for anyone who's reading this too.


Posted by Blacksteel at 2:29 PM No comments: