Campaigns of the last 10 years...and beyond! 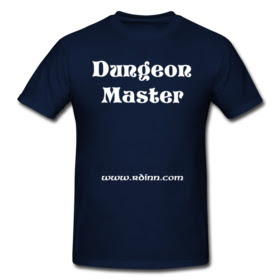 I was thinking about how I have mainly been a DM for the past 10 years, much more than I have been a player. I decided to make a list of the campaigns I have run from 2001 onward:

Current campaigns are the big 3:

Campaigns I hope to run in the future:

Posted by Blacksteel at 11:43 AM No comments: 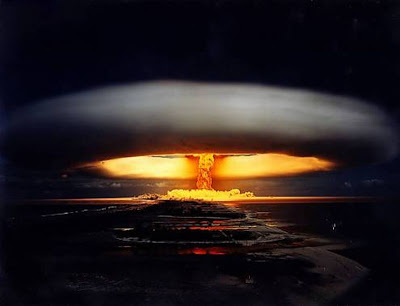 Inspired by my last post...I have had 3 campaigns in which players touched nuclear weapons
The first was a 2nd edition Gamma World campaign and I was the player who used them. I had a mutated wolf who had an immunity to radiation. There was a particularly pesky keep held by the Knights of Genetic Purity and they messed with us one too many times. We had come across a neutron bomb in or travels and the initial thought was to have the hawkoid PC just fly over it and drop it on them, but we figured out that he wasn't fast enough to get out of the blast radius. Instead he carried the wolf (who carried the bomb) over the keep and dropped HIM. The wolf then set up the bomb and started looking for place to hide. One small mushroom cloud later and the wolf unbars the gate and walks out without a scratch.
The second time was a few years later in my Rifts campaign when the players had located a Mechanoid factory in the ruins of Winnipeg, right by Detroit. They had looted some nuclear missiles from an unfortunate Coalition force and rigged them into an even bigger bomb (hey THEY put nuclear engineering into the game, not me). They had been itching to use it for a while and the Mechanoid installation was a perfect target. The power armor trooper fired up his SAMAS, the Dragon Hatchling spelled up, and the rest hopped onto the flying carpet. This motley squadron fought their way through a Mechanoid air patrol AND a Coalition patrol and then nuked that factory hi-fiving all the way home.
The third one was a Shadowrun game where the PC's were hired to drive and escort a truck across the city. The truck was a flatbed with something on it under a tarp and they were instructed not to disturb it. Now they had a similar mission earlier in their careers and they had disturbed it and "it" turned out to be a drugged kidnapped feathered serpent who was very unhappy when he awoke and smoked the first PC who went under the tarp.. They were much better about not looking at IT this time - until they were attacked by cyberzombies. They had to hide out and when they looked it was an old Soviet ICBM which was leaking something that glowed. During the climactic run for the border they were pursued and had some good firefights until finally the party's Gator Shaman truck driver decided that he had had enough and drove it off a dock into Puget Sound. I thought it would be interesting to see what the party would do with their hands on a nuclear weapon and it was - pity they didn't keep it longer, but they wanted no part of it.
Besides those above several Traveller campaigns have theoretically had nuclear missiles on board their ship but they never used them as they didn't want to get into matters of Imperial Law. Some Supers games have encountered them but they were never actually fired at or by the PC's.
Posted by Blacksteel at 11:00 AM No comments: